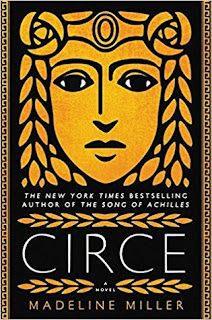 I'm still struggling to believe this moment is actually here. It was almost exactly three years ago that I read and reviewed Madeline Miller's stunning The Song of Achilles and essentially dissolved into a puddle of shock and awe. It was difficult to summon the will to move on in the wake of such a book. The crafting of it felt almost too good for this world, as though it had been created slightly above mortal ground and continued to hover there, just above us, in its natural state. So when I got wind that Ms. Miller was working on a new novel—that not only was she shifting from The Iliad to The Odyssey, but that she was focusing the tale on Circe—it was difficult not to will Chronos to speed up time so that I could have that book in my hands. To say that it was one of—if not the—most anticipated novel of the year for me is not any kind of exaggeration.


When I was born, the name for what I was did not exist. They called me nymph, assuming I would be like my mother and aunts and cousins. Least of the lesser goddesses, our powers were so modest they could scarcely ensure our eternities. We spoke to fish and nurtured flowers, coaxed drops from the clouds or salt from the waves. That word, nymph, paced out the length and breadth of our futures. In our language, it means not just goddess, but bride.

Circe has always been uneasy about names. The name by which the gods call her. The names by which they call themselves. Titan. Olympian. Daughter of the Sun. Nymph. Witch. The words that are permitted and those that are not. The children who are welcome at her father Helios' feet and those who are not. For much of her early life, Circe coasts under the ever-raging storm of her mother's petty schemes and her siblings' wars for dominance. Born first, but deemed least of her father's children, Circe is the butt of every joke. Pitied for her weak and scratching voice, her uncouth eyes, and her relative limpness in every way that matters to feckless deities. And yet, she never stops trying to find love and meaning and peace where there is none. Even her beloved little brother Aeëtes leaves her without a second thought when he is offered a kingdom of his own. Until one night, a turning point. Prometheus, a god himself, sentenced to be punished for his merciful gift to mortals, is hauled within their halls and whipped as a form of entertainment before he is to be chained to the rock for his crimes. Circe alone offers him drink, and their brief exchange hails the entrance of mortals into Circe's life. One act of mercy begetting many more—a long chain of actions and reactions, spooling out over the centuries and serving to outline the shape of one lone goddess' existence.


The anger stood out plain and clean on his face. There was a sort of innocence to him, I thought. I do not mean this as the poets mean it: a virtue to be broken by the story's end, or else upheld at greatest cost. Nor do I mean that he was foolish or guileless. I mean that he was made only of himself, without the dregs that clog the rest of us. He thought and felt and acted, and all these things made a straight line. No wonder his father had been so baffled by him. He would have been always looking for the hidden meaning, the knife in the dark. But Telemachus carried his blade in the open.

Madeline Miller deals in exiles. In the paths of individuals who are sent away, forced to flee—to other realms, to underground labyrinths, to lonely isles for the rest of their days. It is a long tale Circe has to share, and one that is difficult even for her to tease out how it may have begun and how it will likely never end. In fact, so much of the tale is threaded through with the search for a reason, if any, for her existence, for a purpose that will fit the shape of her hand and feel comfortable in her grasp for as long as she cares to hold it. From the opening lines, I was lost in Circe's story. Like her, I became enamored of each fragile mortal that crossed her path. Of Glaucos as he once was, of Daedalus with his marvelous hands and his quiet presence, of Odysseus and all his clever guises. And like her, I grew more and more uncertain—at times, fearful—of how the game would play out, of whether or not she would ever find the peace, the shelter, the companionship for which she longed. Of where and when mortality and immortality may meet and whether it is possible for anything to survive. It was a long journey, filled with pain and grief and merciless beings bent on their own course and leaving swaths of lives crushed in their wake. It was also unquestionably beautiful and sensitive in its rendering. Circe is another side of the same coin that is flipped in The Song of Achilles and that we watched tumble end over end to the earth. Different, yes, and cunning in its shiftiness. But also shining and true in the same sympathetic light. I closed the book feeling a deep certainty that Madeline Miller is of the same ilk at Circe, as Penelope, as those ancient weavers of cloth, of light, of both words and worlds. And looking around me, after having walked a time in the company of these women, the fabric of this world, too, seems to hold the imprint of their sure and steady hands.

Circe is due out April 10th.