Review | Any Groom Will Do by Charis Michaels 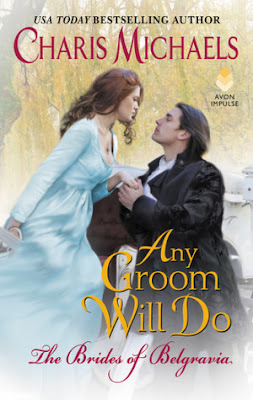 So, for the past few weeks, I have basically been on one massive historical bender. It has been rather wonderful, really. And it's probably worth warning you that the highlights are going to be making their way here over the next few weeks. The whole thing began with a Laura Lee Guhrke reread, which led to a binge of her recent books, which led to one headlong Julie Anne Long tear. Somehow, I'd only read three of her Pennyroyal Green books and inexplicably decided that was as far as I was going? Utter nonsense, that. I happily downed at least five more charming entries in the series and, somewhere along the way, I discovered Charis Michaels. For which thing I am absolutely delighted. Because Ms. Michaels has just a lovely touch. I started with her first series and moved on to her most recent release Any Groom Will Do―the first in her new Brides of Belgravia series. While I've enjoyed each of her books, this one is my favorite. Allow me to tell you why.

Willow has a plan. She is getting herself (and her two best friends) out for good. And if she has to advertise for husbands for all three of them, then so be it. She has lived the life her dead father and indifferent mother laid out for her long enough, and she will have no more of this lifeless inactivity. She is putting her considerable dowry up for grabs in the hopes of securing an inoffensive husband in need of ready cash who will allow her to live her own life―separate from his―in London, where she will be able to pursue her vocation as a designer. One who will, perhaps, not mind that children will never be a part of the deal. Time is, of course, of the essence. And so when one Lord Brent Caulder, Earl of Cassin, arrives on her doorstep in answer to her advertisement, Willow is determined he will be their ticket out. Caulder, unfortunately, is not nearly so sure. Desperate to save his failing estates and prevent his mother and sisters from destitution, Caulder hopes the advertisement's mysterious investor will finance his long shot business venture to the Caribbean. Marriage was not in any of Caulder's cards. And yet. Despite the patent insanity of Willow's plan, he finds it difficult to walk away from this isolated young woman intent on living her life, with or without him.


The risk of discovery by Lady Lytton was a welcome new source of panic, but Willow was too preoccupied to really care about her mother. Against all odds, the Earl of Cassin held great potential. His reserve. His caution. His willingness to flee the house. Very great potential, indeed.

And flee they did, down the corridor, through the ballroom, and out onto the terrace that led to the garden. They did not run, precisely, but they were hardly strolling.

The new location meant there would be less time for everything, of course, no more beating around the bush. He would have to declare himself, yea or nay. But perhaps this, too, was preferred. In Willow's view, she'd already said enough. All the while, he'd said―well, what had he said? He'd done little more than challenge her.

But he did not go, she thought.

Even now, he did not go.

That is one of my favorite (of many) things about Cassin. He does not go. If you enjoy a good marriage of convenience tale, then you do not want to miss this one. I fell instantly in love with Willow and Cassin and their avid (on her part), if unwilling (on his) alliance. The two of them (both individually and collectively) are so ridiculously endearing, it was pure pleasure following them along on their unexpected journey. Neither of their lives resemble the ones they ever saw themselves leading. And these unfulfilling, at times impossible, existences wind up converging in something of a grey area―one which Willow is convinced will lead to mutual (albeit separate) satisfaction and which Brent is certain will lead to naught but ruin. But it turns out that, when pressed, they neither of them are willing to give up on those lost lives. And, to his chagrin, Brent realizes he is willing to do rather more than he thought previously possible to support his family and give Willow a chance at independence. Solid sterling, is Cassin.


I'm leaving," he announced, resuming his prowl, "and I won't be back. I believe we've said all available words on the matter." When he came to the glass-paned terrace door, he stopped and tested the knob. The door yawned open to the cool morning. He remained where he stood and slammed it shut.

She watched his struggle. He'd said no in so many ways she'd lost count.

He went on, "Marrying a stranger for dowry money is utterly out of the question." He embarked on another lap of the room. He was a tiger in a cage.

Willow said, "Perhaps you should reconvene with your partners to gauge their current feeling on the matter."

"You've selective hearing," he said. "Or perhaps you think I'm coming 'round."

"What I think," she said, gathering her nerve," is that you do not not like me."

He stopped walking. He was behind her now.

"Is that what you think?" he whispered.

It's just every scene with these two. And the fact that they are straight with each other. From the start. Theirs is a genuine arc, its sweetness most essential to its success. And succeed it does. Michaels's dialogue is first rate, imbued with every complex layer of emotions her characters carry. Each restrained gesture, each quiet glance is delineated with grace. Her writing is at once light and certain, possessed of the emotional weight I always seek when I come to any story. I'm so pleased to have discovered her work this year, so looking forward to more to come.