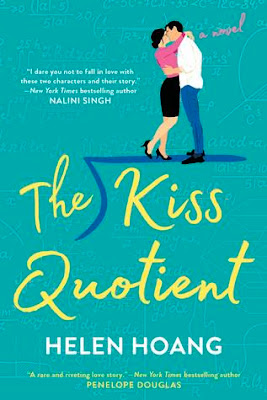 The Kiss Quotient crossed my radar around about the same time I got wind of The Wedding Date. Both debut books looked like exactly the sort of charming romcoms I wanted in my life at this specific point in time (always, really), and both sported perfectly adorable covers. I was intrigued not only by the obvious mathematical aspect of this novel, but with the fact that the protagonist is on the spectrum and that the story itself was inspired by Helen Hoang's own diagnosis with Autistic Spectrum Disorder. I found myself very eager to dive in and find out just what this gender-swapped Pretty Woman revision had to offer.

Stella Lane's mother will not leave her alone. She would like a suitable suitor for her daughter and the requisite grandchildren, and she would like them now. And Stella just can't with the pressure anymore. Relationships―interactions with people in general―have never been her strong suit. She far prefers math and her job as an econometrician to attempting to unravel the muddy subtleties that make up dating, to say nothing of the absolute minefield that is physical intimacy. Which is where the idea of hiring an expert comes into it. Stella figures if she can study and train, as it were, under the tutelage of a male escort, maybe, just maybe she'll be able to learn the skills to find someone she can and would want to be with. Enter Michael Phan, who Stella selects from the agency because he looks like Daniel Henney―one of her favorite K-drama stars. Michael has his own reasons for working as an escort, when it was never what he wanted to do with his life. But the demands of family and finances led him here, and he does take pride in being excellent at what he does. If only he didn't have to do it anymore. But when Stella outlines her unorthodox plan for him, even unflappable Michael is taken aback. He should leave. He really should leave. It's just that something about this efficient, self-conscious, highly intelligent, if unusual, woman will not leave him alone. And before he knows it, he is all in. Even knowing that there's no chance it can end in anything but disaster.

The Kiss Quotient is wildly entertaining, the kind of book that lures a smile to your face the moment you open it, the kind of smile that lingers undimmed until the moment you close the book and sigh in pure happiness. I closed it and wanted nothing more in this world than to read it straight through again the next day. Helen Hoang exceeded any and all my expectations, as did Stella and Michael, who were so likable and right that I hardly felt the passage of time as my eyes tracked across the page. How is it even possible to resist this setup? It is not. I am convinced it is not possible. As impossible as it is for Michael to walk way from Stella's stacks of ordered lists, her pristine, but empty house, and her unwilling but real need for someone she can learn (at her own pace and in her own time), who wants to learn her in return. And that is what they proceed to do, though thankfully nothing is glossed over in this story.

The progression of their relationship is halting and filled with missteps and moments of incomprehension and pushing back desires to run or just be done with this insane plan so that one or the other (or both) of them don't have to face the realities of how much they want to be together and how difficult that would necessarily be. To say nothing of the attendant (sometimes ugly) baggage of his occupation, the needs of the family he doesn't talk about, Stella's intense dislike of being touched, and the huge differences in their cultures and temperaments. But it is also filled with all of the undeniable reasons they should be together, with all of the minute ways they care for each other and unconsciously reshape their lives around that person that is somehow their person. I loved the slow-building realization that while this crazy notion of Stella's was undoubtedly flawed, it also managed to start two solitary souls on the path to something not only valuable, but vital. As Stella says,


I don't want just a night or a week or a month with you. I want you all the time. I like you better than calculus, and math is the only thing that unites the universe.

This line is my very favorite line of all the lines because it is so very Stella. Because Ms. Hoang so deftly captures the day-to-day realities of Stella's life, this line came along and flooded me with its import, packed as it is with all of her need for order and space and reason together with her longing for this beautiful, unexpected man who somehow seems to have eased his way seamlessly into her life, taking care to take up just enough but not too much of her order and space and reason. Who makes everything brighter and who needs her, too.


Michael was mint chocolate chip for her. She could try other flavors, but he'd always be her favorite.

They're so kind to each other, Michael and Stella. They are so kind and dear. Swoony, funny, heart-stopping, and massively fun, The Kiss Quotient is an absolute keeper.

The Kiss Quotient is out today! 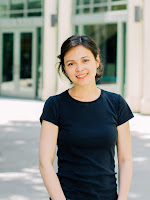 Helen Hoang is that shy person who never talks. Until she does. And the worst things fly out of her mouth. She read her first romance novel in eighth grade and has been addicted ever since. In 2016, she was diagnosed with Autism Spectrum Disorder in line with what was previously known as Asperger's Syndrome. Her journey inspired THE KISS QUOTIENT. She currently lives in San Diego, California with her husband, two kids, and pet fish.