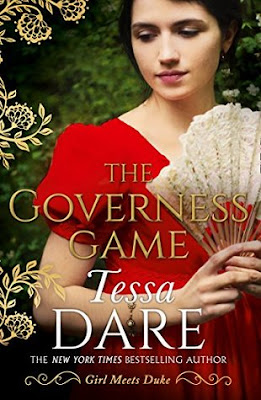 I think this is (shamefully) the first Tessa Dare book I've reviewed on the site. I believe I initially read a couple of her Spindle Cove books awhile back and didn't really land upon the "right" one for me. Then I gave Romancing the Duke a try and found it to be ridiculously charming. The rest of the books in that series weren't quite my cuppa, but that first one was so fun that I went back and found the right Spindle Cove novel for me (Any Duchess Will Do, in case you're interested; ugh, I love that book). Which brings me to The Governess Game, which is a delight from start to finish. That's the wonderful thing about books by talented and prolific authors. They're not all necessarily going to work for you, but it is so lovely reading your way through as time and whims allow and finding the ones that are yours.

Alexandra Mountbatten tells time. That is to say, she sets clocks. For a living. Carting her instruments from aristocratic house to aristocratic house, she pays the bills during the day and watches the stars by night, hoping one day to spot a comet she can call her own. And that is exactly what she thinks she's there for when she arrives on Chase Reynaud's doorstep―to set the time. The dissolute heir to a dukedom, however, is in desperate need of a governess to manage his two young wards. Taking her for the latest in a long line of applicants for the governess position, Chase quickly realizes what gold he's found in Alex and won't take no for an answer. Happily, Alex is the opposite of a pushover. She rightly sizes up the situation, hands Reynaud his hat, and heads for the hills. Matters are made worse by the fact that the two have met before, though Chase does not appear to remember their previous encounter. Alas, circumstances conspire to throw the rake, the budding astronomer, and the two varmint children together again. And before long, they're hopelessly (and entertainingly) entangled in each other's lives.

Witness the delicious disaster of their first (or technically second) meeting:


Alex couldn't hold it in any longer. She buried her face in her hands and moaned into them.

He leaned toward her at once. "Are you ill? I do hope it's not typhus."

"It's disappointment. I expected something different. I should have known better."

He lifted an eyebrow. "What precisely were you expecting?"

"Come now. That kind of protestation only makes a man more intrigued. Just have out with it."

"A gentleman," she blurted out. "I expected you'd be a gentleman."

"You weren't wrong. I am a gentleman. Eventually, I'm going to be a peer."

"I didn't mean it that way. I thought you'd be the respectable, considerate, honorable kind of gentleman."

"Ah," he said. "Yes, that was a mistaken assumption on your part."

"Obviously. Just look at you."

I dare you not to grin your way blithely through the entirety of this charming novel. From their first encounter in Chase's glorified man cave to the first (of many) wakes they are forced to preside over on behalf of Daisy's dolls, I knew these characters were going to worm their way into my affections with the greatest of ease. And so they did. Alex is the core. Alex is the reason any of it works at all. She will not be defeated, no matter how many skies have fallen. And in the lives of one man who never should have been the heir and two young girls who never should have been left on their own, let alone dependent on a rapscallion bachelor who has no idea of how to look after them, many skies have fallen indeed. It takes all Alex has to keep them together (as they should be) and force them to see just why they need each other (as they do). And, of course, Chase is more than he appears. And smarter than anyone but Alex gives him credit for. And if Alex is the one who can see Chase and the girls clearly, Chase is the one who can see Alex. They take care of each other so beautifully. They take care of each other.


You don't need to pity me. I'm here. And I'm alive. So there's your answer, Chase. When am I giving up? I'm not. I did not give up on myself then. I am not giving up on you now." She smoothed her apron. "Now I'm going to tidy myself up, take the girls for ices, eat two of them myself, and not bring you any. When we return, I'll send Rosamund and Daisy in to visit you, and you will behave. Treat me as you like. But you will not belittle those girls for loving you. I won't allow it. And do not ever waste your breath again with more of that 'lost cause' nonsense. Consider yourself found.

All my spinning emotions came together in that last firm, wonderful line. "Consider yourself found." I adore an uncompromising heroine (as you know). Alex is one of the best. Her own history is as unconventional as one might expect from a scientifically-minded independent lady timekeeper in Victorian England. And then there's Chase's dogged desire to go to his grave unattached and unmourned, which does rather put a damper on anything that might resemble a relationship. And, of course, neither of them is ignorant of the multitude of reasons why she cannot be anything but his governess. And yet. They fight against those constraints anyway. Not always in concert and not even always for the same reasons, but they fight. Against each other's demons when they cannot fight against their own. Which is perhaps one of the truest definitions of love in the end, isn't it?


I think the world is spinning."

"The world is always spinning."

He exhaled in a soft groan.

"Well, that's the truth. It's spinning all the time."

"How about this? What if I say that you're my world. You're not spinning."

"You are ruining all my sweet nothings."

"That's just it." She put her hand atop his chest, covering his fiercely beating heart. "To me, the truth doesn't ruin anything. Why should understanding the universe diminish our sense of wonder at it? We are spinning around and around, at hundreds of miles an hour, on a rock in the midst of a fathomless universe. Isn't that awe-inspiring enough?"

"If we're spinning at hundreds of miles an hour, it seems a miracle that we stay on this rock at all."

"That's not a miracle. That's gravity."

He kissed the top of her head. "I love you. There. Have you some astronomical way to ruin that?"

"No." She was grateful he couldn't see her face contorting with elation. "That's a miracle.

I love them so. Don't do yourself the disservice of missing them.

The Governess Game is out today!