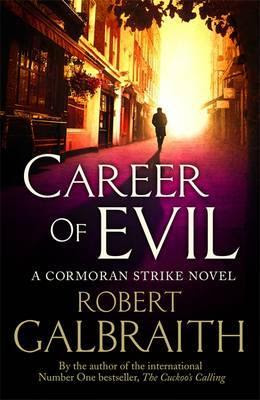 No joke, I'm a little shaky right now. I just finished a headlong binge―scratch that, I just paused three books into a headlong binge of Robert Galbraith's (aka J.K. Rowling's) Cormoran Strike crime series. I say paused because I downed the first three books back to back to back, and the fourth book is due out September 18th. How is that for lucky?? I never get that lucky with my reading timing! And even so. I'm still severely uncertain of my ability to actually survive until Lethal White comes out. Because this series grabbed me by the throat and has not let go. From the opening prologue to The Cuckoo's Calling, I was wide-eyed and ravenous. I felt positively giddy to be reading a series by Rowling again. After all this time. I couldn't stop myself long to enough to write up true reviews of the first two books, but given the imposed wait for book four, I felt I had to talk about Career of Evil, the third book in the series. And yes, many of you have kept current on this series and sang its praises loudly. And yes, I have no excuse for waiting as long as I did.

Strike could see Robin's expression reflected in the round mirror standing beside the sink, where he was shaving. The police had taken away the leg at last, Strike had declared work suspended for the day and Robin remained at the little Formica table in his kitchen-cum-sitting room, cradling a second mug of tea.

"To tell you the truth," he said, strafing stubble from his chin, "I think it's only three.

Cormoran Strike's business has picked up nicely since the addition of one Robin Ellacott, assistant extraordinaire, to say nothing of the massive press coverage that unavoidably surrounded his previous two high profile cases. And if Robin's impending wedding is approaching faster than either of them might be strictly comfortable with, well, neither of them have anything they'd like to say on that matter. And if Strike's latest "girlfriend" is more interested in educating him in classical music than she is actually knowing anything real about him, well, neither of them have anything they're willing to say on that score either. But just when the two unlikely partners feel like they're settling into a more secure routine, the body parts start arriving with Robin's name on the tags. And suddenly all that press attention turns on their small business, as no one in London is interested in hiring a private detective who receives pieces of dead bodies on a regular basis. And so not only are they back to scraping by financially, but they're tracking a serial killer who has clearly placed Robin on his list. And all of this is set against the background of new revelations on their individual complicated backgrounds, as well as the looming inevitability of painful changes in their working and personal relationships once Robin marries.


Robin was a decade younger than Strike. She had arrived in his office as a temporary secretary, unsought and unwelcome, at the lowest point of his professional life. He had only meant to keep her on for a week, and that because he had almost knocked her to her death down the metal stairs when she arrived, and he felt he owed her. Somehow she had persuaded him to let her stay, firstly for an extra week, then for a month and, finally, forever.

This third installment in the series is complete and utter bibliocrack. I mean, the entire series qualifies as such for me. But at this point, I'm so invested that the thought of being without Robin and Strike is physically painful to me. Hence the current three-week-long agony. I can't even bear to think about the years-long wait for the fifth book (I'm just telling myself there will be a fifth book; I'm quite deaf to any other outcome). It's just that they're so well-matched, are Robin and Strike. So complementary. As professionals, as partners, as investigators, and yes, of course, I am hoping as a couple. But the burn in this series, my friends? It is sloooooooooooow. It is the slowest of slow, slow burns. And there are other people. But even that is perfect. Because they're so dashed real. Their lives are messy, especially Strike's. And they can be maddening. They've made mistakes and been hurt and developed appalling habits and learned to cope, not always in extremely (or even remotely) healthy ways. Which means nothing happens easily or moves along quickly. And so very much is unsaid. But their wonderful regard for one another just kills me. They frequently put me in mind of Patrick and Angie from Dennis Lehane's Kenzie & Gennaro noir series, which is the highest of praise in my book.


Almost angrily, he added together those things he knew and had observed that marked her as profoundly different from him, as embodying a safer, more cloistered, more conventional world. She had had the same pompous boyfriend since sixth form (although he understood that a little better now), a nice middle-class family back in Yorkshire, parents married for decades and apparently happy, a Labrador and a Land Rover and a pony, Strike reminded himself. A bloody pony!

Then other memories intruded and a different Robin peeled away from this picture of a safe and ordered past: and there in front of him stood a woman who would not have been out of place in the SIB. This was the Robin who had taken advanced driving courses, who had concussed herself in the pursuit of a killer, who had calmly wrapped her coat like a tourniquet around his bleeding arm after he was stabbed and taken him to hospital. The Robin who had improvised so successfully in interrogating suspects that she had winkled out information that the police had not managed to get, who had invented and successfully embodied Venetia Hall, who had persuaded a terrified young man who wanted his leg amputated to confide in her, who had given Strike a hundred other examples of initiative, resourcefulness and courage that might have turned her into a plainclothes police officer by now, had she not once walked into a dark stairwell where a bastard in a mask stood waiting.

Ah, Strike. The struggle is real. Which brings me to the mystery/crime aspect of these novels. Though I will always spend time talking (and thinking) about the relationship, it takes a decided backseat in this series. These books are first and foremost murder mysteries and they are dark ones. I cannot emphasize enough how grisly these crimes are and how unsavory so many of the characters. Though, in true Rowling style, the entire motley casts in each volume are so downright Dickensian in their depiction that it's difficult not to feel the magnetic pull despite the grim trappings. I'll admit, I had to let my eyes gloss over a few murder scene descriptions (most notably in The Silkworm). And in Career of Evil we get a number of short chapters from the killer's POV. I was forced to tread lightly there as well. Because serial killer. And body parts. And extreme misogyny. But. That said. And noted. Robin's wonderfully strong arc is a balm and a balance for the darkness that surrounds them. And, in the end, these two humans? I just want to watch them solve crimes and not talk about their feelings for the foreseeable future. And that is my plan.


At least you didn't punch her," said Robin. "In her wheelchair. In front of all the art lovers."