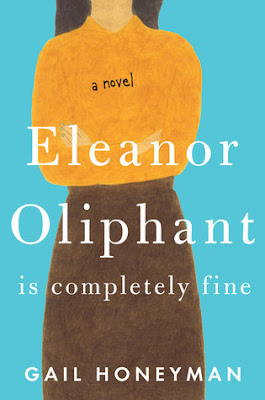 This title. This title is my favorite book title in ages. No question. It made me feel things for the titular character, made me long to meet her and join her on her completely fine journey, long before I ever picked up the book itself. My mom gave me a copy for my birthday back in the summer, and I kept it on my nightstand for ages just admiring the colors and the font and the general splendor of what might lie within. Basically just another example of present day me wanting to kick past myself for not starting a book sooner. Because this book is so much better than fine. Eleanor Oliphant is Completely Fine is Gail Honeyman's debut novel. I am waiting in delicious anticipation for her sophomore novel.

Eleanor learned long ago that the only socially acceptable answer to the question "How are you?" is "Fine." She learned long ago, reinforced by her mother's constant and stringent dictums, that she wasn't like other people. And, what's more, she shouldn't be. Other people were quite dreadful, and should never serve as suitable outlines for proper behavior. And so she has gone through life, constantly perplexed by the behavior of others, by their informality, their audacity, their continual, inexplicable bleeding outside the lines. And life is fine. Eleanor is fine. Content with her solitary existence. Competent at her office job. Willing to suffer through her weekly calls with Mummy. Until one night she finds herself at a local pub listening to a band. And without warning, she knows. She knows she is meant to be with the lead singer of the band. And so she sets about rearranging herself and her life so that when the inevitable meeting comes, all will fall seamlessly into place. Around about the same time, she is thrown together with Raymond, a man who works in her company's IT department and who seems to enjoy her company, though she is nothing but befuddled by his. And so, bit by bit, things in her meticulously ordered life begin to change, whether Eleanor is ready or not.


Raymond sent me an electronic mail message at work the next week―it was very odd, seeing his name in my in-box. As I'd expected, he was semiliterate.

Hi E, hope all good with u. Got a wee favor to ask. Sammy's son Keith has invited me to his 40th this Saturday (ended up staying late at that party BTW, it was a rite laugh). Fancy being my plus one? It’s at a golf club, there's a buffet? No worries if not―let me no. R

A buffet. In a golf club. The Lord giveth and the Lord taketh away.

Eleanor's dry-as-a-vodka-martini sense of humor is one of the sheer highlights of this book. Her inner dialogue surrounding her efforts to parse the emotions and actions of those around her are as delightful as they insightful. And always lurking beneath them are the inescapable, if fleeting, references to the mother that shaped every aspect of her life and whose presence is felt, even now, in every one of her thoughts and actions. I felt the entire length of the novel as though I was waiting for the other shoe to drop, for the last remaining length of the thread to unravel. Which is why Eleanor's sense of humor, and Raymond's wonderfully offbeat and accepting interactions with her are so vital to the story's success, saving it as they do from the shadows that loom so eerily from the corners of the room.


I watched him amble toward me. His peculiar loping walk was almost endearing now―I wouldn't recognize him if he started to walk as normal men did. He had his hands in the pockets of his low-slung denim trousers, and was wearing a strange, oversized woolen hat that I hadn't seen before. It looked like the kind of hat that a German goblin might wear in an illustration from a nineteenth-century fairy tale, possibly one about a baker who was unkind to children and got his comeuppance via an elfin horde. I rather liked it.

I laughed out loud on multiple occasions while reading Eleanor's story. And I think that Raymond rather likes Eleanor for the same reasons she gets on with him, though her loping walk and elfin horde hat is worn mostly on the inside (her visible facial scars notwithstanding). The way Gail Honeyman manages to insert the reader as one of Eleanor's "insiders" (though in practice, she actually has none) is such a crucial tool, so that while we see the way most people are offput by our heroine, we never are. Because we walk home with her at night, and sit up eating frozen pizza, and stick to the plan each day. We know what her shoes feel like, and they are comfortable even though we can see how strange they may look to those outside the know. And it is this sense of being on the inside that makes the final reveal that much more effective. Because though we may have suspected, it creeps up just the same as it does on Eleanor. It creeps up on such soft feet. And how happy I was that by that time she had Raymond. And his mum. And Sammy the old man they helped on the street. And a boss who values her for the good work she does. How glad I was. I was so incredibly moved by this woman's story. And by the way she saves herself. I'll leave you with my favorite passage in the entire book, out of context as it is, because that final sentence instantly entered my personal canon. And I recite it to myself in comfort.


I took a breath. Back in that house, on a good day. Stripes of sunshine on the carpet, a board game set out on the floor, a pair of dice, two brightly colored counters. A day with more ladders than snakes.


A day with more ladders than snakes. Sigh.