Review | The Hollow of Fear by Sherry Thomas 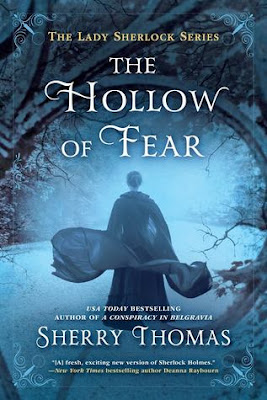 This series. My feelings for it are fierce and tangled, much like the ties that bind its protagonists. Charlotte, Lord Ingram, Livia, Inspector Treadles, Bancroft, Lady Ingram . . . characterize them each how you will, but there is nothing equivocal about them. While there is infinite room for every sort of gray area in their circumstances, their histories, and their difficult presents, the feelings that they engender (at least in me) are nothing if not strong one way or the other. And really, I wouldn't have it any other way. Who wants to feel the least bit milk-soppy about the people who inhabit their wonderfully complicated Victorian mysteries? Not me. That is who. Which is to say that I was prepared for a tumult of emotions as I embarked on this the third volume in Sherry Thomas's Lady Sherlock series. Just, as it turns out, nowhere near prepared enough.

Be warned: unavoidable spoilers for the first two books abound.

Death has finally found its way to Lord Ingram's door. Though it may have seemed to him and to those who know him best that he was already bearing one man's fair share of suffering in his life, the term takes on new meaning when the body of his estranged wife is found on the grounds of his country estate. He is already playing impromptu host to a number of his neighbors who were forced to flee their house party nearby, and the group just happens to include Charlotte Holmes's sister, Miss Livia Holmes. All hell breaks loose in a matter of a few short hours, and both the London gossips and Scotland Yard are calling for his blood in short order. And Charlotte, the only person who can really help him, the only person he actually wants at his side throughout this ghoulish ordeal, is forced to do so in disguise. Unable to disclose her identity for fear of betraying her oldest friend, Charlotte enters a race against time and the mysteriously related Moriarty to clear Lord Ingram's name and uncover the true culprit.


Charlotte Holmes. I thought I might see you here."

The voice belonged to Lord Ingram, but slightly raspy, as if he were under the weather―or recovering from a night of hard drinking.

She turned around slowly. "Hullo, Ash."

A complicated pleasure, this man.

A complicated pleasure, this book. I knew it would be far more personal than either of the previous adventures. But I had no real comprehension of just how grave this tale would be, when the danger comes calling at the very door of the one character who deserves it the least. Because it's Ash. It's Ash. And from the moment Charlotte turns in his orchard and says, "Hullo," I was full of fear. I mean, I was flooded with anxiety for all three hundred and twenty-nine pages. Every last one of them. And so while I might have reasonably expected to enjoy the larger quantities of page time in which these two dear characters are actually together, the whole thing was neatly sideswiped by the terror of the unknown and of what they both actually stood to lose. Being somewhat conversant with Ms. Thomas's willingness to put her characters through their paces, as it were, I felt no sense of assurance that the pain would not be too much to bear. In point of fact, every single thing about The Hollow of Fear felt very nearly too much to bear. And while that may sound dire, and it is, this book is also threaded through with small and perfect moments, with Thomas's trademark empathy and insight. As always with this series, many of my favorite moments involve the realities of the lives of women and the truths that are so difficult to speak.


Lady Ingram hadn't been angry because she'd wished to marry a different man, as Mrs. Watson had thought at the time, but because her life hadn't been her own.

Charlotte did not pity Lady Ingram―the woman played no small role in her own fate. But she sometimes thought of the former Miss Alexandra Greville, brought to London and told to smile, told to be happy that an eligible man loved her, told that upon marriage she would have everything a woman could desire.

When it should have been obvious to all who knew her that such a life would unravel her. Yet they'd pushed it on her with all their might―and made it plain that for her to do anything else would be a gross betrayal of her family.

Perhaps she had always been a monster, but even the lady monsters of the world couldn't escape the expectations that came of being women.

My, what empathy. Even the lady monsters. My Circe-loving heart all but exploded at that particular moment. And then this between Lord Ingram and Charlotte:


Is it true, what I once heard your sister say, that you don't like to be embraced?"

She took some time to think. "Sometimes Livia needs to hold someone, and I'm the only suitable person nearby. When I was little, I used to wriggle out of her arms and escape to a corner of our room. But it wasn't so much that I couldn't stand being held as that I didn't want to be held indefinitely. Later I taught myself to count to three hundred to mark five minutes―which helped me to realize that she needed only about half that time. I can take two to three minutes of being held. But Livia remains hesitant to this day―she's still scarred by my bolting away from her embrace."

He would be, too.

In fact, sometimes he felt scarred by her, even though she had never done anything except be an excellent friend.

Ah, Ash. It's untenable, the whole situation. But I shall continue to hope. And while I was pleased with how things played out on nearly every level, there was a part of me that felt a twinge of disappointment at how one aspect of their relationship developed. As I reflect on it, my reaction may be simply that it felt somewhat abrupt, that I would have appreciated a more measured progression, given how restrained and private these two individuals are. I value those two qualities in them so very much, not the least because I know I recognize them in myself. That was my one qualm. But honestly, the writing. It continues to slay me. The complexity of emotion redolent in every word is a joy to read. Sherry Thomas absolutely nails it, and I am nothing if not dying for the next book. A final favorite passage:

She wasn't sure that she wanted to understand the full spectrum of human emotions―everything that remained seemed dire to one degree or another. But this warm, silly mutual delight, this she wouldn't mind experiencing until she comprehended its place in the world.