Review | More Than We Can Tell by Brigid Kemmerer 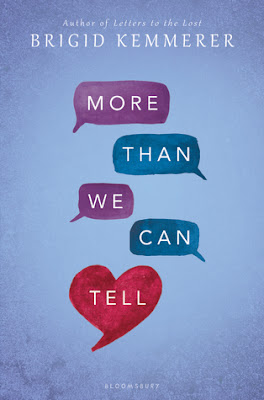 My online book group does a Secret Santa exchange every year, and this last year mine knocked it out of the park. She sent me a copy of Brigid Kemmerer's Letters to the Lost along with the most creative accompanying letter and series of clues and mementos tied to a fictional relationship not even wholly of this world. It tied in perfectly with the book and, once I read it, her creativity and extra mile effort meant that much more. I thoroughly enjoyed the novel and immediately sought out the companion book featuring Declan's enigmatic best friend Rev. More Than We Can Tell begins shortly after the events of Letters to the Lost and, while Declan and Juliet are in the story, it focuses primarily on Rev and a new character named Emma Blue. I was already half in love with Rev Fletcher from the glimpses we get of him in the first book, so it was in no way surprising that I fell into his story without a hitch. This book can definitely be read as a standalone, though I think it is enhanced by knowing Declan's story and having a chance to see Rev from Dec's perspective before being plunged into what his life is really like.

No one has ever worked harder to keep himself in check than Rev Fletcher. Since being adopted by his foster parents ten years ago, he has spent every minute of every day not being his father. He has spent every minute of every day being good, helping his parents with the other foster children who've passed through their home, and being there for his best friend Declan Murphy after his father went to prison and his mother remarried. And all that quiet discipline (and late night workout sessions) has been successful. Rev keeps his head down and his hood up. And if he never wears short sleeves or tells his parents (or even Dec) about his darkest fears, that just means no one he loves has to live with them. But all of that comes to a screeching halt when he receives an email from his birth father. Dripping with that old familiar disdain and command, the short email sends Rev into the kind of tailspin he hasn't experienced since social services removed him from his home (and his father's destructive reach) once and for all. But the emails keep coming, insidious in their ugly charisma, clawing their way into Rev's head through the Bible verses he recites to himself like a talisman. Then one day he runs into a friendly dog, trailing an inquisitive girl carrying her own set of troubles. Emma Blue is a talented coder and game designer. Hoping to impress her gamer father while simultaneously run under her disapproving mother's radar, Emma runs her own public game. But a recent troll seems to have it out for her, and the threats are becoming fast and increasingly furious. And as Emma and Rev haltingly exchange pieces of themselves and their respective struggles, the darkness that pursues them circles ever tighter.

You're afraid," I whisper.

He flinches―but doesn't correct me. The fingers brushing through Texy's fur are tight, almost white-knuckled.

I consider my hypocritical mother, my laid-back father. We've argued, but I've never been afraid of them.

Abruptly, he unfolds from the ground. He's bigger than I expected, tall and lean with broad shoulders. He moves like a ninja, all silent, fluid motion.

Looking at him now, I can't imagine him being afraid of anything.

He sounds a little spooked, so I'm surprised when he puts out a hand to help me up. He's strong. His grip makes me feel weightless.

Once I'm on my feet, he doesn't move. Light from somewhere catches his eyes and makes them glint under the hood. "Thank you."

"For seeing me." Then he turns, jogs across the street, and disappears into the darkness beyond.

This scene is taken from the first time Rev and Emma meet. When he needs to escape his house and think about the things he can't tell his parents, Rev goes to the nearby church. Emma walks her dog in the same area. And thus begins a series of meetups whenever one or both of them need to talk to someone not intimately involved in the unpleasant details of their lives. What I love about both stories is that, while Rev does have one indisputably horrific biological parent, his adoptive ones are gold, and Emma's parents are both complicated individuals who are neither vilified nor angelic. And they are all directly and consistently involved in their children's lives in a way that feels very organic and true to life. Rev and Emma are individually and collectively compelling―a feat of storytelling, in my opinion. They are as magnetic alone as they are together. Though I will say that nothing in this world could compel me to look away when they were together. Whew. Well done, Ms. Kemmerer. Truly. I loved Rev so much in the first book, but I had no idea what was lurking beneath his dark hoodies then, and the truth is so much more than devastating. But while I kept wishing it away for this poor, beautiful boy, I was so relieved he had Dec. So relieved to see Dec refuse to abdicate his role as best friend and protector, even when Rev would deny needing one. They had each other. One of my favorite of their conversations:

My breath shakes. "Do you know the story of the Prodigal Son?"

He sighs. "I don't remember the whole thing."

So I tell him the story.

He listens. When I'm done, he says, "What does that have to do with anything?"

"I didn't stay with my father. So I'm obviously not the devoted son."

"But is that saying that if I went back to him, he'd welcome me with open arms? Am I supposed to be that son?"

"Are you listening to yourself right now?"

His eyes are dark and serious. "Neither. Is that what you need me to say? You're neither son."

"You're not selfish. You wouldn't be the son who asks for his money and leaves. And you're not spiteful. You don't resent anyone, even the one person you should."

I flinch again. "Don't you understand? I have to be one or the other."

"No, you don't! You moron, there are three people in the story."

"You're neither son, Rev. If you're anyone, you're the man who watched his kids act like total dicks, only to stand there with open arms and forgive them."

I'm speechless. I might be gaping at him. As many times as I've read that parable, I've never considered a third perspective. But of course it's right there. It's so clear.

Declan pulls his pillow away from the wall, fluffs it up, and lies back down. He yawns. "Now. Tell me about the girl.

These two boys. They break my heart. I enjoy the pacing of Brigid Kemmerer's novels so much. They proceed with intention and care, unrushed and refined. This marching to the beat of their own drums is refreshing and gives the sense that the characters are truly driving the story's development―a trait I will always note with appreciation. I thought that Letters to the Lost was a strong contemporary, and I thoroughly enjoyed it. But I loved More Than We Can Tell. It is a story of a boy who is given the very worst life has to offer, who is lost and then is found, who is given the chance to reclaim his life and rename himself and who does so with determination and integrity. And, when his past comes back to haunt him, he fights. And, when he is drowning and sheer will and strength cannot save him, he reaches out to the parents and friends, both new and old, who love him. In the end, love is not hard to recognize. It has shown itself all along by its actions. And Rev and Emma, they see it for what it is.

We all push sometimes, just to make sure someone is on the other side, pushing back.