Review | All the Walls of Belfast by Sarah J. Carlson 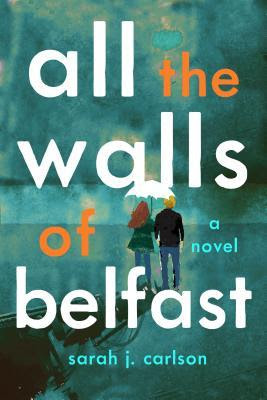 I have had a string of lovely successes with contemporaries lately. I wonder, sometimes, about the phases we go through, both in reading and in life in general and whether or not (or where) they align. I'm not always able to see the patterns amid the daily vicissitudes, but I wonder about them often. Several months ago, I saw the cover for Sarah J. Carlson's debut novel All the Walls of Belfast and thought I might have died and gone direct to heaven. The title alone is my favorite of the year, hands down. I don't even care if those are fighting words. It is the best title of the year, so there. And, happily, it has a cover to match that beauty, all orange and green and hints of the walls that make up its title. I could only hope that the content matched. Somehow I knew it had to.

Fiona grew up in America. From the time she was two years old and her mother took her and fled Northern Ireland for the unknown wilds of Wisconsin, she has believed that her father was dead. And now, on the cusp of graduating from high school and applying to colleges, Fiona discovers that her mother lied to her all those years and that her father and stepbrothers are, in fact, alive and well. More than that, her father very much wants to meet her. Which is how she finds herself alone on a plane to Belfast to meet an entire family and history of which she knows nothing. Danny has lived in Belfast his entire life and is quietly (and desperately) counting down the days until he can leave. Growing up in the Shankill, Danny has an abusive and alcoholic father, indifferent brothers, and a mother who died in a bombing when he was a boy. He's spent his life trying to lay low and do well in school so that he can join the British army as a nurse, escape the violence of his childhood, and do some good in a hopefully distant part of the world. What neither of them realize is that one chance meeting will alter the course of both of their lives. If they manage to survive the repercussions.

The immigration officer flipped through the empty pages, then raised an eyebrow at me.

"Welcome home, then," the officer said.

All the Walls of Belfast is being billed as part West Side Story, and the similarities are undeniably present. But it is also very much its own creature in all the best ways. This novel is both incredibly sober and achingly romantic, though neither tone overwhelms the piece as a whole. This balance Ms. Paulson achieves struck me as so skillfully wrought, as it meant that both Fiona and Danny felt their ages. They reflected their wildly different upbringings. We got to spend sufficient time with them each on their own, with their families, and together just the two of them. There were no sweeping escapes, no time away from time, no unrealistic moments for the sake of manufactured drama or faux romanticism. As I said, it is a tale with gravity to it, set as it is on separate sides of a peace wall, in both the Falls and the Shankill areas of Belfast, in the wake of The Troubles. And it highlighted for me, a clear outsider, how alive and present and breathing the legacy of that decades-long conflict truly is. It initially put me in mind of the lovely Eva Underground, as both books treat lingeringly problematic periods in European history in such thoughtful and resonant ways.


My Physics Club T-shirt was mostly dry. He draped the dripping hoodie over the radiator. I sat on his neatly made bed. Each mattress spring poked me. A British flag hung right next to me. At the foot of the bed was a shredded poster; one piece had a soldier with a medic armband.

"Will you take tea?" Danny asked.

"I don't drink tea." I just wanted some tape to fix his dream.

"Right, yous threw it all in the Boston Harbor.

This rare lighter moment is shadowed over by the ever-present barriers between them―Danny's fiercely loyalist upbringing and father and the extremely complicated history surrounding Fiona's republican father and stepbrothers. There is nothing glossy about this tale. Rather, its extreme beauty is tucked away in every loving, yet unflinching detail, in the meticulous depictions of this war-torn city and its wounded people. It is such a deeply personal story, its empathy comprehensive. It quite took my breath away.


Dad stopped a yard from me. His weary hazel eyes, spotted with green, looked me over.

As much as I tried to picture Dad's sordid past―fingers nestled in blue-and-red wires making bombs; wearing the ski mask, sunglasses, and the beret with the Easter lily; shooting at British soldiers―I couldn't. Right after I was born, he'd held my whole body in his hand.

All the Walls of Belfast is an instant entry on my Best Books of 2019 list. Please go find a copy today.