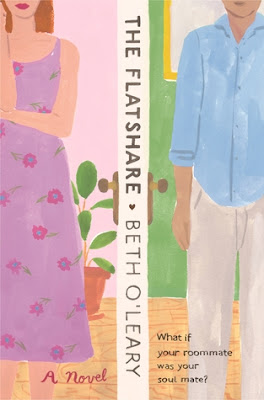 All it took was hearing the basic bones of the premise of Beth O'Leary's debut novel The Flatshare for me to determine I would absolutely be reading it as soon as I possibly could. I was so delighted to be granted access to an advanced reading copy by Flatiron Books. Even better, it became apparent from the moment I read the first few lines that this reading experience would take place in one headlong rush. No significant breaks allowed, let alone required. The Flatshare was published first in the UK and then slightly later here in the U.S. I dithered over which cover to buy as both have much to recommend them, but I finally decided on the U.S. cover (pictured here). I just love the two of them standing on either side of the same door, the tiny heart between the title and author name.

Tiffy is in a massive, massive bind. Out on her ear after breaking up with her exceptionally controlling boyfriend, she needs an inexpensive place to live and she needs it yesterday. Despite her friends' significant misgivings, she decides to check out an ad for a flatshare. The man who lives there works nights and is looking for someone who will only inhabit the flat during the night and then be gone all day when he is home sleeping. They will share a bed but never at the same time, and they will agree never to even see one another. Though the situation smacks of odd (to say the very least), Tiffy is desperate and in the market for some solitude. Thus the deal is struck. And so Tiffy and Leon become flatmates. And the situation actually seems to work. Slowly they begin to communicate solely through Post-it notes stuck here and there to every available surface in Leon's flat. And these two utterly different individuals strike up an unlikely friendship that gradually develops into something more.


I smile. The note is stuck on the fridge, which is already one layer deep in Post-its. My current favorite is a doodle Leon did, depicting the man in Flat 5 sitting on an enormous heap of bananas. (We still don't know why he keeps so many banana crates in his parking space.)

I rest my forehead against the fridge door for a moment, then run my fingers across the layers of paper scraps and Post-its. There's so much here. Jokes, secrets, stories, the slow unfolding of two people whose lives have been changing in parallel―or, I don't know, in sync. Different time, same place.

There are just countless moments such as this one. Tiffy and Leon are both isolated in their own ways. Leon in the much more traditional sense, in that he struggles to relate to people on a near constant basis, even finding his relationship with his girlfriend to be far more tepid than he believed it to be. His life has never been easy, and his strongest loyalties lie with his brother Richie, who was wrongfully incarcerated and who Leon works tirelessly to have exonerated and released. He is also a devoted and eminently capable palliative care nurse. Tiffy, on the other hand, is quite bubbly and accessible. She has a small group of close-knit and genuine friends and works as an editor for an arts and crafts DIY publisher. She thrives on connection and is immediately intrigued by her reclusive and elusive flatmate. Where Leon is a sedate slate, Tiffy is all the colors of the rainbow. And I just loved how helplessly Leon was drawn to the color and life (and delicious food) she brought into his life. O'Leary's pacing in this utterly delightful novel is note perfect. The way that she carefully leads her characters (and the reader) up to the inevitable meeting and through its myriad fallout is both thrilling and enchanting. As Oscar Wilde put it, "This suspense is terrible. I hope it will last." That is The Flatshare, terrible, wonderful suspense centered on a pair of such kind, empathetic characters in a perfectly irresistible scenario. I laughed so often and so happily. I recommend this debut unreservedly and eagerly await O'Leary's next novel.


This is the bit where we turn on the telly and a nuclear war has started," I say, twisting to lie down next to him.

He smiles. "I don't think so. Doesn't work that way. Sometimes the happy thing just happens.