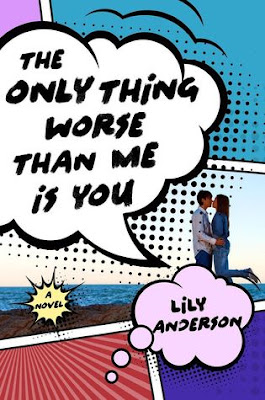 I have now read two retellings of Much Ado About Nothing (possibly my very favorite Shakespeare play, which is saying something), and I'm just sort of delighted with the whole situation. You know how strongly I felt about McKelle George's incredible Speak Easy, Speak Love. That book is perfection from start to finish, and I will die on that hill. Then this year I ran across Lily Anderson's The Only Thing Worse Than Me is You, which just by the way became my favorite book title in forever and just so, so perfect for Beatrice and Benedick and their mad, wonderful war. This was my first book by Lily Anderson, and from the snort of laughter I let out at the opening lines, I knew that we would be getting on just fine:

Hovering over his upper lip―possibly glued there―was a bushy monstrosity that shouted, "Look out, senior class, I'm gonna tie some chicks to the train tracks and then go on safari with my good friend Teddy Roosevelt. Bully!"

Trixie Watson and Ben West have been at odds since time immemorial. They both attend Messina Academy—the same elite private school for nerd geniuses (though neither fits in quite as seamlessly as first appearances might indicate). They both hang with genuinely good, sunny personalities distinctly at odds with their own prickly natures. They both love comic books and all things Dr. Who with an unholy passion. And they are both bound and determined to knock the other out of the third place class standing senior year. And things are progressing rather swimmingly in the Watson vs. West department until Trixie's best friend Harper begins dating Ben's best friend Cornell. The whole situation is too treacly and inconvenient for either of them to countenance. But then the unimpeachable Harper is expelled for cheating and Trixie cries foul. The shifting alliances within their two groups are thrown into even more chaos, and somehow Ben finds himself enlisted in helping Trixie get to the bottom of just who framed Harper and why.

I adored Trixie. She felt so much like a kindred spirit, especially in the calm, but often perplexed, ways she views her peers, herself, her various relationships, and what she might want out of life. The drama she allows into her world is carefully allotted and reserved entirely for harassing her nemesis Ben, a decision I wholly approved of. And Ben is such a worthy, quirky opponent. He continually surprises. They both go about their sparring in such an intelligent and methodical manner, it's difficult not to admire the whole intricate tangle and fall for them both page by page. One of my favorite examples of Trixie's musings:


I grabbed two ends of my hair and yanked until I felt the ponytail secure itself to the base of my skull. It was shameful to be dissecting my own appearance. I blamed Cornell Aaron and the way he stared at Harper, as though he'd plucked her out of a claw machine and couldn't believe his luck. I wasn't jealous, exactly. I certainly had no designs on Cornell for myself. He was a nice guy and good-looking, but nothing like the vague idea I had in mind for a male companion.

But that was the problem. Harper only wanted Cornell. Meg only wanted to see what the hype was about without letting her limbic system get the best of her. And I didn't really want anything. Not anything concrete. I didn't want to waste my time. I didn't want someone who wouldn't understand when I reference Tony Stark, Mal Reynolds, and Alexander Hamilton in the same breath―all handsome rogues, obviously. I wanted someone who didn't need me to backtrack and explain everything. Someone who would escort me to midnight showings but never ask me to dress up to attend. Someone who knew that I always, always, always wanted a Slurpee, but especially when it was snowing.

A boyfriend, I concluded, should be like a new best friend. Which didn't help me at all considering I hadn't made a new best friend since I was eight and Meg transferred to Aragon. Even in a world full of people as smart as I was, there weren't that many people I wanted on my team.

She doesn't want to waste her time. Yes. She's just exactly who she is, Trixie. Her head is on straight. Her internal thought processes are honest and organic. And the lovely thing is the entire group of friends (on both sides of  the battle lines) follow suit. They are a distinct pleasure to be with. Harper, Meg, Cornell, Trixie, Ben, their parents (who, happily, play actual roles in their lives). Like the original source material, each character is carefully delineated and integral to the story as a whole. The entire romp is laugh-out-loud funny and pulls at your heartstrings in subtle and sophisticated ways. I was initially somewhat skeptical of how well this story would translate to high school, even one designed for uber-driven prodigies. But Lily Anderson pulls it off winningly and, at the same time, questions the inherent value of such an institution, the pressures it places on these young adults, and the sometimes detrimental ways those pressures manifest in other areas of their lives. I didn't find a single fault with this novel. Every single page was as charming and smart as you could want. I'll close with my favorite (of so many) scenes between Trix and Ben:


So, if you had your license, would this week have gone differently? I've seen the Yahtzee episode of Community. I know alternate time lines are tricky and all."

He laughed. "I would have offered to be your ride. If, in this time line, I was a decent driver who wouldn't possibly maim you. At least I would have gotten to spend more than five seconds with you." A blush crept out of his collar and continued up to his cheeks. "You left so fast, I didn't even get to tell you that you look beautiful. In the alternate time line, I would have monologued about that."

I averted my eyes, my face warming in tandem with his. "I'm wearing makeup. It's performance enhancer for my face."

"I see you every day. It's not the makeup." He reached over tentatively and lifted my chin. His fingers shook, just a little. "Your eyes really are gray, aren't they? I thought they were blue, but they're almost silver."