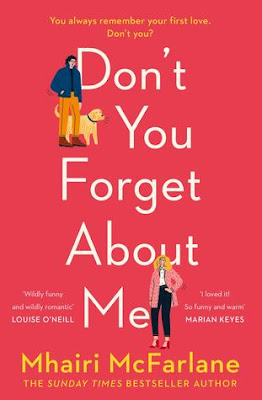 There's really very little to say, isn't there? I hope you are well, wherever you are. I hope that your loved ones are. I hope that you're finding small ways to stay afloat, to remain connected to something, someone, someplace (real or fictional) that sustains you. Dark and difficult times, indeed. I've rather been holding on to this review. I felt so much, so quickly, so irrevocably for this book that it rapidly became hard to talk about to anyone who hadn't read it. And so I hope I can do it justice, just barely enough justice that, if you haven't, you'll run right out and do so. Now is the perfect time. I feel strongly that this book is what you need in your life at this moment. And so. You might want to prepare yourselves. I'm about to wax rhapsodic. But first, and introductory excerpt:


At the end of that session, Fay said, What if it's not what happened with this boy you regret, it's you? It's the you who you left behind. It's who you were at eighteen and the things that happened subsequently, and you look back on it as a watershed. You broke up with yourself.

This hit me as fearsomely true.

I mean, if I was Doctor Who's new companion, and he was agitatedly racing around the Tardis, throwing levers on the control panel, the noise like bellows starting as the time machine mechanism booted up and saying, "Where to, Georgina Horspool?" I'd waste no time in identifying early evening in a crap pub in northern England in the early twenty-first century.

A blond-haired girl in a red dress from Dorothy Perkins and uncomfortable shoes is unsteadily making her way there.

For the time being, she has no experience of managing chronic pain.

Georgina Horspool's life hasn't gone the way she thought it would. She had things well in hand. She fit in wherever she needed or wanted to be. She could charm anyone. She had the wit and enough looks and ambition to make it. And she had, secretly and most importantly, Lucas McCarthy. Assigned to be partners in their senior English class, the bright and bubbly popular girl and the quiet loner Irish transplant boy fell in love quietly and without anyone noticing. And they kept it that way, neither of them sure what would happen to their bond if it found its way into the harsh light of the public sphere. And then graduation night. And all their plans. And the moment when it all fell apart, as quietly and inexplicably as it began. Now thirty and fired from the last in a string of spectacularly dead end jobs, Georgina stumbles home to find her boyfriend has been cheating on her. Unable to bear the disappointment on her sister's and mother's faces, she jumps at the first job offer that comes her way. Serving as a barmaid at the new pub in town, Georgina's walls close in on her further when she realizes the pub is co-owned by two brothers. The McCarthy brothers. And to make matters worse, Lucas does not recognize her. Grown up and as devastatingly himself as she remembers, Lucas McCarthy has no idea that his new employee was the girl he once loved. And the pain, the uncertainty, of not knowing, of not being known is somehow the most anguish Georgina has been forced to feel in twelve long years.


Lucas McCarthy. An unknown, who kept to himself, like all future murderers. Not social contagion, but not who I would've chosen.

He was lean, with a pointed chin; it gave him a slightly underfed look. He was Irish, signaled by the scruffy-short tar-black hair and pale skin. Some wags called him Gerry Adams, but not to his face because apparently his older brother was tough as nails.

Lucas was looking up at me, warily, with dark, serious eyes. I was taken aback by how easily I could read his startled apprehension. Would I make any disgust toward him humiliatingly public? Was this going to be harrowing? Did he need to brace?

Mhairi McFarlane opens with her two protagonists in high school, and I admit I felt a frisson of fear that we might spend too long in the past. But fear is not an emotion you need worry about with this incredible novel. Every storytelling decision is just right. I mean, perfectly crafted. The reader gets the exact glimpse she needs of the past before plunging into the present alongside Georgina. And from then on, it's the most wonderful, agonizing ride. I admire the hell out of Georgina. She is fierce and loud and trying so hard. She has so many reasons to be hurt and afraid and wary, and she simply presses forward. Which is not to say that all the things she does not say aren't taking a toll. And that toll, along with the sudden appearance and apparently now constant presence of Lucas, make up the meat of this story. The thing is, I wasn't prepared. The absolute punch of this book took my breath away. The punch that simultaneously smacked of joy, heartbreak, rage, hilarity, and strength. I found myself barely halfway through and afraid that this book that already held all of my heart might be running under the radar, that its charming cover and lighthearted title might somehow slip by so many readers who needed it. Because it is endlessly charming and frequently lighthearted (she is so, so witty), but there is also so much depth and weight to it. Such an astoundingly slow burn of a romance. And most importantly of all, such a vital treatment of one woman's life (and at the same time all women's lives) in this world that we live in and the ways in which those lives can be forcefully shaped by it and the men in it and how we respond. How we fight to shape ourselves. I wanted to punch something as I read it, wanted to let fly my own punch of joy, heartbreak, rage, hilarity, and strength. That is the kind of weight Mhairi McFarlane is just casually throwing around like it's nothing, when in fact it is everything. Don't You Forget About Me is the best book I've read this year. And, friends, it's not even a close call. It made me feel more than I thought I could, it has one of the most perfect declarations I have ever read (I kid you not, you will not be able to contain your feels), and it's important. It's just . . . important. I'll be giving copies to everyone. A favorite of countless favorite lines:


I'm not carrying it anymore. I spoke the words aloud, used my words, and broke the curse.