April 20, 2020
Since I thought I'd start with the two most egregious reviewing gaps, you get Wayward Son next. I hope this is agreeable to all and sundry. And let's just agree not to pull any punches, shall we? I'll start by admitting that this book wrecked my life. To be clear, I am not complaining. It's just that it had been a long time, yeah? A long time since Carry On came out. Just such a very long time since I'd been in the company of these two. And their crew. And I thought I was ready. Don't I always? Must remember to learn from past mistakes. But more than that, I wasn't thinking about the fact that of course Rainbow Rowell would create nothing less than the sequel that would naturally follow the events at the end of Carry On. Which is to say a sequel that would hurt. Because everything about what happened to Simon Snow from the beginning of his life to his graduation from Watford was designed to damage. With the shining exceptions of Penny and Baz. And so the bulk of Wayward Son is composed of one wild American road trip adventure born of Baz and Penny's increasingly desperate and ongoing attempts to revive their friend before he disappears completely. 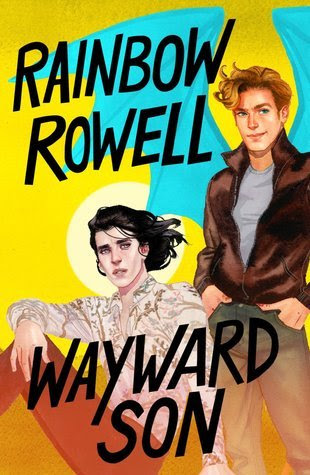 Simon Snow has given up. Or at least, he's absolutely determined to. It's just that Baz doesn't seem to want to let him. Baz. Who deserves so much more than the erstwhile Chosen One, now couchbound lackluster layabout. Simon is determined to do the right thing by his vampire boyfriend. If there's one thing he knows how to do, it's the right thing. So he'll cut Baz loose. If only Penny didn't go and muck up his plans by proposing that post-graduation trip to America she and Simon always said they'd take. Well, here they are: alive and well (in Penny's case, at least) and there is absolutely no reason they shouldn't cross an ocean, take to the open road, and see where the wind takes them. And so Simon gives in, a course that is proving all too easy these days, and the three of them head to America. And if they run into their old chum Agatha and Penny's longtime boyfriend Micah along the way, so much the better. What they don't plan on is just how vast America actually is. Well, that and the fact that it seems to be home to as many monsters in the night as back home in England. Who knew?

Sometimes Simon kisses me like it's the end of the world, and I worry he might believe that it is.

How could he not? From the very beginning Simon was specifically engineered to face the end of the world. Now that life as they knew it has ended, there is no particle of Simon that knows what to do with himself. I have some experience with depression, and I was—well, slightly blown away at Rowell's painfully compassionate depiction of Simon's depression. The way that she alternates points of view—just as she did in the first book—enhances this multilayered approach as we are allowed to witness the ways in which Baz and Penny experience Simon's struggle. None of them know what to do, and it is staggeringly hard to watch them try and fail and try again and battle against losing hope. But the setting? The three of them coasting down the highway in their rented '68 Mustang (Tahoe Turquoise). Baz teaching Simon how to drive. Penny heckling the slowly unraveling Baz from the back seat. Their inadvertent and hilarious appearance at a Midwest Renaissance Faire. The setting provides such organic and spontaneous moments of ease and helpless delight that it goes a small way toward relieving the ever-present spirit of despair and uncertainty. I welcomed those moments as I did the introduction of Shepherd, a Normal who encounters the crew and inserts himself into their developing quest to find the troubled Agatha and fend off the enemy they didn't know existed.

This is my favorite passage (of so many) from the book. And of course it's from Baz's point of view. If you love Baz as I do, beware. Beyond this place, there be dragons. All Baz wants is for Simon to be okay. And he is so careful in this book. He so carefully tries not to take a wrong step, not to make a wrong move and trigger Simon in a way that might prove irrevocable. With his mother's scarf and his flowered suit, Baz is every inch himself. This is a middle novel. The second in the trilogy. And we all know how that goes. There's complexity and pain, blood and unresolved wanting. And every bit of it hurts and left indelible prints on my weary heart. But it's worth it.

Go ahead and shoot me. This isn't my favourite shirt.

Because Rainbow Rowell knows where I live. And that is a Baz made of fury, issuing iconic lines like this one with not one single thing in this world to lose. Wayward Son leaves you dangling off the edge, and it took me honestly weeks to recover. I may have found myself driving aimlessly around town blasting the book playlist and just trying to cope with the emotional fallout. I may have had to reread it immediately after just to process my feelings. This all sounds overwhelming, and it was. But, my, how I loved it. For being brave. And true to its characters and their arcs. I always admire Rainbow Rowell's storytelling, and I can't wait for the conclusion to the tale. My feelings for Simon & Baz are America-wide. I know it will end in flames. But I can see them coming through them. I can see it. So mote it be.

"The homes are so far apart," Snow says. Now that we're off the motorway, we can hear each other speak again. "It seems a bit greedy, doesn't it? Just to take up as much space as you can?"
"They're not that far apart," I say.
"Not to you; you grew up in a mansion."
"I grew up at the top of a tower," I say. "With you."