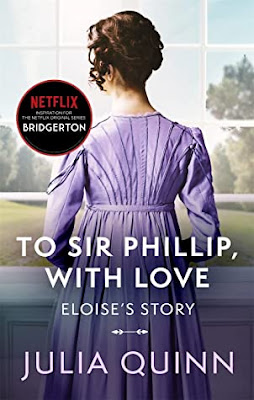 The first book to make it onto my best books I've read so far this year list was actually a surprise. Thanks to Bridgerton's massive success, Julia Quinn's name is everywhere these days. And I'm chuffed about the whole thing. That said, my Quinn reading up to this point has been sporadic at best. And I'd only read two novels in the actual Bridgerton series. So I decided to rectify that at the beginning of the year by starting with Eloise's story (the fifth in the series) because she is my uncontested favorite of the siblings. I had no idea what her story held, but I knew she would be a compelling lead. I also love the title and the role that letters play in the story.
Eloise Bridgerton is tired of everything. She is tired of the endless inane whirl of life among the ton. She is tired of being paraded around and forced to dance and converse with all the wrong men. But most of all she is tired of being suddenly and unexpectedly alone after her best friend Penelope up and marries Eloise's brother Colin. And so when she receives a letter from a man she scarcely knows, she responds without thinking much of it. Thus begins a correspondence that alternately entertains and intrigues both parties. Which is why when the mysterious Sir Phillip writes to invite her to visit his home with the specific goal of seeing if they might suit, Eloise throws caution to the wind and dashes off for the countryside in the middle of the night.

From her window she could see Sir Phillip's greenhouse. She assumed that was where he was, since she hadn't heard him here in the house, stomping about and bellowing at his children. The glass was fogged up and the only thing she could see was a blurry curtain of green—his beloved plants, she supposed. What sort of man was he, that he preferred plants to people? Certainly not anyone who appreciated a fine conversation.

She felt her shoulders sag. Eloise had spent half her life in search of a fine conversation.

Ah, Eloise. I know the feeling. Her spirit and vivacity are my favorite sort, and she is so deserving of a proper adventure. At first somewhat dismaying glance, Sir Phillip does not appear quite the dashing fellow Eloise hoped might await her. It turns out he is a widower with two difficult children. He knows very little of how to be a good father (or a father of any sort), preferring to spend his time working in his greenhouse. And Eloise finds it difficult to find the man who wrote such funny and absorbing letters buried somewhere within the man whose foremost priority seems to be securing a mother for his hellion children so that he may continue his quiet life of solitude and greenery. Happily, Eloise is having none of that. And Phillip finds himself roped into not only participating in his life once more, but talking to the young lady who in turn is not remotely the kind of woman he expected.
There is such a great deal of beauty and depth to this tale. It felt more serious to me than the others in the series, partially because it takes place almost exclusively outside London. And partially because Phillip's history is such a tragic one. And while he makes several dunderheaded moves with regards to his motivations for inviting Eloise to his estate (and while he is decidedly better with the written word than the spoken and with plants than people), I was so proud of him for trying. For reaching out in the first place after life had dealt him such blows. For wanting more for his children than he was currently able to give them. And more for himself (though he cannot even acknowledge it). I found it impossible not to love Phillip. Blind spots and all. Fortunately for him, the woman he wrote was Eloise Bridgerton. Because she frankly carries the day from the very first page. Eloise could talk from sunup to sundown and still not have enough time to express all of the feelings and curiosity and desires of her heart. She is witty and perspicacious and her heart is big enough and strong enough for all of them. It leads her to the right place before she even comprehends why. It falls in love with Phillip and his neglected children and refuses to leave them alone and hurt any longer despite the very real danger her presence at his home places her in. It isn't an easy process, nor is it a painless one. And more than once, the whole thing goes pear-shaped. But it is so touching, infused with so much longing and genuine emotion. It is also, at times, hilarious. Especially when Eloise's raft of brothers make an appearance in peak Bridgerton style. But of the entire lot, Eloise and Phillip are my favorite. They feel like the truest, if initially unlikely, match. A favorite exchange:

And then she told him everything. All about the marriage proposals she'd received, and the ones Penelope hadn't, and the plans they'd jokingly made to grow old and spinsterish together. And she told him how guilty she'd felt when Penelope and Colin had married, and she couldn't stop thinking about herself and how alone she was.

And then, when she was done (and, in truth, she didn't even realize she'd finished; she just kind of ran out of energy and dwindled off into silence), he reached out and took her hand.

And it was, she realized. It actually was.

I'm so pleased to have started off the new year with them. I went on to binge the entire series (Anthony, you rascal, I still believe I will see you in hell), and a fun time was had by all. But To Sir Phillip, With Love will always be my favorite.
Tell Me More
Goodreads | Amazon | B&N | The Book Depository
AAR review