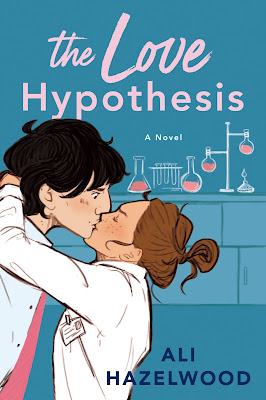 Hi. Hey. Hello there. It's been a . . . well, you know what it's been. We're all still living this together. So I will simply skip to the fact that I couldn't not review this book here. Because reading it was something special. I knew nothing about Ali Hazelwood's debut novel except that it involved women in STEM and that the cover made me smile. I decided to set it aside for myself as a reward. Work has been . . . punishing . . . for the last year, and I have been so exhausted every hour of every day. And so I determined to buy The Love Hypothesis on release day knowing nothing about it. But when I went to the bookstore to get my copy, none were available. In fact, none were available anywhere for love nor money, in store or online. At first I was moderately disappointed. Then I told myself maybe it's not that great after all and I didn't necessarily need to feel this preemptive sense of loss. But it kept gnawing at me. The loss. And so I paused work and read the first chapter online, mostly thinking that it wouldn't grab me as much as I thought it would and I could therefore let go the sense of loss that I wouldn't be able to crawl into bed that night with it. Except, of course, the first chapter utterly grabbed me. I sat there at my computer with a ridiculously dopey grin on my face. So I bit the bullet and did something I virtually never do with unknown quantities. I bought the ebook and ordered a print copy at the same time. As my husband says, every day ends. And come hell or high water, I was going to end this day with something charming.

Are you okay?" He must be really tall. His voice sounded like it came from ten feet above her.
"Sure. Why do you ask?"
"Because you are crying. In my bathroom."
"Oh, I'm not crying. Well, I sort of am, but it's just tears, you know?"
"I do not."
She sighed, slumping against the tiled wall. "It's my contacts. They expired some time ago, and they were never that great to begin with. They messed up my eyes. I've taken them off, but . . . " She shrugged. Hopefully in his direction. "It takes awhile, before they get better."
"You put in expired contacts?" He sounded personally offended.
"Just a little expired."
"What's 'a little'?"
"I don't know. A few years?"
"What?" His consonants were sharp and precise. Crisp. Pleasant.
"Only just a couple, I think."
"Just a couple of years?"
"It's okay. Expiration dates are for the weak.

Olive is considering the possibility that choosing a life in academia was a monumental mistake. On paper it all tracks. She knows why she's pursuing a PhD in biology at Stanford, and her reasons are very personal. Which is fine, because other people have always been somewhat difficult for Olive. She's been on her own for a long time, and while she managed to form two strong friendships with fellow PhD candidates, she always feels most at ease in the lab. Which is why she's so bugged by her current social situation. After weeks of trying and failing to convince her best friend, Anh, that it's okay to date Jeremy, the last guy Olive went out with, she resorts to inventing a fake boyfriend. Honestly, Olive doesn't understand the fuss. Anh and Jeremy would be great together, and Olive wasn't ever that into Jeremy anyway. She's rarely into other people in general. Science is what makes sense. But Anh refuses to hurt Olive, and the ridiculousness of the situation is driving Olive quietly mad. Thus the fake boyfriend is born. Which is bothersome enough in and of itself. But things get suddenly and comprehensively worse when Olive (who is supposed to be on a date with her fictional boyfriend) is hanging out at the lab one night and spots Anh heading her way. Olive panics and does what anyone would do: rush up and kiss the nearest warm body to avoid being caught out in her scheme. And so begins the most tangled, confusing, and oddly exhilarating period of Olive's life. Because the nearest warm body turns out to be none other than Dr. Adam Carlsen, the most intimidating, ruthless professor in the department. Who may actually have a reason or two of his own to participate in Olive's madcap charade.

She was just going to pretend nothing had happened, nod at him politely, and tiptoe her way out of here. Yes, solid plan.
"Did you . . . Did you just kiss me?" He sounded puzzled, and maybe a little out of breath. His lips were full and plump and . . . God. Kissed. There was simply no way Olive could get away with denying what she had just done.
Still, it was worth a try.
"Nope."
Surprisingly, it seemed to work.
"Ah. Okay, then." Carlsen nodded and turned around, looking vaguely disoriented. He took a couple of steps down the hallway, reached the water fountain—maybe where he'd been headed in the first place.
Olive was starting to believe that she might actually be off the hook when he halted and turned back with a skeptical expression.
"Are you sure?

Reader, I am hopelessly charmed. I could not stop grinning for the entirety of the book. I found myself unconsciously bookmarking every single page in my ebook. It has been awhile since a book made my heart feel so light. Olive and Adam are compelling and delightful together, so much so that I had a difficult time wanting to be anywhere but with them. The banter is at once fizzy and deadpan, and it just merrily steamrolls over everything in its way. For two such serious individuals, each new hysterical scenario is an exercise in not running screaming for the hills. But underneath all that, Olive and Adam lock into place with each other in a way neither of them have experienced before. Being the solitary scientists that they are, it remains difficult for them to find and use the words to fit the shape of what's happening. Well, Olive never has a moment's trouble finding words. But the right ones. The ones that aren't so terrifying to utter that you cannot face the prospect. In that arena, she's right there with Adam. The silences that stretch, people. You know I'm a fan. It didn't hurt that I felt such an affinity for Olive's experiences in graduate school as they echoed so many of my own. Not the dating a professor part, fake or otherwise. But the experience of constantly contending with the realities of being a woman in higher education, of being in no way adept at any social aspect of life, and of wrestling with your choices regarding a true and abiding love of academic study and whether or how it will continue to sustain you on an intellectual, financial, and spiritual level for years to come. Layering these achingly real aspects of her life over the headily charming (and very self-aware) fake dating trope made for such a brilliant narrative.

What did Adam's fortune cookie say?"
"Mmm." Olive made a show to look at the strip. "Not much. Just 'Holden Rodrigues, Ph.D., is a loser.'" Malcolm sped up just as Holden flipped her off, making her burst into laughter.
"What does it really say?" Adam asked when they were finally alone.
Olive handed him the crumpled paper and remained silent as he angled it to read it in the lamplight. She wasn't surprised when she saw a muscle jump in his jaw, or when he slid the fortune into the pocket of his jeans. She knew what it said, after all.
You can fall in love: someone will catch you.

My heart is light.