A Month of Reading: August 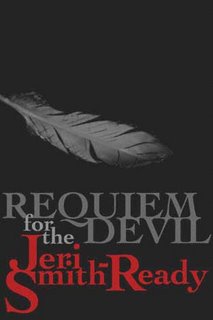 Requiem for the Devil by Jeri Smith-Ready
This one hurt. Of course, I knew it was a sequel to Paradise Lost going in, so I don't really have grounds to complain. It's in turns beautiful, dark, and thoughtful. And I knew how it was going to end from page one. But it still hurt.
Size 12 is Not Fat by Meg Cabot
Okay, I think I've burned my way through all of her adult works currently in print. This one's a mystery and the first written in traditional format. Grab yourself a DoveBar and nestle in.
Just in Case by Meg Rosoff
Proof in print that How I Live Now was no fluke. Holy crow, this book is good. Rosoff's books are always painful, but this one is painful on an existential level. Think The Stranger meets Great Expectations. Keep 'em coming, Ms. Rosoff. Keep 'em coming.
New Moon by Stephenie Meyer
What to say? It was wonderful. It was awful. As good as its predecessor, but Very Different. A word to the wise: if you thought Twilight was in any way painful, you might want to read King Lear a couple times in quick succession before reading this sequel. Let's just say the excruciating level of anxiety caused by that first drop of blood doesn't abate in the slightest to the very last page. Wake me in a year when Eclipse is out. *sob*

Archangel by Sharon Shinn
The first (and best) in the marvelous Samaria series. This was also our discussion book on Readerville this month and Ms. Shinn joined us!
Angel-Seeker by Sharon Shinn
Because even though it's the 5th book in the series, chronologically it takes place right after Archangel, and I'd never read them consecutively. I highly recommend it. Now, you will want to cry when you find that Rachel and Gabriel aren't the main characters. But you must be strong. Keep reading. Because they're there! And the scenes they're in are golden. Plus, lots of Obadiah. Never a bad thing. This one moves up in my estimation with each reread. Archangel will never be ousted from its place atop the Samaria hierarchy, but Angel-Seeker and Angelica are solid follow-ups and not to be missed.
Sword-Dancer, Sword-Singer, Sword-Maker, Sword-Breaker, Sword-Born, and Sword-Sworn by Jennifer Roberson
Ah hoolies, this six-volume swashbuckling series is loads of fun. All six are now out in three fat and juicy omnibus editions, and the cover art is mildly less horrific than the 1980s aerobics-instructors-disguised-as-swordfighters covers of the original editions. Told from the viewpoint of Tiger--the best sword-dancer in the South--as he meets Del--a Northern sword-singer who's not only as good as he is (possibly better), she's a woman. This fantasy series is unusual in many ways, not the least of which is its broad appeal to both sexes.
Beauty by Robin McKinley
Every night at bedtime, Will asks me to tell him the story of Beauty and the Beast. He's seen the movie and he expects certain elements of that version, so currently my telling of it resides somewhere between the movie and this book--my very favorite version of the tale. Of all the fairy tales this is the one where she saves him. Every night I finish the story and Will says excitedly, "Beauty broke the spell, Mommy!" And I smile in the dark and say, "You bet she did."