November 18, 2009
This meme's been floating around for ages now and it's very simple. Compile a list of your top 10 favorite television couples and pass it on. I have to say this was one of the funnest memes I've filled out if just for all the memories it dredged up. I find the breakdown interesting: four sitcoms, four dramas, one supernatural drama, and one science fiction/space western. Hehe. These aren't in order of favorites, but rather in the rough order in which the series came out. 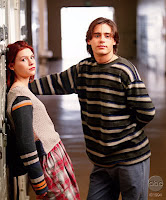 Angela and Jordan
I knew right away these two would be on my list as they've got to be the first TV couple that really captured my attention as a teen. I mean I was just a little younger than Angela when I discovered My So-Called Life. We shared a name, a penchant for slumping, and an intense longing for something--we weren't even sure what it was. Maybe it wasn't really Jordan Catalano after all, but he sure was worth hanging around to find out.

I'm in love. His name is Jordan Catalano. He was let back, twice. Once I almost touched his shoulder in the middle of a pop quiz. He's always closing his eyes like it hurts to look at things. 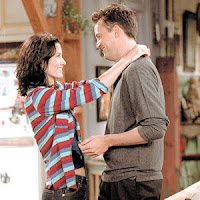 Monica and Chandler
I've always been a fan of the ensemble cast, in books and television, and that's the main reason I loved Friends. Episodes like "The One Where No One's Ready," where they were all six in the same room for the majority of the show were awesome. And I know everyone was all about Ross and Rachel. Together, broken up, on a break, lol! But for me it was all about Monica and Chandler. They were just so cute, such real friends, and they were meant to be together. 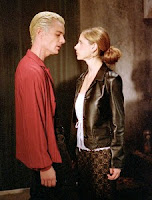 Buffy and Spike
It's hard to describe just how in love I was with Buffy and Spike. They were the first TV couple I was up at night thinking about. Some of that can be attributed to the fact that DH and I watched almost the entire Buffy series while up in the wee hours with baby boy. Watching Spike realize he was in love with his nemesis was like opening a giant present. Sorry, emoAngel. It's all about the Spike.

A hundred plus years, only one thing I've ever been sure of. You. Look at me. I'm not asking you for anything. When I tell you that I love you, it's not because I want you, or 'cause I can't have you, it has nothing to do with me. I love what you are, what you do, how you try . . . I've seen your strength, and your kindness, I've seen the best and the worst of you and I understand with perfect clarity exactly what you are. You are a hell of a woman. You're the one, Buffy.

Josh and Donna
It's to do with the constant bickering and years of tension between these two. Josh Lyman and Donnatella Moss of The West Wing fame hit all of my buttons and they did it just so charmingly. I mean Josh was a dolt--a brilliant dolt--but a dolt, nonetheless, when it came to his loyal assistant Donna and how they were obviously Meant To Be. But it was exquisite watching them circle each other for so long, laugh, tease, and always, always have each other's back. 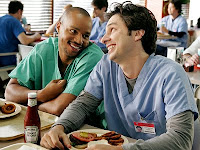 Turk and J.D.
Scrubs never fails to make me laugh. I love Elliot and Carla and Dr. Cox and Janitor. But I laugh the hardest when Turk and J.D. are deep in the throes of their hilariously co-dependent best friendship. These two are incorrigible. Their friendship is as close as any I've seen or experienced and it really made the series for me. These two sappy geeks were without a doubt my favorite "couple" on the show. 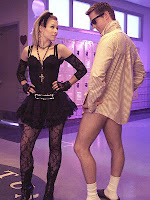 Logan and Veronica
Aaaand right up there with Buffy and Spike for your bad boys and kick-a** girls, we have Logan Echolls and Veronica Mars. Duncan, Leo, and Piz, you were all lovely (well, not so much you, Duncan) and I'm sure you'll make some other girls deliriously happy. But you're no match for Veronica Mars. Three seasons and no one ever compares to Logan. He's volatile and damaged and can take a baseball bat to a cop car like nobody's business. Logan+Veronica4eva.

I thought our story was epic, you know? You and me . . . Spanning years, and continents. Lives ruined and blood shed. Epic. 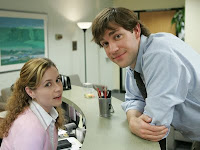 House and Cuddy
Because he's scruffy and cantankerous and she's svelte and so the boss of him. I thought House and Cameron were cute. I hated House and Stacy with a fiery passion. And I waited patiently for House and Cuddy to get down to brass tacks. She's known him the longest and, as his boss, she can tell him where to shove it. And how. I love the flirting and the acrimony and the wit. If House can make a go of it with anyone, it's Cuddy.

Kaylee and Simon
I know when it comes to Firefly, Mal and Inara are the real stars and I wanted them to get together as much as anyone. But I just have this big, mushy soft spot for Kaylee and the Doc. She's the ever-chipper ship's mechanic and just as sweet as they come. He's the always-somber trauma surgeon and is wound as tightly as they come. At first it seems as though they'll never get together, but Kaylee's honesty and kindness loosen him up and win the stuffy doc's heart.

Liz and Jack
And last but not least--my favorite not actually a couple, couple. Both married to their jobs, the relationship between Liz Lemon and Jack Donaghy absolutely makes this show. He's determined to help her get a life. She's determined not to turn into him. I love their scenes together and I secretly never want Liz to actually find someone because it would change the dynamic with Jack and I couldn't bear that.

Jack: Lemon, I'm impressed. You're beginning to think like a businessman.
Liz: Businesswoman.
Jack: I don't think that's a word.

And that's it for me. What about you? Which couples make it onto your list?