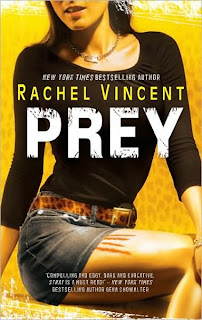 You've got to hand it to Rachel Vincent. She can churn out a page-turner like nobody's business. And, really, with the way she tends to end each novel on a spectacular cliffhanger, I appreciate how close together Mira has released the last two. Installment number five, Shift, is due out in just one month and so I'm particularly glad I waited awhile to read Prey as the end of this one left me even more bereft than the last. A feat I didn't think was actually possible considering the consequences surrounding that ending. I had heard rumors of darkness swirling their way through the internets in regards to this volume and that probably contributed a little bit to my rather unusual willingness to wait as I was afraid of who would be hurt this time and by whom.
Faythe is counting down the hours. Since one of the conditions of her acquittal was Marc's banishment to the neutral territory, she's been on pins and needles worrying about his safety, relying on infrequent telephone calls to reassure her of his continued wellbeing. And when she's not fretting over Marc, she's busy playing nursemaid to the Sanders' newest refugee. Kaci refuses to shift and allow her body to heal and become one with its werecat self. But she worships Faythe and so it's our girl's job to convince the young girl that all won't go to hell in a hand basket if she lets her guard down long enough to shift. There is also the matter of Manx's trial and the political machinations to do with the sudden presence of another rogue female and the role of female werecats in general within the strictly patriarchal werecat community. So when Marc goes missing and packs of strays are seen prowling the neutral territory, Faythe, her brothers, and all her father's enforcers are on a mission to get to the root of these mysteriously linked events.
I'm happy to confirm that the hints of maturation and resolve we saw in Faythe throughout Pride are all present and accounted for in Prey. She's very intent on the important things in this book. She hasn't lost sight of them and she is aware, in a way I don't think she ever has been in the past, of how her actions and her past affect her present and, more importantly, her future. I have always liked Faythe. But I liked her most of all this time around. Better than any of the other characters, in fact, which is saying something as I am kind of a fan of Marc. And Jace, too. But I loved how dogged she was about finding Marc and fulfilling her obligations to her father and Kaci, even to Manx's little son. That said, I would be remiss if I did not note the elephant in the room in Prey. A sense of inescapable doom hangs over this story and I had the distinct feeling that that horrible thing you're afraid will happen the entire time would not actually take place, and then, just when you think it's safe to let out that breath you've been holding, the equally but different horrible thing you're not thinking of would bash you over the head. And I was spot on. When it comes it deals a direct blow and from that moment on things are messy and painful and very, very conflicting. I finished  completely unsure of how I felt, torn over what went down in the end. And nothing is going to help me figure it out but reading Shift and seeing how Ms. Vincent chooses to let the chips fall. I'll just be over here crossing my fingers they don't fall the way I'm afraid they will.
Linkage
Avid Book Reader Review
Good Karma Review
Literary Escapism Review
obsessive-compulsively ruining my nail polish review
SciFiGuy Review