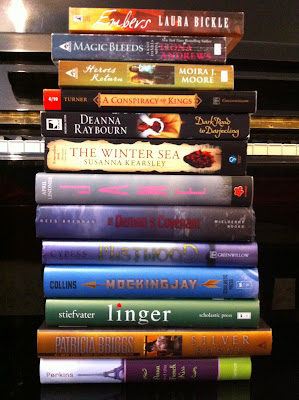 Best of 2010
(in order of publication)
A Conspiracy of Kings by Megan Whalen Turner
Mistwood by Leah Cypess
Some Girls Are by Courtney Summers
The Sky is Everywhere by Jandy Nelson
"Stopping Time" by Melissa Marr
Silver Borne by Patricia Briggs
Embers by Laura Bickle
This Gorgeous Game by Donna Freitas
Linger by Maggie Stiefvater
The Demon's Covenant by Sarah Rees Brennan
Magic Bleeds by Ilona Andrews
Heroes Return by Moira J. Moore
Dark Road to Darjeeling by Deanna Raybourn
Jane by April Lindner
Mockingjay by Suzanne Collins
Anna and the French Kiss by Stephanie Perkins
The Winter Sea

Alan Ryves
*a moment of silence, please, for the one and only Alan--the most adorable armed compulsive liar I've ever met*
Biggest Author Crush of 2010
Ilona Andrews
Ilona and Gordon are awesomesauce and that's all there is to it. I look forward to their fun and funny blog posts and to the occasional delectable treat for their readers, such as tasty snippets or hysterical Kate/Curran twitter convos.


Best Books I Read in 2010, Which Were Published a Different Year