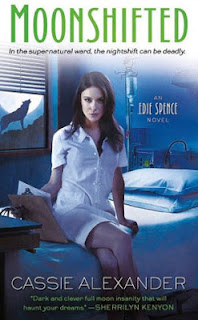 You'll remember my excitement upon discovering Cassie Alexander and Nightshifted--her fabulous urban fantasy debut. I loved everything about it, from the killer cover to the hard-working, conflicted protagonist inside. When I realized the sequel was set to be published just a few months later I was, well, over the moon. Go on. Raise your hands. I know I'm not the only one who waits (with barely concealed ill grace) a year for each new installment in her favorite series. It can be a hard wait. I understand why, and I am nothing if not extremely grateful for everything that goes into the writing and publishing processes. But it can be a hard wait. That's why two in one year? Such a treat. That said, the closing events of Nightshifted were portentous to say the least. And I was pretty anxious about where Edie would be (and in what condition) when I found her next, who would be around to help her, and who . . . would not.

Edie Spence isn't fresh off the shelf on the Y4 ward of her county hospital anymore. She's earned her stripes and is even approaching tenuous friendships with her fellow seasoned nurses. It's been months now since her cringe-worthy induction into life as a nurse for the undead (and every other supernatural creature that comes their way) and Edie is still rattled by the fallout. Indebted to powers she'd really rather not name and struggling to define her unwanted role in local vampire politics, she's less than pleased to find herself holding vigil over a werewolf alpha in a coma. Edie was on the scene when he was attacked and soon  every wolf in the pack is banging down her door looking for clues. This includes a wolf by the name of Lucas who stands to inherit the alpha mantle should the old man not pull through. Lucas is a bundle of contradictions and Edie is 99.9% sure she should keep her distance. But when her home is attacked and the vampires become involved, there is little she can do to stay removed from the action.

Edie is nobody's fool and I love her for that. With the possible exception of her brother, she has very few blind spots. She does her best to avoid disaster scenarios. She really does. Unfortunately, her world has teeth and seems to be supremely uninterested in cutting her a break. That's not to say that she's without her share of foibles. But even when she's making a clear mistake, she remains fully cognizant that it is her choice and that she is making it. Usually to fend off something even darker, for which I can rarely fault her even as it fills me with concern for her and the bleakness that surrounds her. Edie is flawed and lonely and allergic to asking for help for herself and I am incredibly fond of her. Witness a couple of reasons why (taken from my uncorrected ARC):


"I introduced him to my parents, Edie. I thought he was the one."

I didn't know what to say. I didn't think I'd ever felt like that. I'd stood on the edge of The Oneness before, and maybe peeked into the valley below, but I'd never made the final jump. I'd learned that if you thought of people as disposable, it hurt less when they disposed of you.

Her heartrending frankness hits me every time.


Asher met me at the door, looking like the Asher I knew best. Olive skin, dark hair, dark brown eyes. He took one look at me, and then past me at Gina, still slumped over in my passenger seat. "You want to put her in a spare room, or a spare bathroom?"

"Someplace with a lot of tile."

He followed me out to my car, and we retrieved her. Gina kept murmuring things that sounded sad, while Asher helped me help her down his entry hall. We made it up the stairs together, and I arranged her inside a claw-foot tub while Asher went to get extra towels. I sat on the toilet beside her, petting her hair, and Asher returned to lean against the wall.

"Do I want to know what happened?"

"Girl meets were-bear, girl falls for were-bear, were-bear says if you love me you'll let me bite you, girls says good-bye." I wished I had an IV start kit and a banana bag--IV fluids with vitamins and minerals--right about then. We could've set her impending hangover straight in no time.

Asher's eyebrows rose high up his forehead. "I meant at your house."

Alexander graces this novel with the perfect amount of humor and horror. Edie's life is awash in gray. Worn down by her relentless job, her succubus of a brother, and the demands of the paranormal, she's acutely wary of any scraps of happiness that float her way. I understand her caution, especially given how she's been burned in the past. But I can't help but hope for her, too. I enjoyed her interactions with the her fellow nurses (Gina in particular) and the local weres (Lucas in particular) immensely. And her encounters with the elusive Asher fill me with alternating glee and uncertainty. I choose to view these tentative forays as harbingers of the hope she deserves. My concerns and hopes aside, Moonshifted absolutely shone in the sequel department, extending my affection for the characters, while introducing new angles to sink my teeth into. It also possesses one humdinger of a climax. I was swept away in the force with which it built and the raging rush to the finish. I'm more attached to Edie than ever. This is urban fantasy of the highest order. However will I survive the wait for book three?

Moonshifted is due out November 27th.