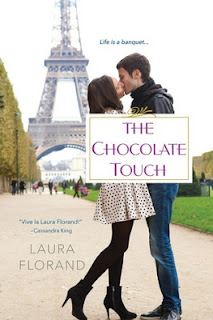 "The time has come," the Walrus said. I am now three (or four, depending on how you slice it) books in and can categorically classify this series as bibliocrack of the highest order. A classification I hope will excuse my reviewing this third installment a touch early. My intentions are pure, I assure you. I just want to make absolutely sure you all know going in that the quality--it remains high. Yes, it does. And so while The Chocolate Touch sadly does not have an adorable silhouette cover in the vein of the first two books in the series, it makes up for it by featuring quite possibly the most overbearing of all overbearing French chocolatiers in Laura Florand's arsenal. Those of you who've read the first two books know what a statement that is. After essentially melting down over the gooey goodness that was The Chocolate Kiss, I narrowly resisted the urge to ransack the state for a good macaron and settled for raising my fangirl flag high and awaiting the next book. I was incredibly fortunate not to have to wait too long.

Dominique Richard has had to claw his way to the top of Paris' exclusive cabal of chocolatiers and patissiers. He's earned his stripes and is wholly unconcerned with the petty complaints of both his detractors and his peers. Quite frankly, he accepts the accolades and attention that come his way as no more than his due. Which is why he's taken somewhat aback at the effect it has on him when a single, unassuming American woman begins stopping by his chocolaterie every day like clockwork. She sits alone and silent at a small table in the corner, sipping his chocolat chaud and sampling the various bon bons and tartes he so carefully crafts. She never says a word. She never misses a day. And Dom is dismayed to realize he's begun looking forward to her daily arrivals, to what she'll order next. Somehow, it is as though she is nourishing herself on his creations. As though, if she could only absorb enough of his decadent chocolate, it will ease the bruised look from her face and clear the ever-present tension from her shoulders. From his view in the kitchen above the salon, Dom just as quietly holds his breath and hopes that it does. And before he realizes it he's sitting down in front of her, offering . . . anything he can. If only she'll stay. Of course, he has no real idea who Jaime is. And she's pretty certain that if when he finds out, the last thing he'll want is to see her face.


Paris was a good place to fight your demons.

I love this quiet observation of Jaime's. She and Dom are certainly well-acquainted with this truth. So often Paris is portrayed in fiction as a place to dream, to eat, and to drown in romance. And it is all of these things here, to be sure. But it is also a place to fight. And I love that about these characters and their story. When we meet them within the first few pages of the book, it becomes clear they're both fighting a whole host of demons. They are also in a place where they are licking their wounds to a degree. Dom's are older and somewhat more insidious in their reach, while Jaime's are so recent as to be breathing down her neck with every step she takes. It's not only the two of them who feel as though meeting the other is a godsend. It feels exactly that way to the reader as well. I could feel Jaime's hands shake as she faced her new life in the wake of disaster. I could taste Dom's frustration each time he was forced to conform to a shape far too confining for the size of his dreams. They were such a lovely match, perhaps even more so because for most of the book no one but the two of them could see it. A favorite passage:


She had to lift both hands to illustrate what she meant, but he just let her carry his hand with her, not about to let go. She pushed the free hand toward the one he held, apparently trying to gesture closeness. "Warm," she said again. And then she did something that undid him to the last faint whisper of his soul: she gave his hand a squeeze with fingertips that could just barely reach around his, apparently using him to indicate what she wanted to say. He meant warmth. He meant this word she couldn't find.

Laura Florand crafts these moments so delicately that they drift down on the reader like so much fairy dust, making your heart throb in time to the beat of her words. In each book in this series, I can pick out that scene, that moment where everything comes together and it's golden. This was that moment in The Chocolate Touch. "He meant that word she couldn't find." Honestly. It's a wonder I got anything at all done in the time I spent with Jaime and Dom and their Paris. Reading The Chocolate Touch was like sampling one of Dom's wild creations, at once intimate and unexpected, leaving you only wanting more.

The Chocolate Touch is due out July 30th.