Review: The Coincidence of Callie & Kayden by Jessica Sorensen 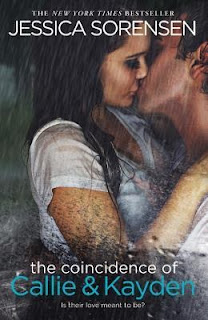 Nothing draws me to a book like a passel of reviews that are all over the board. I literally cannot help myself. Where will I fall on the spectrum? Will my feelings be ferocious or will they dwindle away after leaving the pages and characters behind? The questions, the questions. So it was that I came to download a copy of The Coincidence of Callie & Kayden by Jessica Sorensen awhile back. Pretty kissing in the rain cover aside (I might be a bit of a sucker for those), I had previously stayed away because of the said all over the board-ness. Originally self-published new adult contemporaries are turning into quite the beast of late. Some readers are immediately turned off. Others have enjoyed enough of them to keep their engines running, so to speak. I tend to go on a case by case basis. I've been burned before, but I've also been taken by delightful surprise. This was happily a case of the latter. For those interested, Grand Central picked this one up and will be publishing it in paperback next month (it is already available in ebook), at which time the ebook of the sequel will be released with a paperback edition to follow early next year.

Callie quite simply cannot wait to escape to college. For the last six years, she's avoided contact with pretty much everyone outside of her immediate family. Her older brother is already off at college, coming home occasionally to relive the glory days. And now Callie is just days away from her own sort of freedom in the form of her freshman year at the University of Wyoming, hours away from her unhappy home. Then, just a few months before she's scheduled to leave, she finds herself witness to a scene of violence at her neighbor Kayden Owens' home. Without thinking, Callie rushes in to stop it and, in doing so, forms an unwitting bond between herself and Kayden--a boy she hasn't spoken to since they were in elementary school. Four months later, their paths cross again at school in Laramie. Kayden is there on a football scholarship, while Callie is blissfully flying under-the-radar and crossing one item a week off her list of things to do that scare her. When Kayden literally runs into her, it jogs his memory and he becomes determined to thank the lonely girl who saved him from further beating that night. But, of course, there's a reason Callie fell off the face of the earth all those years ago. And it will take more than gratitude and a growing attraction to overcome the demons lurking in both of their closets.

A word of warning: Trigger issues abound and the whole thing ratchets up to one massive cliffhanger. But I loved it nonetheless. To each her own, of course.


It's a moment I'll remember forever, because it belongs to me.

To be perfectly honest, The Coincidence of Callie & Kayden was everything I was hoping The Sea of Tranquility would be and wasn't. There is plenty of pain and bleak pasts and uncertain futures within its pages, but the pain and bleakness and uncertainty are justified by a fundamental belief in hope and healing that underscores the characters' struggles to survive. There is also a very sweet affection that crops up between them, and not just between the two principals but among their tiny cohort of real friends as well. It's that affection that buoyed me through the story when I found myself confused and afraid along with Callie and Kayden. The writing is simple and unpretentious, the subject matter a sort of dark fluff, if you will. The chapters alternate point of view between the two, each chapter beginning with a numbered item from Callie's list. I appreciated the believably slow way in which she scaled her mountain. And while the romance is most definitely simmering along the entire time, it is never so overwhelming as to force the underlying issues aside. Equal time is spent on both of them, and I appreciated that equality. This is not a story where anyone rides in on a white horse. Instead it is more realistically a story of two individuals meeting and being stretched outside of their own troubles for the sake of the other. I think my overall response was so positive because I never felt like the writing was trying too hard. In other similar books, I have felt so buffeted about by the overwhelmingly present effort that went into it that I was left unable to connect with the characters or lose myself in the story. But Jessica Sorensen isn't trying to sell you something in the guise of something else. She's merely recounting a simple, sad story about two people moving somewhere in the direction of hope, a story I found myself perfectly content to fall for. But I really do need that sequel. Soon.

Linkage
Aestas Book Blog - "This was a quiet yet beautiful read."
Assorted Insanity - "A boring read for me."
The Book Scoop - "I don't even know which words to use to explain how much I enjoyed this book."
Dear Author - "These two have a lot of work to do to make a happy ever after believable, but I’m anxious to read more."
The Fairy Tale Nerd - "THAT kiss in the rain."
Good Books & Good Wine - "I just found her bravery — the real life sort of bravery — very compelling."
Tina's Book Reviews - "I liked the time I spent reading this book, I loved that I saw a path of healing and a coming to grips with the issues."