The Sea of Tranquility by Katja Millay 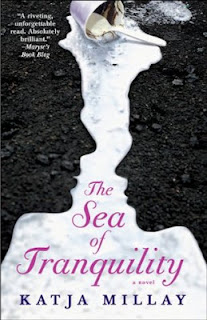 What's that you say? You love a good dissenting opinion? Well, that's works out well. Because here I am. Not thrilled, but certainly prepared, to be the lone voice of dissent on this one. I went ahead and read an ARC of Katja Millay's The Sea of Tranquility after sifting through the seemingly universal ecstatic reviews that have been pouring in from all and sundry. And when I say universal, I mean universal. Readers across the board are going out of their ever loving minds over this book. Yeah. I kind of had to get in on that action, especially when a review copy floated my way. This is Millay's debut novel. She self-published it a couple of months ago, and it has (as has become the way of things) since been acquired by Atria Books for paperback publication this summer. A change of cover went along with the acquisition (as is usually the case), and I have to say I'm likely in the minority on this subject as well. I much prefer the self-pub cover. But as the overall package didn't work for me anyway, that's really neither here nor there.

Nastya doesn't talk. Ever. She's recently moved in with her aunt and is starting school in an unfamiliar environment. And she knows very well how the student body is going to react, not just to her lack of voice but to her unorthodox appearance as well. In fact, she courts it. Ever since . . . what happened to her . . . Nastya has adopted a forbidding public facade. When she's alone, the clothes include colors, the makeup is washed off, and she runs. As if for her very life. And yet a couple of people at her new school attach to her anyway, including uber-lascivious Drew and his best friend (and opposite in almost every way) Josh Bennett. Nastya's not sure why, but Drew seems to view her as his next conquest, while Josh watches her from afar, walking around inside a force field of his own. And, somehow, without even wanting to, Nastya becomes incorporated into their daily and weekly rituals. But it's when she stops in the middle of her nightly run and sees Josh in his garage, laboring away over his woodworking projects, that her routine really changes. Unfortunately, neither of them are quite prepared for how that one alteration in routine is going to overhaul their lives. For two people keeping as many dark secrets as they are, even the most minuscule of human connections could spell disaster.

I feel bad about this, but wow was I expecting more. I went in not knowing anything about this book at all, which was exactly the way I wanted it. But I did expect to be engaged. I expected to want to finish it. Unfortunately, I felt neither. I understand how the setup worked so well for many readers. The secrets, the slow buildup between characters, the angry, angsty girl that so often I adore. It makes sense on paper. But I felt such a distance between myself and these characters, a wall of ice separating me from the agony and the longing they experienced nonstop for close to 500 pages. This separation extended to the characters' talents and passions as well. Nastya's love for the piano, Josh's passion for woodworking, Clay's artistry . . . they were spelled out on the page but never brought to life in my mind. Barring that connection to anything but isolation and pain, I simply could not connect or care what happened to them. Instead of exquisite, slow-building tension, what I felt was a terminally lifeless pace and a drab persistence in skirting actually meaningful moments. The Sea of Tranquility felt like an oddly antiseptic mash-up of Easy and If I Stay/Where She Went, with more of an emphasis on the pain and violence and less of an effort at character depth and growth. I soldiered through to the end, wanting to make sure I didn't miss out on any sudden flashes of light. But the storytelling remained business as usual to the very end, at which point we got a parting line that sort of pushed me over the edge. It seemed to encapsulate every promise this book ever held and never lived up to. It felt like a last-ditch attempt at the sort of emotional manipulation I detest. Too little, far, far too late. As I mentioned, I am not remotely within a stone's throw of the majority of opinions on this book. So grain of salt, mileage may vary, onward and upward, etc.

The Sea of Tranquility is available now in ebook form and will be published in paperback on June 4th.

Linkage
The Allure of Books - "The Sea of Tranquility is on my fave reads OF ALL TIME list."
Dear Author - "It was an emotionally satisfying book in large part due to the ending."
Love is Not a Triangle - "I urge you to pick up The Sea of Tranquility and experience Nastya and Josh's story for yourself."
Reading After Midnight - "A great contemporary romance that will break your heart a bit, but it will be well worth it.