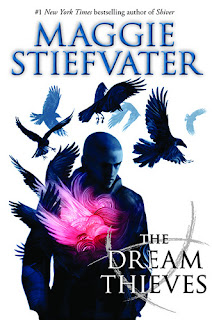 I figured I might as well go ahead and write this review while my stomach is still all twisted and jumpy from finishing it last night and being unable to settle down for hours afterward. Truthfully? I was so caught up I had to go pull my copy of The Raven Boys down off the shelf and reread my favorite bits to help me come down off the high of the second book. Honestly. I'm as bad as Ronan coming out of one of his dreams. Only I don't have a Gansey or a Noah to help harness me back to reality. So. You all will be my Gansey and my Noah, yes? Because I need you after the whirling dervish that was this book had its way with my emotions. It's not that I don't know what I'm getting into when I immerse myself in Maggie's latest book. It's that I'm utterly unable (and entirely uninterested) in distancing myself from these boys and this girl I love. And so when the gloves inevitably come off and the humor eases deceptively into anguish, I am left huddled in a fog of anxiety and murderous affection that lingers for days. Cue all you Ganseys and Noahs out there. Clearly, I could use that grounding right about now.

Ronan has suspected a number of awful things for some time now. And whether he's aware of it or not, he's about to put several of those suspicions to the test. Up close and personal style. After Adam's unexpected and controversial activation of the ley line, things have been thorny between the boys and Blue. Yet the indefatigable Gansey soldiers on. And where Gansey goes, so goes Ronan. Or at least it's always been that way. Ever since Ronan moved into Monmouth Manufacturing and found a cause and a brother worth fighting for. But with the search for Glendower faltering up against the inexplicable whims of the ancient forest of Cabeswater, the onus of the quest shifts to Ronan's tattooed shoulders as he explores his strange new ability to form and snatch things from his dreams, bringing them back whole and perfect to the thick heat of Henrietta and Gansey's discerning eye. And while Ronan is tearing his way through the mists of a dream world he does not understand, Adam Parrish is stumbling along his own dark path. Unclear as to the status of his friendship with Blue and absolutely firm on his refusal to accept any help from Gansey, Adam's isolation increases even as his friends work to keep a hold on him. And underneath it all is Gansey's tireless thirst for the sleeping king and Blue's unchangeable fortune of true love and certain death.


Ronan Lynch lived with every sort of secret.

There is such a beautiful symmetry to this novel. And I don't mean just the lovely prologue and epilogue (though they are lovely and I do mean them). I also mean Ronan's and Adam's parallel journeys that nearly sent me into a state of collapse. I mean the space between Blue and Gansey growing thicker and more choked. And, most of all, I mean the unparalleled words. Maggie's writing always leaves me eyeing the other books on my nightstand askance. I'm afraid they'll peek inside the pages and see what they have to live up to. This time around, these particular words were used to sometimes devastating but always beautiful effect as they drove Ronan, Adam, Gansey, Blue, even Noah to the edge of their capacities. There were many painful and beautiful side effects, not the least of which was one truly spectacular kissing scene (not the one you're thinking of) and (perhaps more importantly) the development of my feelings for Gansey. Heretofore the boy has remained stubbornly distant in my mind, despite his open demeanor and infectious grin. To say nothing of his downright pivotal role in the whole cycle. As Ronan rather astutely notes:


There were many versions of Gansey, but this one had been rare since the introduction of Adam's taming presence. It was also Ronan's favorite. It was the opposite of Gansey's most public face, which was pure control enclosed in a paper-thin wrapper of academia. But this version of Gansey was Gansey the boy. This was the Gansey who bought the Camaro, the Gansey who asked Ronan to teach him to fight, the Gansey who contained every wild spark so that it wouldn't show up in other versions. Was it the shield beneath the lake that had unleashed it? Orla's orange bikini? The bashed-up remains of his rebuilt Henrietta and the fake IDs they'd returned to? Ronan didn't really care. All that mattered was that something had struck the match, and Gansey was burning.

I love this. I love that Gansey is finally burning. But more than that I love that it was Ronan's keen eye that allowed me to finally see Gansey. Because Ronan loves Gansey, I do, too. It was so deliciously dangerous being inside Ronan's head for the duration of this dark, dark book. Of course, this also made his pain mine. I gathered a few of my own suspicions regarding this most jagged of young men and the secrets he lives with. And I really don't know how I'm going to soldier on with these raven boys through all the nebulous, sharp-toothed things I fear are coming. But what I do know is that I will be there with them all at the end. As I remarked to my husband last night and to a friend of mine this morning, The Dream Thieves holds an eye-opening quantity of pain and gut-wrenching tension for just the second book in a quartet. Make no mistake, I am not complaining. But it does give a girl pause. At this rate, I will need the time in between installments to gear up for the second half. But as always in the intervening time, these precious few will never be far from my thoughts. Especially Adam. But then you probably knew that. If you're looking for a story worth living and breathing, The Dream Thieves will take you there.

The Dream Thieves is due out September 17th.

Linkage
Bunbury in the Stacks - "I loved The Dream Thieves unequivocally."
Nori's Closet - "This book is a pure, beautiful coming of age story."