Review: The Luckiest Lady in London by Sherry Thomas 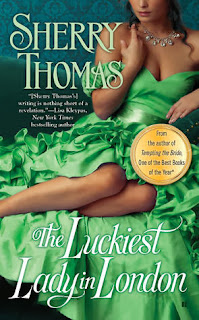 This will be the second year in a row I've started off with a review of a historical romance. What can I say? They are working for me lately, and especially at this time of new beginnings and transitions. I find comfort, laughter, and encouragement within the pages of the best ones. And most recently, that best one was Sherry Thomas' The Luckiest Lady in London. I read and loved Ms. Thomas' YA debut, The Burning Sky, this past year and I'm eagerly awaiting the sequel to that. But I actually read a couple of her historicals prior to that. One worked for me and one not so much, so it was with some anxiety that I picked up her latest historical. One thing I never doubt, though, is the strength of the writing. My, but she has a lovely way with words, to say nothing of a rather comprehensive grasp of the gamut of human emotions. This one was no exception. I fell into Louisa and Felix's story with nary a blink of an eye.

Louisa Cantwell does not trust the Marquess of Wrenworth as far as she can throw him. Known among the ton as The Ideal Gentleman, he is widely considered a paragon of virtue and decorum. But Louisa, despite her desperate need of a wealthy husband, wants nothing to do with this man who acts one way in front of his peers and quite another when the two of them are alone. In fact, they are thrown together on enough occasions that she finds herself actually torn when the inappropriate proposition they've both been afraid he might make actually crosses his lips. It's not that she would ever accept his offer. It's just that a small part of her would like to pretend it was possible, without ruining either of their reputations. But of course it is not possible. He is leading something of a double life and she must secure herself a wealthy husband if she is to support the sisters and mother who rely on her for their continued day-to-day existence. And so the subtle bargaining and not-too-serious flirting goes on until Felix surprises them both by actually proposing, and a marriage neither of them are ready for begins.


"You don't look as righteously vindicated as you ought to," he pointed out, his voice insidiously soft, insidiously close.

"Rest assured my immortal soul is pleased. It's only my vanity that is crushed."

And her pathetic heart.

"My poor, darling Louisa," he murmured, the evil, evil man.

"It is still very ill done of you to come here and single me out, just to tell me you've thought better of your nefarious plans. What am I supposed to tell Lady Balfour in"--she glanced at the clock--"precisely forty-five seconds?"

And once those forty-five seconds flew by, once he walked out Lady Balfour's door, she might not ever see him again. Who else would like her for her scheming ways? Who else would applaud her for thinking of herself? And who else would ask her about the telescope she had loved and lost?

This is one of those heart caught firmly in your throat sorts, in case you were wondering. That seems to be a Sherry Thomas forte, as a matter of fact. I find I feel an alarming amount for her characters very early on. Not so much that it frightens me (this is a known phenomenon), but enough that I am with them for the duration of their troubles. And Louisa and Felix have so very many troubles. Her circumstances and his family history leave much to be desired and, when we first meet them, are in the process of sending out a host of poisonous tentacles to suck the life out of what they've managed to construct for themselves. Their mutual attraction is unexpected and inconvenient on all fronts. And I love how it pains them both. I mean, Felix gets a few proper kicks out of it in the beginning (always at Louisa's expense, of course). But they are both caught by it and well and truly suffering before long. Marriage, which didn't seem to be in the cards, arrives earlier than anyone, including me, expected. But then I got to experience a thrill when I realized this was going to be the story of a marriage. The story of a marriage in which the real courtship and the wounding and the healing would take place after the wedding, not necessarily in that order and not (for better or worse) just once. There were so many complicated and painful factors responsible for the marriage to begin with, that there was fodder galore for an extensive and intimate exploration of all it entailed. And what it entails is quite a lot of fear and longing, knee-jerk coping mechanisms and beautiful-but-brittle facades. It gets worse before it gets better, but the journey is definitely worth it.

"We learned while we were at Mrs. Cornish's ball--guests were leaving to come here and they said you would be in attendance. So Lady Balfour decided to do the same. We didn't even have invitations, but Lady Balfour told me to hold my head high and simply march in."

"And you succeeded admirably, of course."

"I wanted to see you, " she said simply. "And when I came out of the powder room, whom should I spy but you, slipping in here."

"Have you missed me?"

Her left hand closed into a fist. "Of course I have missed you."

And so it goes, in different seasons, and with different degrees of trust and closeness. I was engrossed and very much invested. It is also worth pointing out that the ending works. In many historicals, I find the endings the weakest part. Too fluffy, too abrupt, or in some painful cases, far, far too epilogued. The Luckiest Lady in London succeeds with both its immediate ending and its blessedly brief but just right epilogue. And for that I commend it.

Linkage
Dear Author - "I very much enjoyed the clever structure of this story, and its effective heart-wrenching."
Kindles & Wine - "I can’t believe how much I loved this book!"
Smart Bitches, Trashy Books - "The dialogue is a delight."
Smexy Books - "This one worked on all accounts for me."