Review: Me Since You by Laura Wiess 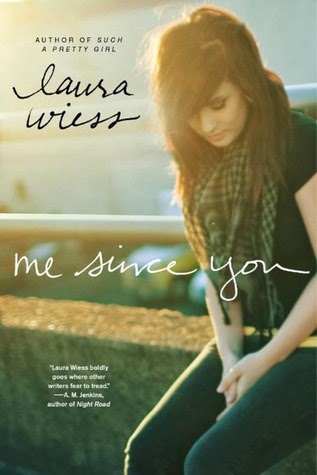 I've decided that Laura Wiess' books scare me. She is not afraid to incorporate the unfortunate and often hellish details of everyday life into her contemporary novels, and I have learned that I have to tread carefully if I am to imbibe, if you will. In fact, I didn't even pick up her last couple of books because I was leery of being hurt. But I was (and am) such a fan of her debut novel, Such a Pretty Girl (despite it's hellish subject matter), that I have been biding my time until I felt ready to pick up another of hers. And when I heard about Me Since You, I decided now was the time. It took me only a few pages in before I felt my mind repeatedly shying away, but I liked Rowan and her parents (and Eli) so much that I kept on reading. I read it all through in a single gulp and have been twitching my shoulders here and there all morning, trying to shake off the heavy feelings it left behind.

Rowan Areno used to worry about cutting class and being caught by her policeman father. She used to worry about what to wear and what to say to boys and whether or not she'd be allowed to spend the night at her best friend Nadia's. Now she mostly worries about her dad. Or rather the empty-faced man who has taken his place, who sits on the couch listlessly when he used to stride about confidently protecting Rowan and her mother, their town, and each of its inhabitants from all bad things. What she never realized was how bad those things were and just how many of them he'd seen in his twenty years on the force. Until the day he failed to save two of those inhabitants and the town (and his own mind) turned against him in the grief and aftermath. Now her mother does all the heavy lifting and Rowan struggles to reconcile the hatred that arises around her, directed toward her father who only ever did his best. At the same time, she strikes up a friendship with a boy named Eli who was there on the bridge with her dad the day tragedy struck, and who himself hasn't recovered from that day or the one before when tragedy uprooted him and left him scrambling to stay afloat. Together they find a bit of hope, a bit of peace. But it isn't long before it all starts to unravel again and Rowan is the one going under.

I don't know, guys. Beyond this point there be pain. I knew that going in. The way in which Wiess narrates Rowan's and her parents' struggle with tragedy, depression, and anger is thoughtful and mature and very real. In fact, it was the lovely family dynamics that held me suspended in their story, the story of this small family of three who love each other and who are utterly blindsided by the disaster that engulfs them. At first, it is Rowan's relationship with her dad that mesmerizes, and then as events progress it evolves somewhat into her reliance on her mother and the ways in which they fail each other but keep trying and promising to go on. I guess what I'm trying to say is I appreciated the dignity and integrity of their portrayal. The same goes for the quiet and sweet friendship that arises between Rowan and Eli. Wiess always handles the element of romance well, and this time is particularly restrained yet open. That said, most of the other characters felt one-note to me, especially Rowan's so-called best friend who acts in consistently insipid and appalling ways and who I struggled to even take seriously by the end. The level of grief and horror in this novel also proved to be nearly my undoing. It reminded me strongly of the feelings I experienced reading Elizabeth Scott's Heartbeat, though I feel like I came out of that one slightly less dissatisfied than I did here. I could always see Emma; she stayed clear in my head. Whereas Rowan's voice got lost for me in the sheer waves of awful that swept off the pages of her story. As such, I began to feel the puppet strings more forcefully than I'd like and the quickly manufactured acceptance and hope at the end failed to lift me out of the despair that held sway the rest of the novel.

Linkage
The Demon Librarian - "I found the book to be engrossing, and I'm glad I read it, but I can tell you it left me hankering for something much, much lighter afterwards."
The Escapist - "People who've had their heart broken, grieved, and let go or in the midst of it will relate a lot in this book."
Fic Fare - "At its simplest, this book is about realizing life isn't always fair and then dealing with all the things that are thrown at you."
That's What She Read - "It is as important a message as one could portray to its teen audience, and one worth remembering for adult readers as well."
YA Midnight Reads - "I adored this book dearly."