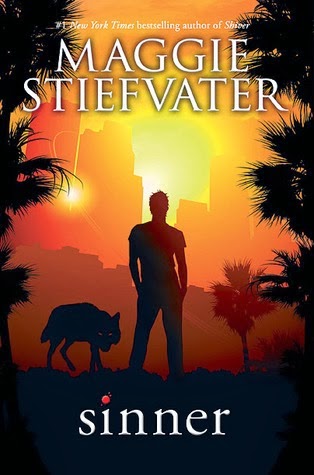 I remember thinking nothing could top Shiver and then being introduced to Cole St. Clair in Linger and realizing Maggie Stiefvater had several more tricks left in her bag. Then Cole and Isabel proceeded to go for each other's throats and I forgot to worry at all. I loved them so much, though, that the continuation of their storyline was perhaps my biggest problem with Forever—the "conclusion" to the "trilogy." The two of them were just left hanging. And because at that point I really felt like Sam and Grace's story was winding down just as Cole and Isabel's was ramping up, I had a hard time with the wide open, barn door left swinging in the wind ending they were given. The funny thing is that I desperately wanted more but really didn't give any thought to the possibility of her writing more. That ship had sailed, we'd all moved on to killer water horses and dead Welsh kings. Which is why when the news hit that there would in fact be a companion novel to the Shiver trilogy and that it would clue us in on what was going down with our favorite emotional assassins, well, that my friends was a good day.

Cole St. Clair is back from the dead and better than ever. He's landed in L.A. and is slated to record his new record as part of a reality webseries with the notorious Baby North—a Hollywood producer known for destroying her subjects as a matter of course. But that's not why he's really in L.A. Not really. Cole is there because that's where Isabel Culpeper is. And in Cole's book, Isabel is pretty much the only thing worth pursuing. If he can revive his music career and make a killer album along the way, so much the better. But Isabel is supremely less than thrilled to see the former NARKOTIKA rocker darken her doorstep. That is to say, it is achingly good to see him. But everything about Cole has spelled nothing but trouble for Isabel, especially his addictive tendencies, be they for drugs, women, or turning into a big, bad wolf whenever the notion (or temperature) takes him. And so begins this epic dance between the two unhappiest people in L.A. Isabel refuses to be drawn into the glitzy hell that is Cole's life, and Cole refuses to be put off his dogged pursuit of the one girl he can be himself with. And as they dance, they're forced to step around Cole's former bandmates (both alive and dead), the new ones Baby North foists upon him, and the last dying gasps of Isabel's parents' marriage. The question is whether the whole cast and crew of the Cole & Isabel show will drag them under or whether they'll find a way to be. Together.


What I had earned was a trophy for generalized disinterest. It felt as if it had taken all of my energy to be so limply disengaged.

As I pulled aside the linen curtain to the back room, I heard the front door open again. If it was Christina returning to make a second effort at my leggings, I was going to be forced to get loud, and I didn't like getting loud.

But it wasn't Christina I heard at the front of the store.

Instead, a very familiar voice said, "No, no, I'm looking for something very particular. Oh, wait, I just saw it."

I gave so many damns at once that it actually hurt.

This is the passage that started me smiling, and I really did not stop until several hours after closing the book. If ever a pair of ruthless protagonists launched a full-scale assault on my emotions, Cole & Isabel are the ones. And just as I was hoping it would be, it was so crazy good to be back in their presence and to just listen to them snipe at each other and put an icily blank (Isabel) or dazzlingly jaded (Cole) face on things. The bright and shameless L.A. setting proved to be such a solid change-up for Stiefvater and the rest of the Wolves of Mercy Falls series. Gone are the freezing temperatures, wooded forests, and quiet ennui of Minnesota. Bring on the baking sun and the sand and the concrete jungle that barely masks too many emotions, too much energy and life being shoved and sculpted into ill-fitting, empty boxes. They are both so strong in this book, Cole & Isabel. The signature alternating POV chapters sing with the distilled and chilled 100-proof vodka that runs in their veins in the place of warm blood. What's more, every side character worked for me, from Isabel's psychotically domestic cousin Sofia to Cole's clear-eyed ex-bass player Jeremy and his hilariously deadpan driver Leon. It was good to be somewhere new with new faces and new threats. The entire paranormal side of this series was notably dialed down in favor of the more human element. Sometimes Cole is a wolf. Sometimes he chooses to become one in lieu of shooting some other form of oblivion up his arm. Sometimes these two facts make Isabel want to murder someone. Preferably him. And that's it. These things are real. But more real, more tantalizing, is the possibility that if they could each just stop killing themselves trying to prove they don't give a damn—just for a minute—they might find a space in which the pain is held at bay. And the hope of that minute, that swoony, devastating minute of peace that could turn into two minutes and then an hour and then a kind of life worth something? That's worth reading.