June 22, 2016
As longtime readers of the blog know, I am a full-fledged Ellen Emerson White fangirl and have been for something going on time immemorial. What this means is that a few years ago, having just finished reading my local library's copy of The Road Home for the second time in as many days, I sat on the couch, brandished the book at my newlywed husband, and told him I was seriously considering never returning it (my conscience did eventually kick in and I meekly returned the library copy—after managing to procure a copy of my own, naturally).

What this means is I went on to purchase an obscene number of out of print copies of the same title (before it was available as an e-book) and proceeded to send them winging their way across the globe to homes where I knew they were needed.

What this means is that I refer to Ms. White's characters by their first names in casual conversation (pretty much on a daily basis) with friends and family members, and they automatically know exactly which Meg, Rebecca, Beverly, and Michael I'm talking about.

What this means is that when I was offered the chance to host the official cover reveal for Ellen's upcoming novel—A Season of Daring Greatly—I was forced to take a moment and compose myself before responding in the unequivocal, if vehement, affirmative.

And so without further ado, feast your eyes on this beauty: 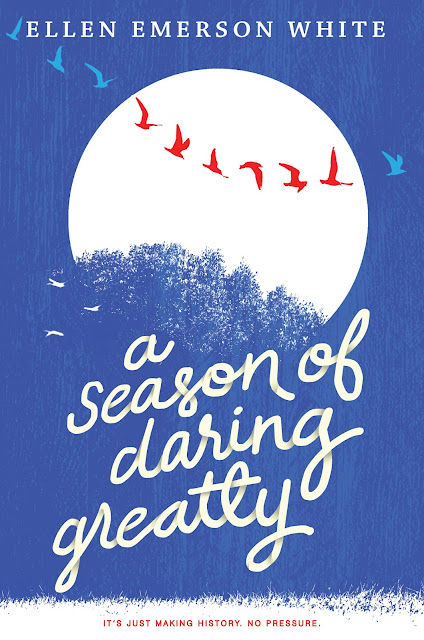 Eighteen-year-old Jill Cafferty just made history. Her high school’s star pitcher, she is now the first woman drafted by a major league baseball team. Only days after her high school graduation, she’ll join the Class A Short Season in the New York-Penn League . . . but not everyone is happy to have her there.

On top of the pressure heaped on every pitcher, Jill must deal with defying conventions and living up to impossible expectations, all while living away from home for the first time. She’ll go head-to-head against those who are determined to keep baseball an all-male sport. Despite the reassurance of coaches and managers alike, a few of her teammates are giving her trouble. The media presence following her at each game is inescapable. And to top it all off, Jill is struggling with the responsibilities of being a national hero and a role model for young women everywhere. How can she be a role model when she’s not even sure she made the right choice for herself? Didn’t baseball used to be fun?

How did the inspiration for A Season of Daring Greatly strike?
I’m not sure I have ever written a main character who wasn’t driven, at some level, by athleticism. I’m an inveterate jock and a big baseball person, so, in retrospect, I’m surprised I didn’t write this book years ago. It would seem to be a perfect blending of vocation, and avocation. But, it turned out to be surprisingly difficult to write—possibly because she is so very tall. It’s subtle, but tall people look at the world differently.  I very much hope that we see women playing professional baseball soon, but I want them to be serious, driven athletes, and not novelty acts.

Your books are often about young women who break the boundaries society tries to set for them. What do you think draws you to writing those kind of young women?
I have never intentionally set out to do that—but, I’m guessing that it is probably engrained in my personality. I revere laws—but, I hate rules, and women inevitably seem to come up against a lot of rules, many of which are unspoken, and all of which are tedious. So, I just ignore them, and my characters seem to share that temperament. It’s fun to write about people doing interesting things.

All of the details of Jill’s life on the team feel so authentic and vivid. Did you spend time with minor league baseball teams while you were writing A Season of Daring Greatly?
The thing about talking about book research is that you run the danger of slipping into a “pay no attention to the woman behind the curtain” area. I have never been a writer who interviews people—ever—and I don’t have anyone read the manuscripts, at any pre-publication stage. (I am barely even comfortable letting my agent and editors read my manuscripts—but, that is purely because of nerves.) My process is very internal, and I go out of my way not to analyze it, or give it too much thought, for fear of getting in my own way—which has always been something I do with astonishing skill and regularity. Unfortunately. I will say that I spend a lot of time around baseball at different levels, and have for many years. I have worked with professional baseball players in several different capacities, and I do a lot of sports photography, professionally and otherwise, particularly baseball and softball. I also coach a male 14U baseball team in East Harlem. (I love my team. No one is ever allowed to say anything bad about my team.)

Jill knows how to pitch, but while the physical demands of being a pro are tough, they’re really nothing compared to the pressure and emotional demands, are they?
She’s also only eighteen, and doesn’t come from a sports-loving family, so that makes her life even more complicated. Baseball is challenging, but trying to learn how to be some version of a normal person, while standing under a very bright spotlight, is even harder. The personality you need to be an elite athlete isn’t necessarily compatible with being a friendly and approachable role model. Jill’s walking on extremely thin ice, all day, every day—and that wears on you, after a while. In many ways, this is a sort of going away to college book—being away from home for the first time, having to learn how to take care of yourself, not knowing anyone, missing your family, and so forth. She has the added pressure of so many people wanting her to fail, and that if she does, it will be in an incredibly public way.

In the words of President Bartlet, “What’s next?”
A sequel, I hope. I think there is still a lot of story left to tell, with these characters, and I’m eager to get back to them. Until I actually write a book, I really have no idea what happens next, and I’m very curious to find out. The President’s Daughter books are out in e-book now, which is fun—since we’re now, finally, looking at the prospect of possibly having a female President.