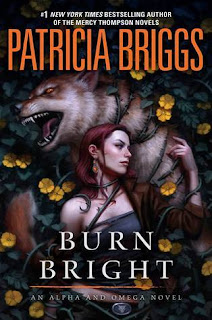 It has been too long since I've had a new Alpha and Omega novel in my hands. Dead Heat was a solid entry on my Best of 2015 list, and I have missed Anna and Charles (and Bran) ever since. Burn Bright is, if you can believe it, the fifth installment in the series. So it's no wonder I began reading and instantly felt how good it was to be back in Aspen Creek again with all of Bran's crazy foundlings. By now, Patricia Briggs' books are firmly comfort reads for me, whether they're brand new or not. They feel like home. Which is probably why the dedication in this one made me tear up. I'm so glad we go on. I'm so glad words go on. And that we are connected to one another through them.

Anna and Charles are somewhat housebound in Aspen Creek since the Marrok up and took off for Africa to see a man about a horse how Sam is doing. And, in his absence, it is Charles the pack looks to for leadership, enforcement, and otherwise keeping things in line until Bran returns. Which is fine. Except it means little time alone and their days spent making sure the various shifting relationships and dominance issues don't get out of hand. But when a distress signal from the mate of one of the outlying wildlings comes in, Anna and Charles are forced to go on the hunt for the mysterious attacker. To say nothing of the fact that Charles is increasingly concerned about the real reason his father left and why he's not responding to any of Charles's calls for help.

Burn Bright is an extremely satisfying installment in the series. I love that it takes place entirely at Aspen Creek, because I am so fascinated by the machinations among that group and thoroughly enjoy being allowed to watch Charles on his home turf and Anna integrating further into her life there. When I realized Bran was going to be MIA for the majority of the novel, I was all set to be properly irritated. Until. Until I realized just how much in the way of insight his absence would bring us, most especially with regards to Leah. The Marrok's mercurial mate has been one of my favorite aspects of both the Mercy Thompson and Alpha and Omega series ever since we initially met her way back in Moon Called. And, even as she was being awful, I just never could buy that there wasn't a darn good reason why she was his mate and that we would eventually become privy to it. Well, we're not all the way there yet, but we do take several steps forward on that front in this volume. Personally, I can hardly stand the wait for more. In the meantime, Anna and Charles make such a good team. They genuinely bring out the best in each other, and their respective individual inner dialogues with regard to caring for and supporting (and affectionately teasing) the other are such a pleasure to read. Real humor, real love. They form the backbone of their arc together. A snippet from one of my favorite conversations:


Charles was kneeling beside the couch. One hand on her face. The other hand was holding . . .

"That," Anna said, "is a really big axe that you didn't have this morning when you left." And it had blood on it. Not his blood, she didn't think. It didn't smell like his blood.

Not ours, agreed Brother Wolf happily.

Charles grunted, then when she raised her eyebrows, he answered her implied question.

"When you contacted me the first time, I'd just stolen the axe from the Viking who attacked me and broke his leg with it."

"It took me awhile to take out his twin brothers, or I'd have gotten back to you sooner."

She considered that statement and decided he wasn't trying to be funny. He looked apologetic.

"I would rather you not get hurt by Viking twins . . . " she had to say it again, "because Viking twins are apparently a thing here."

I always laugh at these classic Briggs exchanges. Like Mercy calmly explaining about the werewolf throwing her against a packing crate while she's trying to rescue the girl from the evil witch and the drug lord, Charles earnestly describing the Viking twins he had to dispatch before he could get to Anna is so endearing it fills me with fondness. For him. For this world. And for the integrity with which Ms. Briggs's sees to it all. As ever, the pacing is note perfect, the stakes high, and the consequences far-reaching. I'm in it for the long haul.