December 31, 2015
I'm amazed that it's actually that time again. The last day of the year. I have my annual list of favorite books of the year. Twenty-three this year, guys. Three more than last year, a couple less than the year before. We seem to be holding steady right around 20 stellar reads a year, which thing maketh me exceedingly happy. 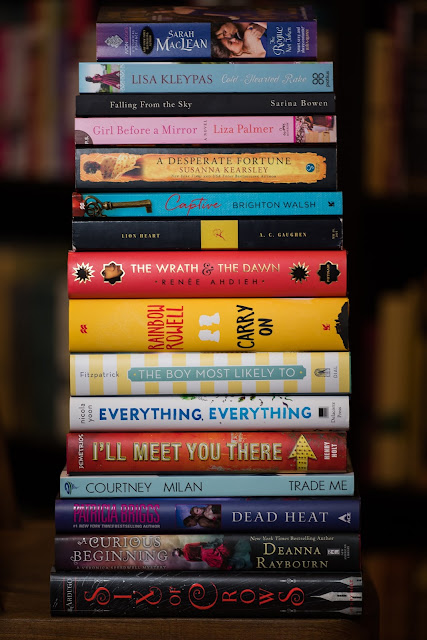 (in the order in which I read them)

True Pretenses by Rose Lerner
Girl Before a Mirror by Liza Palmer
Every Breath by Ellie Marney
I'll Meet You There by Heather Demetrios
Trade Me by Courtney Milan
Falling from the Sky by Sarina Bowen
Pairing Off by Elizabeth Harmon
Every Word by Ellie Marney
Lion Heart by A.C. Gaughen
Party Lines by Emma Barry
Dead Heat by Patricia Briggs
The Wrath & the Dawn by Renee Ahdieh
Captive by Brighton Walsh
Focus on Me by Megan Erickson
The Boy Most Likely To by Huntley Fitzpatrick
Everything, Everything by Nicola Yoon
A Curious Beginning by Deanna Raybourn
Carry On by Rainbow Rowell
Six of Crows by Leigh Bardugo
Cold-Hearted Rake by Lisa Kleypas
A Desperate Fortune by Susanna Kearsley
Act Like It by Lucy Parker
The Rogue Not Taken by Sarah MacLean

Ellie Marney came roaring onto the YA scene with her spectacularly entertaining contemporary teen Sherlock Holmes trilogy. They've been taking their time making their way over to the U.S. from Australia, and I may have ordered more than one from Oz bookshops because I am just that impatient a reader. But they're worth it and then some. Favorite new discovery of the year, hands down.

Like Kaz himself, I don't need a reason. I have a couple or hundred, of course. But I don't need any. This thief, you guys. This particular thief. This close-lipped, leather-gloved, cane-wielding dark genius. He's going to be the death of me in next year's sequel to Six of Crows. I can feel it.

It only came out this year, and I still managed to fit in three reads since. Palmer appears to outdo herself with each book she writes. I'm a little agog at what she'll produce next. But it wouldn't matter what it was, because Anna Wyatt (and Lincoln Mallory . . . I mean) are clearly going to last me a long time.