Review | How to Marry a Werewolf by Gail Carriger 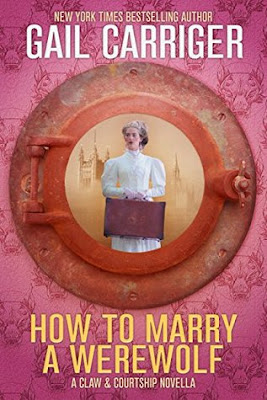 The moral of this story is that it has been far too long since I read a Gail Carriger book. I discovered her back when her debut novel Soulless first came out and thought it was perfectly delightful. I read the next couple of Parasol Protectorate novels and then sort of lost my way a bit. I've always rather wanted to return and, my word, has she been prolific in the intervening years. When I began hearing happy rumblings about this first installment in a new series of novellas set in the same familiar world, it felt like the perfect time to jump back in and test the waters.

Faith Wigglesworth (I know) has been exiled to London and ordered to find herself a werewolf husband posthaste. Her family appears to view such a fate as merely her just desserts for the scandal she caused them back home in Boston. Faith remembers the story a trifle differently. But she is nothing if not relieved to be an ocean away from her less-than-loving family and not at all opposed to a werewolf spouse should the right prospect come along. Enter Major Channing Channing (I know). Head of the Bureau of Unnatural Registry and gamma of the local pack, Channing's years weigh heavy on him and he has little to no use for young debutantes of any sort, let alone the ruined American variety. But Faith is different, with her suitcase full of rocks, her mysterious familiarity with wolves, and her complete and utter lack of fear. Fate (and his very own alpha, Channing suspects) keeps throwing them together and, before long, it's all he can do to remember to be his usual grumpy, off-putting self whenever Faith is in sight.


Faith was enjoying her evening, the looming presence of Major Channing notwithstanding. He seemed to swoop in at odd times, presenting her with a glass of punch or distracting her from her conversation by glowering fiercely. She noticed that if she paid any one gentleman too much attention for too long a time, the major would make himself known. Then he would disappear and ignore her once more.

It was sublimely aggravating. Like being desired by a very large mosquito.

The entirety of this vastly entertaining novella is packed with similarly delightful observations and exchanges. Faith is an immediately sympathetic character. As her history is slowly revealed, my sympathy for her grew. The same is true of Major Channing. Both of these seemingly disparate individuals have suffered greatly, and I so admired their determination to keep going. Every day. Faith is indomitable, and watching Channing struggle to stay away from her lively spark is incredibly amusing and gratifying. I was so grateful the London portion of her family was demonstrably kinder and more protective than her seriously lacking American relations. Her cousin Teddy, in particular, is an absolute gem. As are the scruffy members of Channing's pack, especially Biffy and Lyall, the alpha and beta.


Stop terrorizing the servants, Channing. I don't care how you get yourself out of this twitchy, angry mood you are in, but do it now. I believe I preferred you as a cold, elusive pollock."

Channing grinned. "Now you see why I work so hard for that state. Anything else is worse."

Biffy rolled his eyes. "You could try being happy. Or would that strain something?"

"He doesn't know how." Lyall's voice was sad.

Biffy glared at them both. "Oh, for goodness' sake, he's a werewolf, and he likes to fight. Is it so wrong to suggest he might, oh I don't know, fight for her?

It is such a sweet tale. There is dancing and tea and fancy frocks and quiet longing. And, in the end, they learn to fight for each other. I couldn't ask for more and am so looking forward to the next novella in the Claw & Courtship series.