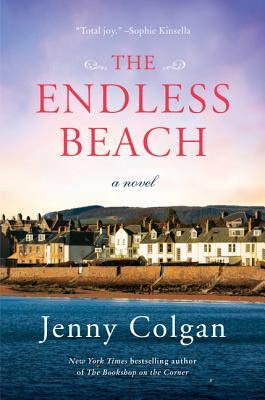 I am almost always up for a sequel. You know this about me. But you also know how there are just some books that are so right a sequel doesn't even enter your head? And it's not necessarily even that things are tied up neatly at the end, it's that the book as a singular entity is . . . whole. On a fundamental level. That is how I felt about The Cafe by the Sea. I finished it completely happy with the world and completely unaware that a sequel was not only in the works, but had already been published just a few short weeks prior. And it's not that I didn't immediately hightail it to the bookstore the moment I found out (because I did), it's that every footstep was laced with fear. Because a sequel meant the potential for a great deal of pain. A sequel meant . . . things could go horribly wrong and, because I loved these characters so very much, I would have to sit by and witness it. But enough about my neuroses. On to the tale!

A word of warning: Beyond this point there be unavoidable spoilers for The Cafe by the Sea.

Flora MacKenzie had no way of seeing this life coming. Nothing in her years in London prepared her for settling permanently back on Mure, for taking up the reins of a real relationship with Joel on that tiny island, for watching her father age and her brothers muddle their way toward happiness and her best friend Lorna die quietly by inches of the kind of unrequited love that only exists in fairy tales. Or so she thought. And yet here she is living and breathing all of those things. And it is a beautiful, terrifyingly fraught existence. One in which this kind of happiness feels at once new and remembered and far, far too breakable to withstand the wild storms of Mure and of Joel's past. And somehow that nascent happiness is the source of both increased drive and self-possession and a mounting fear she cannot shake. As she watches the demands of Joel's work for Colton and the faceless specter of his past silently take up residence in the cozy world they're building together. As the approaching family wedding requires more from all the members of the MacKenzie family than they may be able to give. As the local island doctor Saif, a refugee, faces the agonizing prospect of being reunited with his two young boys without their mother in a land they do not know. It is as though the threads of every island inhabitant's (and transplant's) lives are being interwoven against the always-ethereal backdrop of a series of sightings of a most unusual sea creature.


She had handed him her heart in her hands without truly knowing whether this quiet, enclosed man could be trusted with it. But it had gone; it had flown from her as if it had always been his, regardless of what he wanted to do with it.

First off: this book will always and forever be titled simply The Endless in my head. Because that moment in the first book when Flora, at her wit's end, asks Joel if he'll come walk the Endless with her was the moment the majority of my insides liquefied into a puddle of delight. Most perfect name for a beach ever. Ahem. Secondly, I cannot think of a single way this book could have been better crafted. It succeeds on simply every level. And of course I was right. There was pain. A good deal of it. And not always coming at you from expected corners. But every single moment was organic and earned, was the only logical, possible next step for each of these beloved characters. Jenny Colgan tells this tale the only way it could be (indeed, should be) told. And when an author accomplishes that feat, I am forced to give up all the accolades. I'm forced to conclude that if the reader has a problem with the way Flora and Joel's story (in particular) plays out, then she had no real grasp of who they were, who they really were, as individuals (and as a fledgling couple) before this volume began. I so fiercely admire it when an author takes on the messy details of the real lives of her characters, especially in a second volume, and manages to stays true to every aspect of their arcs as well as the spirit of the first volume. The three central relationships here are so sensitively, so wisely rendered that my small set of hopes became secondary to the unfolding. I was never certain what they would look like on the final page, but I was certain that image would be right. Painful and jagged and beautiful and right.


She didn't look like anyone else Marsha had ever seen, and she lived in New York where eventually you saw everyone, more or less. Her pale hair; her skin was practically albino; those strange silvery blue-green eyes . . . You didn't quite notice her at first glance; she was average . . . then you took a closer look and she was extremely striking. Her voice when she spoke wasn't always easy to understand, but it sounded to Marsha like music. Please, she thought to herself. Let her be kind. But not too kind.

The inclusion of Joel's longtime therapist (and father figure) and his wife, of Flora's trip to New York, of Lorna and Saif's growing bond were all extremely deft, enhancing the emotional depth for both the characters and the reader. To say nothing of the heartbreaking and exquisite treatment of Saif's boys' and their introduction to life on Mure, the father they barely remember, and the traumas of having lived multiple years in a war zone. It was no small challenge pulling off this sequel. But Jenny Colgan accomplishes it beautifully. I'm so happy to have read it, so happy to have Mure―another fixed point on the map of my literary life.