Review | Wicked and the Wallflower by Sarah MacLean 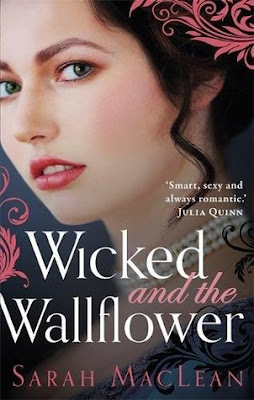 I looked forward to this book with barely restrained delight from the moment I heard the first faint whisperings of its existence. I read it as soon as I could get my hands on it, and then life got in the way (as it is wont to do), and I never quite got around to reviewing it. But I flatly refuse to let the year end without talking about this first book in Sarah MacLean's new series. Just in case you haven't, you know, read it yet. That way you'll have time to fit it in before the second book comes out next July. As I have mentioned before, it was a Sarah MacLean novel that first got me into reading historical romances just a few years ago. And then earlier this year, I had the opportunity to meet her and tell her that, to tell her how much I love her books and just how much finding them meant to me. I hope you all have that chance someday. I've been fortunate enough to meet many of my very favorite authors. And while my facility with language generally flees when I do, they are experiences I treasure just the same.

Lady Felicity Faircloth has been dealt a very unfair blow. Or rather a series of unfair blows in rapid and brutal succession. As a result, she makes a singularly grave error. An error so great and audacious and impulsive, recovering from it may be an impossibility. But. If anyone can help her, it's the man she meets in the dark on the balcony of the Duke of Marwick's home on the heels of yet another humiliating episode. Known only as Devil, he is a king of the London underworld and he is there to remind the lofty duke of his promise. In fact, Devil is prepared to do whatever it takes to keep Marwick from breaking it. And so when he finds out that Felicity has announced to one and all that she is betrothed to the very same duke (even though she is not and has never even met the man), he spies an opportunity. He will teach the so-called wallflower how to actually win her duke and show all of the ton she is worthy of their notice once more, while at the same time ensuring the duke makes good on their years-old pact. What Devil doesn't count on, what he never could have seen coming, is the power of the woman who takes him up on his offer. Before long, she's running him absolutely ragged in pursuit of their mutual goal. From the ballrooms of the upper crust to the dark and twisty streets of his underworld empire, Devil follows Felicity as it becomes more and more difficult to remember why he would want to be anywhere else.

He ignored the question. "Why are you a spinster?" Not that it mattered.

He resisted the urge to smile. "I deserved that."

"My father would tell you to be more specific with your questions."

"Who is your father?"

She was not the least obstinate woman he'd ever met. "I don't have a father."

"Everyone has a father," she said.

"Not one they care to acknowledge," he said with a calm he did not feel. "So we return to the beginning. Why are you a spinster?"

"No one wishes to marry me."

The honest answer came instantly. "I don't―" She stopped, spreading her hands wide, and he would have given his whole fortune to hear the rest, especially once she began anew, ticking reasons off her long, gloved fingers. "On the shelf."

Plain had occurred to him, but she wasn't plain. Not really. In fact, she might be the opposite of plain.

That was absolutely not true.

"I was tossed over by a duke."

Still not the whole truth. "And there's the rub?"

"Quite," she said. "Though it seems unfair, as the duke in question never intended to marry me in the first place."

"He was wildly in love with his wife."

She turned away from him, returning her gaze to the sky. "Not for her.

I love this opening scene so much. That final sighing sentence perfectly illustrates the strength and the compassion that make up Felicity―the dual longing and understanding she feels at the rightness of the husband and wife who found each other again, even though it came at the rather high cost of her own reputation and future. I knew in that moment that I would love both this book and this woman. Because she contains multitudes, does Felicity. That conversation is taken from the very first scene in which Felicity and Devil meet, grounding the reader and the characters so nicely. And the entire book follows delightfully suit, full to bursting with riveting and joyful dialogue, honed to a high and exacting degree. As are the two characters who believe themselves to be in league but who find their goals and desires shifting beneath their feet as they inch closer to what they thought they wanted.

It was a pleasure listening to their internal and external dialogue and following them on their less-than-aboveboard way. Particularly engaging are the scenes set in Devil's world. I felt chills run down my spine with each double tap of his cane on the cobblestones. And it was only a matter of time before Felicity fell in love with his home, even if Devil can't begin to countenance it. Nobody pulls off a match in the truest sense of the term the way MacLean does. And perhaps that is what I love the most of all the things I love so very much about her novels. The women and men she gives life on the page? They are each other's match. And what you can absolutely count on, what you get to look forward to the entire length of their story (or at least the glimpse given within these pages) is that they will see it, too. That they will at some point―likely after a good deal of remonstrating on both sides―know the other for what they are. And make room for them in their lives. Or see that they fit the room that was there waiting.


He watched her for a long time. An eternity. Seconds stretched between them like miles. And then, just when she thought it was all over, he said, quiet and certain, "Here is something true, Felicity Faircloth, wallflower, lockpick, and wonder: there isn't a single thing about you that is flawed.

I closed this book and felt like echoing Felicity: