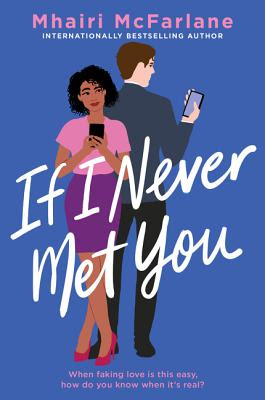 It's been years since I picked up a Mhairi McFarlane novel, and I'm not really sure why that is. I liked It's Not Me, It's You well enough (it's obvious she's quite a witty writer), but something about the execution felt off and I think I let that keep me from diving deeper into her backlist. Then came an offer to review her upcoming title If I Never Met You, and something about this one seemed to call out to me. As though it was time. As though Laurie and Jamie might be the ones. Spoiler alert: It was and they were. It was the perfect read for a couple of dreary, grey January days. While not perhaps as bubbly as I've Got Your Number, I would definitely recommend it to readers who enjoyed that novel. They share a business setting, two individuals who are more than they know themselves to be, and a wonderfully slow burn romance. Readers who love Sarra Manning and Beth O'Leary's The Flatshare should also take note.


Comedy was tragedy plus time, but there'd never be enough time to make this amusing.

Laurie didn't have it easy growing up, but she's made up for childhood uncertainty with nothing but rock solid stability as an adult. She's a successful attorney at a respected firm. She's been with Dan, the love of her life, for eighteen solid years. They own a home together. They're thinking of having a baby soon. Everything is as it should be. And she is happy. Until, of course, her entire life is upended with one nightmare conversation with Dan, leaving Laurie scrambling to keep her head above water and somehow try to piece together how she could have been so mistaken about her life and the people in it. To make matters worse, she has to continue working in the same office as Dan, where everyone can watch the public disintegration of their relationship. Enter Jamie Carter. Jamie also works for the same firm and is widely known as the office Lothario. Roundly loathed by the men and longed for by the women, Jamie cares first and foremost about his job. Specifically making partner within the year. Which is where Laurie comes in. Jamie hatches a plan that should benefit them both in the form of a fake relationship meticulously crafted to make Dan blind with jealousy and the senior partners secure in the knowledge that Jamie has given up sowing his wild oats and is now happily ensconced in a grown up, committed relationship with Laurie. After the company Christmas party is over, they'll part ways. No harm, no foul. On paper, it reads like the perfect plan. In practice, life gets complicated fast.

I finished it this morning, and I still have a delighted grin on my face. While If I Never Met You takes just a minute to suck you in, Laurie is instantly sympathetic. So much so that it's truly painful watching her give voice to her shocking pain and confusion. But it is also so admirable to watch her. Laurie is vulnerable and brave. And while yes, Jamie's proposition is obviously nowhere in the vicinity of the healthiest option in the wake of her train wreck, I couldn't find it in me to fault her for taking him up on it. Not because he's so handsome he stops traffic. But because he is so kind. They are so kind to each other throughout the entire run. And as neither of them is actively trying to hurt anyone (including each other), neither is so naive as to believe this thing is more than it is. Laurie is consistently aware of the potential for pain should she fall for Jamie, and she's not foolish enough to think he will change. Jamie's respect for Laurie grows with each passing day, as he learns how smart and strong she is. It's so gratifying to watch them discover in the other not only someone that they can talk to but a source of friendship and laughter. So much healing laughter in this book for two characters I am vastly fond of. There is both more gravity and complex pain than I was expecting and more quiet affection, genuine laughter, and honesty than I expected. I find myself satisfied on all fronts.


Laurie," he said quietly. Not a question, or an opening to saying anything else. A full sentence in itself.


Please, don't do this. Don't turn one of the best friendships I've had into the shock twist that we sleep with each other for a while, and then fall out when one of us, who, shock twist, will be you, doesn't want to keep doing it anymore. It would turn gold into scrap metal. I don't want to be your millionth fling. This is bigger and better than that.

Lastly, I would be remiss if I did not mention that this novel features two absolutely swoonworthy letters from Jamie. One written to Laurie and one not. One quite pithy and one not. Both heavenly. As Miss Austen knew so well, "Let us never underestimate the power of a well-written letter."

If I Never Met You is due out March 24th.