Magic to the Bone by Devon Monk 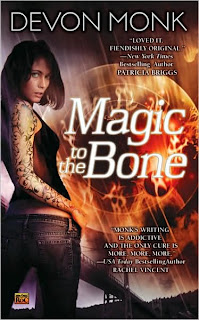 Is it weird that I kind of got a kick out of the main character's name in this book being Allie? It's not my name. I do have a dear friend by that name. But I think the main reason was that I just haven't read a book in a long time that featured an Allie, and it seemed to lend the story a certain appealing freshness. The other names in the book are equally appealing. Zayvion Jones. Violet Beckstrom. And the idea for the story is undoubtedly intriguing.
Magic to the Bone is set in an alternate America in which magic "came out" to the world rather like vampires did in Charlaine Harris's Sookie Stackhouse books. Soon after people become users and consumers of magic, much like they use and consume alcohol. And just like a night of hard drinking, any use of magic leaves the user with a monster hangover. This "hangover" manifests itself in a variety of unsavory ways from intense bruising all over the body to a flu that will lay you low for a week. Allie Beckstrom is a Hound--a person with the ability to follow a cast spell back to the caster. Unlike other Hounds, though, Allie is able to house a small amount of magic within her own body. But this increased ability exacts a higher price. After working a particularly potent bit of magic, Allie frequently loses random portions of her memory. Estranged from her power-hungry father, she lives in a hole, barely scraping enough money together to feed herself with anything resembling regularity. When a small boy is almost killed by a spell that leads back to dear old Dad, Allie immediately goes on the offensive to bring her father to justice. She runs into trouble in the form of Zayvion Jones--a stalker/bodyguard who used to work for her father and seems intent on shadowing Allie's every move.

The whole layout of this story held a lot of promise and I willingly immersed myself in Allie's seamy world, eager to see how she handled her manipulative, possibly murderous father as well as the darkly enigmatic Zay. Allie herself is world-weary in a way that mirrors her world, a place ironically sapped of wonder and goodness by the largely unregulated abuse of "magic." I loved the little book she carries around, recording memories against the day they're stripped from her after overstepping herself magically. In fact, each and every character piqued my interest, from Allie's unusual stepmother to her salt of the earth best friend. However, I found that interest flagging fairly soon as the execution did not quite match up to the idea. Zay's and Allie's relationship seemed rather quickly formed. He felt too good to be true while she seemed to fall into a sort of stereotypical urban fantasy composite heroine. I started to lose my sense for what made her unique and felt that they were both smarter than their actions painted them. The tension between them resolved too abruptly for my taste. Throughout the story, a well-conceived idea here or a particularly cool plot development there managed to revive my flagging attention, but the follow-through lacked the level of tightness and cohesion that is a defining characteristic of my favorite urban fantasy series's.