Retro Friday Review: The Outlaws of Sherwood by Robin McKinley 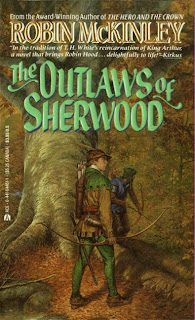 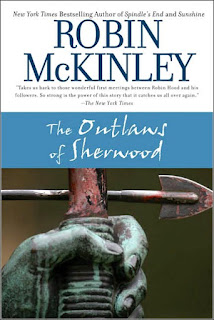 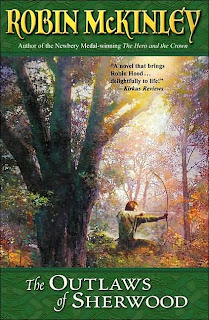 I have a thing for Robin Hood. Specifically Robin Hood retellings. I love Robin, Marian, Little John, Will Scarlet, Much the Miller, Alan-a-Dale, and the whole merry crew. I read Ivanhoe cover to cover just for Robin Hood's periodic appearances. And when I went on study abroad to England, I dragged my best friend all the way to Nottingham and Sherwood Forest as well so I could walk around in the woods and soak it all up. It's still one of the happiest, most golden days I can recall, that one. My first encounter with the tale itself was no doubt the Disney animated version (which I still love watching with my son), but I'm pretty sure the first actual novelization I read was Robin McKinley's The Outlaws of Sherwood. And it remains my very favorite to this day. Admittedly, I seem to possess the McKinley gene. I love her writing. I love the unexpected, twisty paths she takes, the obstinate characters, and the wry humor. True to form, her Robin is not the typical Robin of legend. If you cherish the strapping, dashing, swashbuckling hero a la Errol Flynn, then this version is probably not for you. But if you like an unusual, but beautifully wrought, take on a classic then you really ought to give this one a shot.
The story opens with the following lines:

A small vagrant breeze came from nowhere and barely flicked the feather tips as the arrow sped on its way. It shivered in its flight, and fell, a little off course--just enough that the arrow missed the slender tree it was aimed at, and struck tiredly and low into the bole of another tree, twenty paces beyond the mark.
Robin sighed and dropped his bow.

Robin is on his way to Nottingham Fair to meet his childhood friends Marian and Much and have a bit of well-earned frivolity. As an apprentice forester in the King's Forest, Robin barely scrapes by and his days off are few and far between. Unfortunately, while on his way he is ambushed by a few of the Chief Forester's men who have had it in for Robin for years. No one is more surprised than Robin when he wins the resulting archery contest and the skirmish ends in an attempt on his life and Robin's arrow buried in his attacker's chest. From this point on Robin is a wanted man. His friends convince him to go into hiding while they work up a plan to keep their friend alive and prevent the Norman overlords from raining down punishments on all the Saxons' heads as a result of Robin's "crime." Against his better judgement, Robin goes along with Much and Marian's plan and, in the process, he becomes a hero--albeit a reluctant one.
There is so much good in this book and it all centers around the characters. Either you will fall in love with Robin or you will not. And if you love Robin, then you will love all of the characters for they gather around him despite his adamant refusal that he is no hero because they need him. Marian and Much, his old friends, see this. They understand it and they try to help Robin understand it. Their love for him, their need to believe in him, and their willingness to walk away from their homes and their lives to follow him into hiding in Sherwood Forest reflect the desperate nature of the times and the ways in which this good man is able to inspire and take care of other good men and women like him who have been caught in the ever-tightening vise of Norman justice. I love watching this transformation, this coming together of such a motley band of comrades. Every time I read it I savor each one. And, as with any McKinley book, if you're a fan of strong female characters who do not do what they are expected to do, then this book is for you. Marian is awesome. It's Marian who is the excellent shot. It's Marian who has the vision and who knows Robin's potential before he does. It's Marian who risks more than anyone else to create the legend and keep it alive. There is one other standout female character, but I can't tell you any more than that as she is so excellent she must be discovered entirely on her own. Along with Deerskin, I think this is the most emotional of McKinley's works because it is as grounded in reality as any retelling I've read. The Outlaws of Sherwood is an emotional, subtly humorous, visceral take on the legend and I cannot recommend it highly enough.
Linkage
Bookwyrm Chysalis Review
Fyrefly's Book Blog Review
The Tancave Review