August 14, 2009
Lloyd Alexander is one of a handful of authors who had a hand in forming who I am today. At the beginning of sixth grade my teacher pulled out The Book of Three, the first in Alexander's Chronicles of Prydain, and began reading. He did all the voices, from opinionated Eilonwy to noble Gwydion to humble Gurgi with his poor, tender head. We sat there enchanted as he read the entire five-book series aloud to the class. We were living overseas at the time and, unfortunately, we had limited access to books. When we moved back to the states, we stopped in at the local library and I immediately went to the A section to see if they had any other Alexander books. I was in luck. I picked up Westmark first because of the cover (left below) and because I read the first line and was completely sold.

Theo, by occupation, was a devil.

When the librarian informed me it was the first in a trilogy, I quickly grabbed the other two and made for the door. They were utterly different from the Chronicles of Prydain--darker, and not really fantasy at all, though they are set in a fictional kingdom. Alexander is so well-known for the Chronicles of Prydain and it seems to me this little gem of a trilogy hasn't gotten quite the same reception, though Westmark actually won the National Book Award in 1982. I have re-read them many times since the first time and I love them more with every encounter. 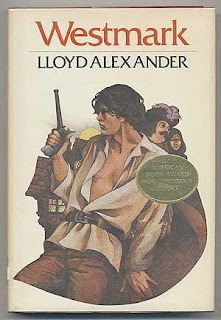 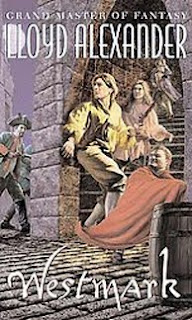 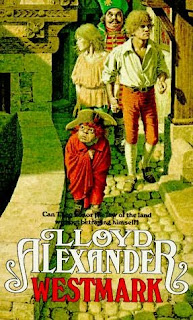 Main character Theo is, in fact, a devil. Though not the kind you might be expecting. Theo is a printer's devil--an apprentice to the printer Anton in the small town of Dorning in the kingdom of Westmark. After printing a pamphlet by Dr. Absalom, Theo and his master are forced to flee into the night as guards break into the printing press and burn the shop to the ground. Ever since Chief Minister Cabbarus took over the running of the kingdom from their grieving king, he has been systematically curtailing the freedoms of the people. On the run from the law, Theo finds himself in league with the mysterious Dr. Absalom, also known as Count Las Bombas, the trusty dwarf Musket, and the bright but haunted girl Mickle--a former pickpocket and street urchin. But when the demands of his conscience prove to much to bear, Theo strikes out on his own and takes a job as scribe for a small group of revolutionaries led by the charismatic Florian. As the story builds to its heart-palpitating climax, these two bands find themselves inexplicably drawn to the capitol city of Marianstat and into the grasping hands of the sinister Cabbarus.
I love how perfectly paced Lloyd Alexander's writing always is. He truly was a master at constructing the ebb and flow necessary to a genuinely riveting storyline, the heights and depths in which to lead his characters, and the clever and crafty words to put in their mouths. His main characters are so far from perfect and they are often painfully aware of it. They want so badly to do the right thing and yet they are constantly faced with how difficult and conflicting a desire that is. Theo is no exception. He is a simple young man hurled into a complex web of secrets and plotting not of his making. The world and conflict is based on the French Revolution and the pain and ambiguity of that conflict is not spared in Alexander's fictional version, particularly in the sequel, The Kestrel, where Theo and his companions are caught up in bloody battle as the nation tears itself apart in the name of freedom. But that trademark humor and overwhelming compassion are still there. Witness this scene:

Florian lifted his own glass. "To the health of one who is ever in our thoughts: our chief minister."
Theo reddened. He was too tired to be polite. He pushed away the glass. "Drink to him yourself. I won't."
"My children!" cried Florian. "Do you hear? This youngster, clearly perishing from hunger, stands nevertheless on his principles. He sets us an example. Put to the same test, would we do as well?" He turned to Theo. "Spoken bravely but carelessly. You haven't the mind of a lawyer, which is a great blessing for you. Otherwise, you would have observed the health was not specified as 'good.' You jumped to a conclusion. In this case, a wrong one. Would you care to reconsider?
"Seize the opportunity," Florian continued. "Don't think we banquet like this every day. We are celebrating the anniversary of Rina's birth." He nodded at the laundress, who rose and made a mocking curtsy. "With us, it is feast or famine, more often the latter."
Theo ventured to ask if they were students. Hoots and whistles followed his question.
"We forgive your unintended offense," Florian said. "No one with a thirst for knowledge goes to the university now. Half the faculty has resigned, the other half gives courses in advanced ignorance. The Royal Grant is no longer very royal nor much granted. Public intelligence, in the view of Cabbarus, is a public nuisance, like a stray cat. If unfed, it will go away. But allow me to present my children, my fledgling eagles waiting impatiently to spread their wings.
"Our worthy Stock, though he may look like a prize bull, is by inclination a poet; by temperament, a dreamer. this one, Justin,"--he pointed to a thin, pale youth, close to Theo's age, with hair so yellow it shone almost white, and with long-lashed eyes of astonishing violet--"Justin has the face of an angel; whereas, in fact, he is a bloodthirsty sort of devil. The result, possibly, of seeing his father hanged. Our two goddesses, the golden Rina and the russet Zara, guide and inspire us.
Florian stood, laid a hand on his bosom, and struck an exaggerated oratorical pose. "As for me, I pursued the study of law until I learned there is only one: the decree of Nature herself that men are brothers; and the only criminals, those who break her statute. Students? Yes. But our classroom is the world."
When his companions, playing audience, finished cheering and pounding the table, Florian went on more quietly.
"And you, youngster? What brings you here? Your trade appears to be professional scarecrow. You may find little call for your services."
Theo's fever was singing lightly in his ears. The food and drink had turned him a little giddy. Florian, on top of that, seemed to have the odd power of drawing him out. Though he kept enough caution to say nothing of Dorning, Theo hardly stopped talking long enough to catch his breath. He gladly unburdened himself, having spoken no more than a dozen words in a dozen days. He detailed his journey with Las Bombas and tried to explain that he had left Mickle for her own good. He finally realized he had been babbling and let his account trail off.
"He loved her," sighed Rina. "It was noble of him. It was beautiful."
"It was stupid," said Zara.
Florian raised a hand. "Children, we are not called upon to render a verdict, only to ponder what should be done."
He spoke apart with the auburn-haired Zara for a moment, and turned back to Theo. "The russet divinity will see you housed for the time being, Master--would you care to tell us your name?"
"It's"--Theo paused, remembering the order for his arrest, and hoping to cover his tracks as best he could--"it's--De Roth."
"Go along with her, then, Master De Roth." Florian grinned. "Here, we feed our stray cats."

It's a beautiful series filled with a host of fine characters (some delightful, some dreadful) who spend their lives wrestling with questions of morality, purpose, and honor, and leavened by roguish wit, high adventure, and a sweet romance. Highly recommended for fans of Megan Whalen Turner's Queen's Thief series. Reading order: Westmark, The Kestrel, and The Beggar Queen.