Radiant Shadows by Melissa Marr, or How I Learned to Stop Worrying and Love the Dark King 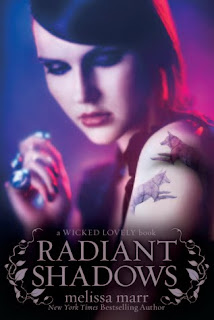 So I've been fairly itching to know where this series would go after the third book--Fragile Eternity--came out last year and utterly realigned my loyalties as far as the faery courts go. Well, that's perhaps not entirely accurate. They were already leaning heavily in that direction after Ink Exchange. But the developments in Fragile Eternity cemented the shift so firmly, I wondered if I would ever recover my early fondness for some characters or if, alternately, anything on God's green earth would be able to uproot my newly acquired devotion to others. Where Fragile Eternity was a more direct sequel to Wicked Lovely, Radiant Shadows is a sequel to Ink Exchange. Given the way I loved Ink Exchange, I, for one, was definitely looking forward to a couple of fresh, new characters, a possible mention of how Leslie was doing, and being back in the Dark Court with less tiresome Keenan and Ash and more magnetic Irial and Niall.

Ani is a halfling. Daughter of the Dark King's chief enforcer and a mortal woman, she sits astride the precarious line between several worlds. Raised among the Hounds, along with her two halfling siblings Rabbit and Tish, Ani comes into her own when she makes a rather unsettling discovery. Like the Dark Court she feeds off emotions, but she is also able to feed from actual contact with both humans and faeries. And it's not just a desire, it's a compulsion. Restricting her impulses, following her father's innumerable rules, Ani is on the brink of wasting away. Only the former Dark King Irial truly understands what she is. He helps her when he can, occasionally allowing her to feed off his own emotions, as he searches for a way to use her powers to benefit their people and keep her alive in the process. Devlin is the High Queen Sorcha's brother and assassin. Known as the Queen's Bloody Hands, it has been his eternal task to negotiate a path betwixt his two sisters--Order and Chaos--and maintain the balance between their opposing powers and purposes. And Devlin has never shirked his duty or fallen short in any way. Except one. When he inexplicably spared a life he was ordered to take. Since then he's stayed away, shoved any treacherous instincts he's had aside, and worked tirelessly on behalf of the High Court. Until one day he encounters the mortal who's life he spared. And all hell breaks loose as a result.

This series is wreaking havoc with my emotions and that is all there is to it. The thing is, I thought Wicked Lovely was wicked fun. I thought Ink Exchange was impossibly dark and achingly good, despite leaving me feeling a little bruised. I found Fragile Eternity problematic in many ways, but was glued to the page for the last third of the book and emerged in deep smit with a couple of Dark Kings who shall so not remain nameless. And I do mean deep smit. My love for Irial and Niall is deep and wide and full of shadows. And, as far as I'm concerned, this book (and any other she writes in this world) is worth the hardcover purchase price just for the few scenes they are in together. I am dead serious, people. I don't know how she did it but Melissa Marr has me wrapped around her little finger when it comes to the former and the current King of Nightmares. Just tell me one or (preferably) both are going to make an appearance and I am there. Their tortuous, touching relationship slays me. And such was the case here. I never really connected with Ani or Devlin, despite the fact that I thought he had some crazy good potential after his role in Fragile Eternity. I mean I love the Gabriel Hounds and their awesome steeds and pack culture. And Bananach--the War faery--is deliciously heinous and I simply love it when she tromps through a scene, bloody feathers and all. But, for some reason, I didn't care that much what happened to Ani. Not like I cared what happened to Ash or Leslie or Seth in the previous three books. And the dream subplot just did not hold my attention at all. Now, I will freely admit the possibility exists that I am actually so far gone on my two Dark Court boys that I have become insensible to the charms of lesser fae. But I'm pretty sure I'm fine with that. As long as I get more Irial and Niall in the next book--Darkest Mercy. Which, as it is also the final book in the series, is going to have to be enough to last for me a very long time indeed.

Radiant Shadows is due out April 20th.