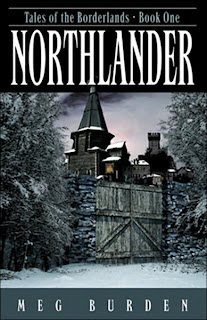 First off I just have to say I want to give Charlotte a great big hug for finally getting me to read this book. It's actually been in my possession for an embarrassing almost two years and it took this round of Tell Me What to Read to kick my butt into gear. I don't know what kept me from it, given that I originally purchased it based on Leila's review over at Bookshelves of Doom. And she never steers me wrong. But I did undergo a pregnancy in between buying Northlander

and reading it and so maybe that had something to do with it. Those pregnancies. They can wreak havoc on your mental state. In any event, I was pleased to see it pop up as the selection for this last month, particularly as I had heard the sequel had been published in the intervening time and I was looking forward to being able to run right out and read the second book if I ended up loving Meg Burden's first Tale of the Borderlands. That's the only good thing about waiting to read the first in a series, isn't it? And I held the knowledge of a sequel out before me like a promise. But more on that later.

Ellin Fisher and her father have come to the Northlands in secret and under pain of death. Her father--a noted Southling healer--has been summoned illegally to work his arts on the Northlands King. The king is dying and none of the leeches they call healers in the North have been able to do anything to ease his pain or stop the rapid decline. And so a few of his highest councilors do the unthinkable and smuggle a hated Southling healer and his red-haired daughter into the royal city as a last resort. Despite the fact that the king has specifically outlawed evil Southling magic and despite the fact that their southern neighbors are looked down upon like the plague. And so Ellin finds herself forced to hide out in a country where she is reviled and watch her father attempt to save the life of a man who would have them both flayed alive if he knew they set foot in his kingdom or dared to lay even a finger on his royal person. Then one freezing night Ellin is out fetching the ingredients her father needs and returns to the city gates only to be turned away on the grounds that she has no papers. And it turns out that the young guard who so acrimoniously shuts her out in the cold is the king's youngest son Garreth. But when Prince Garreth realizes it is Ellin's father who stands the only chance of saving his father and that Ellin herself possesses an unusually gifted talent for healing as well, things become a little more complicated. As Ellin works to reconcile the unfriendly, raw land she's come to with the friendship of Garreth and his older brothers her perspective begins to change and it is only the first in a long line of shocks she will have to endure before she and her father will be allowed to return home. If they aren't killed first.

I fell into step with Meg Burden's writing style from the first page. The easy, fluid writing reminded me a bit of early Tamora Pierce and Patricia McKillip, with a little bit of The Blue Sword

thrown in for good measure. Ellin's relationship with her father is a strong one, even though they occasionally keep things from each other because of their love and desire not to see the other hurt. Her mother's death was hard on them both and it's a difficult and dangerous process allowing yourself to care about more people who might betray you by dying at any time. Which is why the Northlands princes pose a particularly uncomfortable problem for Ellin as it becomes clear that it will be impossible to hate them, with their blond hair and boyish charm and the way they seem to have of including her in their escapades. Even grumpy, dumpy Coll who is only interested in horses and wants Ellin in his home about as much as he wants an incurable disease. And they all clearly love their father, tyrant though he may be, and that is an emotion Ellin can relate to. Here is a scene early on, in which Ellin begins to see the castle and its inhabitants in a slightly different light:


He leads me through the hall Garreth brought me in and then into the castle's great room, where I stop with a quiet gasp and look around. I had thought this place dark and forbidding, but now, with sunlight streaming through the high windows, I realize I was wrong.

The darkness made all the furniture look black and heavy, but now I see that the large tables are deep red, with carved legs and polished to gleaming. The banners and tapestries are richly dyed, scarlet and deep green and dark blue and gold. And they're beautiful, worked with ornate pictures of wolves and horses and snow cats and other Northlands creatures. A fire crackles orange in the huge hearth, keeping the room warm despite its size, and benches and chairs are gathered in front of it, waiting for a storyteller and listeners to pass the cold nights.

Ahead of me, Erik stops and turns. "What's the matter?"

"This place," I say slowly, still dazzled. "It's beautiful."

He looks around, too, and shrugs."This? It's not bad."

I shake my head, realizing that this room has to be larger than the main room at Alder's inn, back home in Harnon. "It's so big. How many people live here?"

"At the castle?" Erik's brows pull together in thought. "Well, there's Da, and us. That's six. Nan and her girls make ten, add the stable boys, Jana the cook, Lord Ivan, Lord Erfold the Wise and his wife, Master Thorvald the Physician, Master Fenrik the Smith and his family . . ." he shrugs. "Twenty-five? Thirty? Alaric would know exactly, and could tell you without blinking an eye," he adds with a grin. "I'm not really sure."

I nod, a little overwhelmed at the idea of living with so many people. "So, do they call you Erik the Uncertain?" I ask, teasing, as we leave the room.

"Because you're as quick to shoot with a bow as you are with your mouth?"

"Not as quick as you," he retorts, half-laughing. "Or as sharp, apparently."

"Well, they call Alaric the Golden."

He nods. "And then Coll Horse Master. Officially, at least," Erik adds with a wicked smile. "Everyone calls him Coll the Fat, though."

"And he doesn't mind?" I ask, trying not to giggle.

"Course not. He is, isn't he?" Erik waves one hand dismissively. "Then there's me; they call Finn--actually Finnlay, by the way--'the Deaf,' of course, and Garreth the Youngest."

"No. But they're always true."

The characters in this book surprise each other. They live in a world of absolutes and yet somehow manage to reach across borders--quite literally--and form friendships where only enmity existed before. That is why I loved them and Northlander

. They succeeded in surprising and endearing themselves to me and all I wanted to do was spend more time with them. Not to mention the enticingly dangled hints at the real history between these two countries and these two families and what it might mean down the road.

And so we come to the subject of the sequel. By all accounts, The King Commands

--the second installment in the Tales of the Borderlands--was published on April 12th of this year. That's right. Just under two months ago. And yet an actual copy of this book is nowhere to be found. Or it's going for more than $50 used on Amazon, which amounts to the same thing for me. What gives? I know some of you out there have read it. So help a girl out. What happened to make this book disappear in so short a time? I'm mystified. I realize Brown Barn Books is a small publisher and so on, but did they only print like ten of them and then, once those were gone, that was it?! Because, if so, then I have a problem on my hands. I need this book. I'm going insane here. I have to find out what happens to Ellin Fisher Healer, to Alaric the Golden, to Finn the Deaf, to Erik Archer, and, of course, Garreth the Youngest. Who can help me? Anyone?