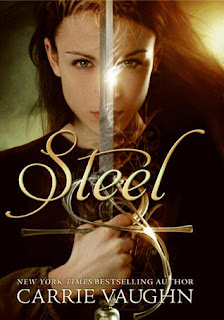 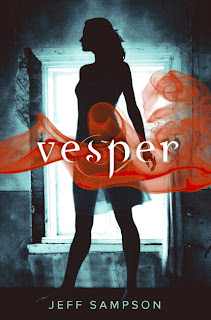 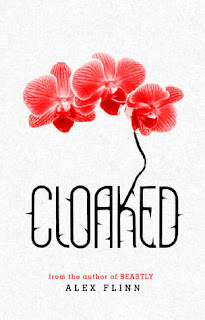 With the fierce stance, the barbed lettering, and the gleaming sword, these three have been calling my name the past few days. It's all about the one-word titles these days and I'm continually amazed that they're able to keep coming up with them. I happen to like all three of these titles. Vesper has been a favorite ever since Lloyd Alexander's wonderful Vesper Holly series and these three look like they'll be a great way to break in 2011.
Vesper

by Jeff Sampson
This cover is truly something special and it sounds like the insides are just as enticing. Subtitled "A Deviants Novel," Vesper

follows an under-the-radar girl named Emily Webb whose sudden and out of character acting out coincides with the mysterious death of a fellow classmate also named Emily. The changes only intensify as Emily struggles to understand what is happening to her. Due out January 25th.
Cloaked

a couple of years ago and I often think of those hilarious fairy tale character chat sessions and laugh to myself over poor BeastNYC, Froggie, SilentGirl, and GrizzlyGuy. So I was pretty excited to see Cloaked

pop up and find it's a retelling of the Frog Prince fairy tale and perhaps it will feature the hapless Froggie! Love how this cover matches the one for Beastly

. Due out February 8th.
Steel

by Carrie Vaughn
Get this. A competitive high school fencer who is magically transported back in time to an 18th century pirate ship. There really aren't enough YA books out there with competitive fencer protagonists, you know? Add in the time travel and you've got yourself a winner, folks. I have Ms. Vaughn's Kitty Norville series on my TBR, but I may just have to pick this one up as soon as it comes out as well. Due out March 15th.