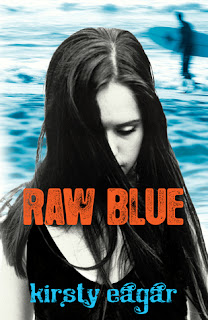 Raw Blue has been skirting the edges of my consciousness for awhile now. I knew it was a debut novel. I knew it was written by an Australian author. And I vaguely knew that it wasn't really available here in the states. But I wasn't really interested until a few days ago, when for some odd reason I started investigating it seriously. I'm not sure what made me do it. All I can say is, I saw a reference to it somewhere and I got a feeling. You know what I mean. So I went on the hunt. As far as the cover goes, well, I'm not wild about it. I like the title font and color just fine. But nothing about the rest of it reels me in and, having read it, this neither looks like how I picture Carly, nor does it really capture the many complexities of what is going on in this novel. But. As I looked into tracking down a copy, I remembered I'd read very positive reviews on several of my favorite sites, and after checking out Kirsty Eagar's site, it quickly became clear that my best (and fastest and cheapest) shot would be downloading the eBook and going from there. So I did. And, wowzers, am I glad!

Carly is 19. She's on her own. She dropped out of university awhile ago for reasons both complicated and painful. She lives in a messy apartment, which she shares with a Dutch woman named Hannah. She works nights as a cook at a somewhat dicey cafe. She avoids answering calls from her disapproving mother. But most of all--Carly surfs. She lives to surf. Eats, sleeps, and breathes the sport. And she has very carefully arranged everything in her life to accommodate that one pursuit in the hopes that she'll be so absorbed in it, she'll never have to think about what happened to her two years ago. And life is . . . well, if not precisely stimulating, it's her life. And as unbelievably private as she is, Carly is comfortable with the way things are. Until she meets Ryan--another avid surfer who starts showing up at Carly's favorite spot. Ryan is older and seems to have a slightly checkered past. But he seems genuinely interested in Carly. He's quiet and not intimidating. He loves the sport she lives for. And gradually she begins to wonder if it might be worth responding to one of his many offers of friendship. If she might be ready, finally, to not be alone anymore. At the same time, Carly runs into a quirky kid named Danny. Danny is fifteen and has synesthesia, which means he sees people as colors. For reasons passing Carly's understanding, this young kid latches onto her, and suddenly Carly has two people trying to be her friend, to claim pieces of her heart.

I loved this book from start to finish. It dropped me into another world, full of surfing lingo and weather reports, charmingly different speech patterns, and the ubiquitous word "mate." I have absolutely no familiarity with surfing whatsoever, but I love reading about characters who are so passionate about what they do. No matter what it is. The surfers in this book are bonded together by their common passion and, as a result, the detailed descriptions of waves and tides and impending storms fascinated me to no end. But even more than surfing, this book is a love story. And it is an exploration of what happens after. How survivors survive. And just how much it takes to move on and reach out to another human being in the aftermath of violence. A favorite passage from early on (I know it's long, but it's worth it):


We're still sitting there when my mobile starts ringing an hour later. I decide to leave it, thinking it must be Emilio.

So I get up and run inside--leaving a phone ringing is the sort of thing that messes with Hannah's mind.

The phone dies as I pick it up and I check the menu for missed calls. It wasn't Emilio who called, it was Ryan.

I wait to see if the message icon comes up, but it doesn't.

What to do? Maybe my board's ready. Maybe he wants Hard Cut back. Maybe curiosity is killing me.

He answers on the first ring, which sort of jolts me.

'Carly, how're you going, mate? Mark's rung to say the boards are done.'

There's a pause long enough to be filled in with static.

'Been getting out much?' he asks.

'Haven't seen you down there for awhile.'

'Um, I've been going different times. Because of work. Different shifts and stuff.'

I make myself say it. 'I'm sorry for being rude to you the other day.'

'And thanks for getting me a board to use.'

'Yeah. Bit harder to duck dive through, and turn.'

'Don't tell Mark that. He fancies himself a gun shaper.'

I laugh.
'So anyway, when you're ready to pick it up they're down in Harbord Road,' he says, sounding like he wants to wind this up. 'You know it? I've forgotten what number, but just drive along slow and you can't miss it.'

'Big Hard Cut sign out the front. I've told Mark if you try and give him money not to take it. He did it as a favour.'

'Yeah, no worries. All right then, catch you later.'

I put the mobile down and rub my face. I feel like my stomach's dropping away. And that's that, then, I think, walking towards the deck. Before I get there my mobile rings again.

'So, it's me again--Ryan.' His voice is different this time, not as brisk.

'So, ah, there's supposed to be a big swell building for the weekend, from the south. They reckon it's going to hit Sydney on Sunday. Biggest swell in twenty years or something. Hear about it?'

'Um, yeah.' Coastalwatch has been going on about nothing else all week, sounding like the voice of doom: If you want to live, do not venture out on Sunday.

'So I'll be down at the break, 'bout eight or so. They'll be towing in for sure. And probably off the Long Reef Bombie, too. Be worth a look if you're interested.'

He stops talking as though he's waiting for something. I'm quiet because I'm not sure if he means I should go with him. I'm not sure what he means at all.

'Okay.' I would like to ask for some clarification, but I don't have the guts.

He hangs up before I can say okay again.

Hannah doesn't look up when I come back outside, and she doesn't ask me who called either. But when I'm sitting down, flexing my feet and pointing them, eyes shut and face raised up to the sun, she says, 'But you're happy, eh?'

I blink at her, surprised. She's right.

My happiness is crunchy. Snapping, crackling and popping in the sun.

I think that passage gives you a feel for Carly and Ryan and the halting way their relationship begins and progresses throughout the novel. I fell for them both immediately. Kirsty Eagar does such a fine job of pacing the story and allowing the reader to really take the time to get to know Carly, her past, and what makes her tick, before introducing new characters and new elements. The result was that I was thoroughly on her side for the long haul. And it should be pointed out that this is not an easy story to read. It is definitely for the more mature reader of YA, as the language, tone, and subject matter are all quite gritty and not for the faint of heart. I, for one, loved it because the characters were a bit older, definitely more in the New Adult region. Carly's out of high school, done a stint at college, and is living on her own and holding down a job. Ryan is a few years older at 26, and he has seen his share of life as well. It's refreshing to read about characters in this particular stage of life. Raw Blue is painful, dangerous, beautiful, and wonderfully romantic all at the same time. For the space of time I was reading it, I, too ate, slept, and breathed surfing. I was with Carly every step of the way, and I was incredibly satisfied with the ending she carved out for herself by the skin of her teeth. Definitely one of the best reads of my year so far.