I'll Be There by Holly Goldberg Sloan 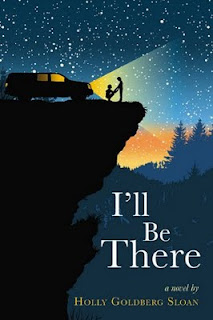 I don't know. I just don't know how any self-respecting book lover can see this book and not have to buy it immediately. I mean, look at that cover. It's gorgeous and haunting and somehow bursting with meaning all at once. As I mentioned before, it reminds me very much of the exquisite cover of Marcelo in the Real World

--a book I loved without reserve. All that put together had me on the edge of my seat to read it, and I had a lovely copy all ready and waiting for me on the nightstand in the nursery when I got home from the hospital. I tend to go through a massive rereading binge after having a baby. Like my battered body and mind need the comfort of intensely familiar stories and friends as part of the recovery process. But this was the first new book I read once I felt sufficiently rejuvenated to take on a whole new world. The physical book itself really is put together perfectly. The dust jacket has a matte finish that just calls out to be stroked. It was quite literally a tactile as well as a cerebral pleasure reading this beautiful debut novel by Holly Goldberg Sloan.

It all starts with a song. A song sung badly in church by a reluctant girl by the name of Emily Bell. But the song meets the ears of one Sam Riddle. A boy who doesn't believe in anything anymore but who sits in the back of church pews whenever he gets the chance. Just to hear the music. And though the song is sung so very badly, something in Emily's voice reaches out to Sam. They come from very different worlds and have next to nothing in common. Sam and his unnaturally quiet little brother Riddle have been on the run with their con man father as far back as they can remember. Never allowed to go to school, always expected to take care of themselves, they are used to being uprooted from whatever hovel they're currently living in whenever their father gets the itch. Emily has a loving father and mother, a perfectly normal younger brother, and they've lived in the same place as far back as she can remember. There's so much they can't tell each other, even if they did have the words, but the peace they feel together feels like enough to bridge the gap. But the past catches up with Sam and Riddle, even as these two lonely boys begin to imagine a different kind of life surrounded by the warmth and welcome of the Bell family.

I should just start by telling you to go buy this book. Go buy it now. It is so very worth it. If you've ever read Meg Rosoff's Just In Case

, the prose reminded me a fair bit of that lovely, unique book. There's the same smooth flow of narration, coupled with a magical and inevitable sense of destiny and mingled hope and despair surrounding the characters and the paths they follow throughout the course of the novel. The point of view shifts between all of the characters in the book--a tricky feat that Ms. Goldberg Sloan pulls off effortlessly. Some voices are wistful, some pragmatic, while others are scheming and downright terrifying. But I dare you to read Sam and Riddle's thoughts and not fall hard for these two brothers who have survived against all odds. It's impossible not to sink all your heart and soul into hoping for their escape and it's breathlessly painful to watch the predator in their lives stalk that slim chance of happiness with a single minded urge to destroy. Here's a favorite passage early on when Sam and Emily first meet:


She could not really sing.

That was just a fact.

But it was also a fact that she was riveting. She was raw and exposed and not really hitting the notes right. But she was singing to him.

He wasn't imagining it.

The girl with the long brown hair had her small hands held tight at her sides and, maybe because of how bad she was, or because she was staring right at him and seemed to be singing right to him, he couldn't look away.

She was saying she'd be there.

But no one was ever there. That's the way it was. Who was she to tell him such a thing?

It was intimate and suddenly painful.

Not just for her.

But now for him.

And just a few moments later:

Hadn't he spent his whole life running? The girl with the off-key voice and the glossy sheet of brown hair and the watery eyes was now gone.

The choir continued, seamlessly moving on to another song. But Sam was up on his feet as well. He didn't care that the big wooden doors made noise. He pushed down on the brass bar and was outside.

In moments he was around the back of the church and standing next to the girl who was in some kind of distress. He put one hand on her shoulder. Her eyes were all watery. He didn't want her to cry. If she cried, he might cry. Why would they go to that place?

But he'd learned how to make emotions go away. He was an expert at that. So why was he back here behind the church right now? He was supposed to be invisible. Right?

And then he found himself saying:

He was comforting her. The girl who couldn't sing and who had been so exposed. Her choir robe parted, and she shook it off and he could see she had on black pants that fit over her perfect little legs and a crisp white shirt that clung to her now small, sweaty body.

Sam suddenly wanted to scoop her up and maybe get on a motorcycle and drive away with her. Except he didn't know how to ride a motorcycle, but he'd seen that in a movie once on TV and the guy was wearing a military uniform and the girl knew him and she wanted to be scooped up.

And then, as she stared at him, it was all too much. She abruptly turned away.

And that's when her breakfast of toast, eggs, and bacon made its second appearance of the morning.

Because this girl didn't know him and, if she did, she would never want to have anything to do with him. This girl had taken once long, intense look at him and that, combined with her singing, had made her sick. He reached out and instinctively took hold of her long hair to keep it from the next retch.

He wished he had a rag or a towel or something she could use to wipe off her mouth. But he didn't and then the side door of the church suddenly opened and a woman was standing there. She said:

"Emily, are you all right?"

Sam dropped his hands and released her hair and stepped away and it was over.

He turned on his heel and took off, moving fast but without running.

And, really, it just gets better and more intense from there. It's a quietly riveting book that makes you feel as though the world is somehow both much larger and much smaller than you thought it was. And the minutely thoughtful and caring ways in which some of the characters look out for each other are beautiful to read, especially as they are related through such thoughtful and caring prose. I'll Be There

had me at hello, filled my mind with the sights and senses of these characters, and had me playing the title song over and over in my head for days after.