August 23, 2012
My birthday occurred last week and it was a lovely one, filled with sleeping in, unexpected flowers and jelly beans, Boston-style pizza, and cake made to order. But it started off in the wee hours with the best part. Just after midnight, DH asked me if I wanted to open the first part of my present. "How many parts are there?" I asked curiously. "Three," he replied. After some thought, I agreed and he brought out a promising package, just the right size and shape to fill my heart with anticipation. I quickly unwrapped it and slid it out of its protective clear, plastic slipcase. Beauty. The one I'd been wanting. For ages.

"It's a signed, first edition," he said.

They all were, as it turned out. 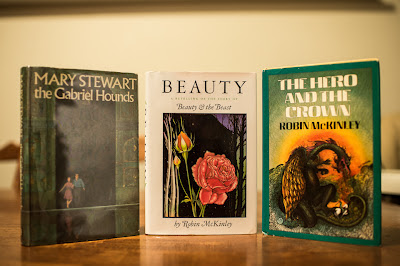 And I opened one later that day. And one the following day. Two Robin McKinleys and a Mary Stewart (Signed! I'd never even seen one of those before.) The boy knows me well, doesn't he?

I also received a stack of shiny, new pretties from my parents (Beauty and The Hero and the Crown already stuck in there with their new shelfmates). 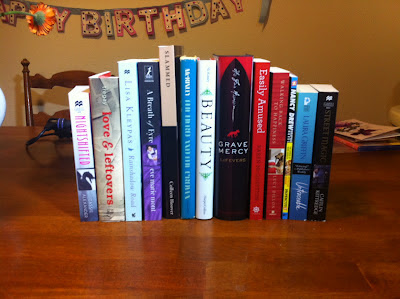 And to top it off, my perspicacious mother-in-law joined the excellently-themed birthday with much-needed new shelves to put the gifts on (I'm particularly fond of that corner one): 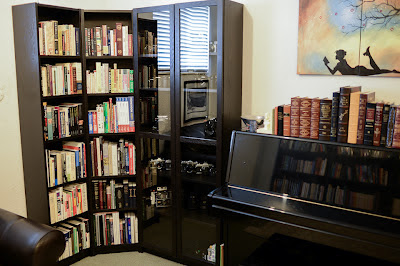 So as you can see, it was sort of perfect. As my dad has said for years, "We do birthdays well."