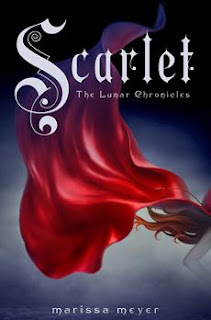 All right. I've officially waited as long as I could. The thing is--you need to know about this book. This sequel. Because it's coming in less than two months and I want you to be ready and not sitting around, twiddling your thumbs, wondering whether or not it'll be worth your time. Hint: it is so beyond worth your time. For those of you wondering, Scarlet is the sequel to Cinder, the first book in Marissa Meyer's Lunar Chronicles. Each installment is also its own fairy tale retelling. First we had Cinderella, now Little Red Riding Hood, with Rapunzel and Snow White yet to come. Ask me how much I love quartets? Go on. Ask me! But I'll be honest. At first I was skeptical with the fairy tale hopping and the completely new protagonists taking up valuable page time with no resolution in sight. I was a bit not okay with where Cinder left off, but the early word on Meyer's take on Little Red Riding Hood was extremely good. And, really, how long have you been longing for a standout retelling of this particular fairy tale? It has the potential to be so incredibly awesome, yet I just hadn't run across one to date. And so with all of this in mind I exercised restraint (I know) and reserved judgement.

Scarlet has misplaced her grandmother. That is to say--she was there when Scarlet left to work a shift at the local pub, and she was not there when she returned home once more. Nothing like this has ever happened before, and Scarlet has exhausted every last resource over the last few months trying to track her grandmother down. But the woman who for all intents and purposes raised her has vanished without a trace, and it isn't until a street fighter by the name of Wolf wanders into her pub that she encounters what might be hope. Of course, it doesn't look like hope all dressed up in scruffy wolf clothing. In fact, everything about Wolf screams out a warning and Scarlet hears that warning loud and clear. But he insists he has information that could be of use in her search. And so utterly against her better judgement, she agrees to follow him. Meanwhile, back at the model home, Cinder has managed to escape the prison and, along with her fellow prisoner and ne'er-do-well Captain Thorne, hijacks a ship. With the Lunar Queen hot on their trail, Cinder is racing against the clock to save her own neck and keep Prince Kai from enduring a fate worse than death. But no one is more shocked than Cinder when her path crosses with Scarlet's and Wolf's in what simply cannot be coincidental ways.


She did not know that the wolf was a wicked sort of animal, and she was not afraid of him.

With this one book, Marissa Meyer has cemented her creds with this reader. And I kind of love that she did it with the second book in a series, too. It exceeded expectations, but it also sent me running back to Cinder to retread all the introductory storytelling, simultaneously securing my love for Scarlet and enhancing my excitement for the next two novels. Quite the feat, that one. The world building in this series is top-notch, and with the second installment we get a wonderful change of scenery. The return to Earth itself (rural France to be precise), was a smart move as it grounds Scarlet and her unique story in an entirely different way from Cinder's. They're different girls. Their lives, their backgrounds, their hopes and dreams are profoundly different. At first I worried about the alternating point of view chapters. I never knew who I was going to be with or for how long. And while I initially quite preferred being with Scarlet (and Wolf), it wasn't long before Cinder (and the hilarious Thorne) won me over again. The ambition of the narrative ramped up right along with the intertwining of the plots. It was organic. I concerned myself with each of them and with the ways in which their individual lives were being altered by the unholy force and far reach of the Lunar Queen. But this story is all Scarlet's. Scarlet--with her threadbare trademark hoodie and her carefully measured thoughts and actions. I loved the intimate admission we receive to her life. The arc of her relationship with Wolf is quiet, sometimes the quiet of first snowfalls and hidden glances and sometimes the quiet of cold sweats and incapacitating fear. It was a perfectly delineated arc, one that crept into my heart on the softest of paws. As you can tell, I kind of have a thing for this book. I wouldn't change a thing about it. It slid handily into the first slot on my Best of 2013 list like it wasn't even trying. So do the right thing. Pick Scarlet up the day it comes out. The better to kick off your new year's reading with, my dears.

Scarlet is due out February 5th.

Linkage
Another Novel Read - "I was hooked so hard."
Carina's Books - " . . . you must read Scarlet the moment it comes out. It is more than worth the wait."
Cuddlebuggery Book Blog - "Scarlet is fantastic."
Good Books and Good Wine - " . . . it makes me want to keysmash all kinds of words of love."
Makeshift Bookmark - "We have a story here, folks."