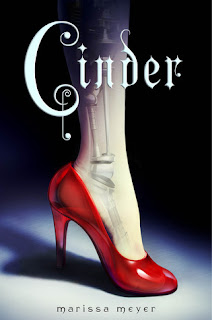 This cover. This cover is in the running for my favorite cover of the coming year! I love it that much. And I love the title. And, even more than both of those put together, I love the premise of a sci-fi/cyberpunk retelling of Cinderella with a cyborg as the main character. You should have seen my face when I first found out about Cinder. It's like Marissa Meyer asked me for my list of all that is good and then slapped them together into this book. Add to that the fact that it's the first in a quartet (oh, how I love quartets, see this one, and this one, oh, and this one over here), and the name of the series is the Lunar Chronicles. I don't know . . . it kind of seemed like this book and I were a match made in heaven. I've been reading sci-fi for as long as I can remember, and I feel like we don't get enough of it these days in young adult fiction. So I would have been on board for that aspect of the book alone. But a sci-fi/fairy tale mashup? Fuggedabout it. And so it was with much relief that I started it and found out it was legitimate on both counts.

Linh Cinder is a mechanic and a cyborg. Orphaned as a child in a terrible accident, her life was saved when doctors intervened, replacing her missing hand and foot with metal ones. Now she works long hours in her stall at the market in New Beijing, and she goes home to a loveless household headed by her evil stepmother. There's certainly no love lost between these two. But while her older stepsister Pearl takes after her mother in every respect, her younger stepsister Peony is as innocent and sweet as Pearl and her stepmother Adri are cynical and conniving. Unfortunately, Cinder also has the question of class working against her. Cyborgs are second-class citizens in every way. Looked down on, and often outright loathed, by the people of New Beijing, cyborgs are the first to be offered up for medical testing and the last to be invited to social events such as, oh, say--a ball. Incredibly, our girl Cinder is headed for both, though she has no idea yet. Then one day the emperor's son Prince Kai shows up at her stall with an android in need of repair. The emperor himself is dying of the deadly plague letumosis, which has been decimating the population for the past decade. And before she knows it, Cinder is caught up in  both the fight against the disease and an unlikely friendship with a young man who has his own set of problems.

Cinder is quite a serious book, both in the sense that it takes itself seriously and that it deals with serious issues, such as death, disease, class conflict, and war. I think I was expecting something lighter, but the whole taking-itself-seriously and the fascinating world building quickly set me at ease. I loved the attention to detail with which Ms. Meyer depicted the grimness of Cinder's life and her world. She's a mechanic and an outcast. She wears castoff coveralls and a worn-out work belt in place of the flouncy dresses and jewels other girls her age are flaunting. And her outlook matches her clothes. Cinder is a realist, and that is my favorite thing about her. She knows the way things work. And mechanics with steel appendages do not make good with emperors' sons. No matter how charming they may be. As a result, there is very little of the lovelorn teenager about this girl. As much as she slowly allows herself to enjoy the prince's company, not once does she fool herself into forgetting the horror that would blossom on his face were he to discover what she is. Instead, she reserves the majority of her emotional energy for fixing up an old car she finds in the junkyard, harboring the long-shot hope that it just might serve as an escape vehicle when the time comes that she can no longer stand her abysmal home life. Then when the plague strikes close by, Cinder taps already flagging reserves of strength to help and support the ones who are stricken. She's tough and pragmatic. We like Cinder, yes we do. Then there's Kai. Prince Kaito. What you need to know about Kai is he's . . . very cute actually. Determined to do right by his own obligations, he won me over as he did Cinder for being more than he seemed. At the same time, this is the aspect of the novel that needed more development, in my humble opinion. I liked that the story took its time, but with all that time, there wasn't actually much of it devoted to these two developing their relationship. What was there was good. I just needed a little more. Perhaps a better way of putting it would be, I wish that the relationships between characters had benefited from the skill applied to the world building and the awesomely creeptastic villain. There's quite a buildup by the end (the end is possibly the best part). But just when things finally get going, it ends. On one big, fat doozy of a cliffhanger. Which is fine. I'm not opposed to cliffhangers, per se. But I did expect just a hint more in the way of resolution depth for such a slow cycling climax. I was left wanting. My needs aside, I thought the characters deserved to have it out. I realize there are three more books in the series, and there is clearly more to come. I just could have done with a little more emotional payoff to keep me believing, if you will. That said, I loved each of Marissa Meyer's clever sci-fi tips of the hat to the elements of the original fairy tale. Word is the next books will incorporate more fairy tales, including Rapunzel, Red Riding Hood, and Snow White. Color me intrigued (and hopeful) for more development in future installments.

Cinder is due out January 3rd.