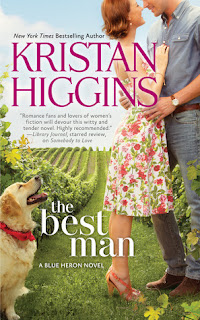 Sometimes you run across a certain author at just the right time. In my case, it often happens post-some trauma or other, when I am . . . depleted, if you will, and sorely in need of something that will wrap me up in its charm or beauty and give me back a little bit of what I lost. Kristan Higgins is one of those authors. I discovered her not long after having my third baby (never in a million years did I think I'd have cause to use that phrase), and the laughter and hesitant, honest emotion her stories provided served as a balm. She has a nice backlist, and I blew through it with gusto. A few became dear favorites, others merely pleasant ways to pass the time. I tend to think there's probably a Higgins book for everyone, and I'm ever curious as to which one works for which reader. My top three are All I Ever Wanted, Catch of the Day, and Until There Was You. I foresee rereading them indefinitely. All of which is to say that I always look forward to her new releases. With the publication of The Best Man, Higgins embarks upon a series set in the Blue Heron region of the northeast.

Faith Holland has stayed away as long as she can. Nothing has gone right since she left her home, and a string of unfortunate relationships has left her doubting the existence of happily ever after. But the last disaster takes the cake, and Faith returns home to her family's winery to see if she can't find her way to seeing things clearly again. Of course, coming home means seeing her ex-fiancé Jeremy again and attempting not to murder him for leaving her at the alter all those years ago. No mean feat, that. It also means attempting to retain her sanity amid her inane, but lovable family's quirks and foibles. So when she crosses paths with Jeremy's best friend (and former best man) Levi Cooper, Faith is spoiling for a fight. Levi just stood by and watched as Jeremy called it quits. Faith is sure he could have done something to avoid the catastrophe and didn't. As a result, she isn't about to let him meddle in her life again, chief of police or no. For his part, Levi is decidedly less than thrilled to see his best friend's ex-fiancée back in town. Faith always did get in the way of things, with her endless cheerfulness and attached-at-the hipness to Jeremy. Add to that the fact that he's not best pleased with women in general these days, Levi is determined to have nothing to do with her. Circumstances fail to cooperate with Faith and Levi's wishes, however, and it isn't long before they find themselves forced to reevaluate their original opinions of each other.

There is a lot going on in this novel. Even for Higgins. From crazy family members en masse and numerous painfully failed marriages to the unwilling reliving of high school drama and surprisingly traumatic pasts, it's a certifiable festival of emotions. And for a little while I was uncertain as to how well I would sink into this dramedy served up on a platter. Though they are admittedly attracted to each other upon her return, Faith and Levi's enmity runs deep on both sides. While I liked that they didn't just fall into each other's arms, I did struggle a bit with the way they handled each other. I didn't quite have the context to support it. But then Faith got a glimpse of what Levi's life was like, both before and after she left home. And with that glimpse, I sank in. For while there was a bit much going on on some fronts of this novel, there were other areas in which the layers utterly suited me. One of my very favorite things about Higgins' novels in general is the consistent way in which she acknowledges that families are imperfect. That growing up reveals these imperfections. That they hurt. And that sooner or later we are all forced to address them and see if we can't somehow embrace them and move on. I truly enjoyed reading about Levi's history, growing up on the wrong side of the tracks, his unexpected friendship with Jeremy, his mother, his sister, joining the army and shipping off to Afghanistan. I was similarly involved in Faith's background, in her struggle with epilepsy, her combative relationships with her sisters, and her desire to create something lasting and beautiful. It was these layers, along with (as always) the gradual reconciliation and development of their relationship, that earned The Best Man a spot on my keeper shelf. While not perfect (a few annoying moments and some potential threads left unexplored), it has that undeniable heart that I've come to expect and rely on in a Kristan Higgins book. 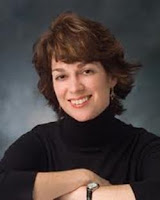 1) What book is on your nightstand right now?
There are two, actually: The Ugly Duchess by Eloisa James, and My Kind of Christmas by Robyn Carr. I’m also pretending to read Empire Falls by the mighty Richard Russo, but I don’t think I’m going to finish that one before my book group meets. (Sorry, Mr. Russo!)

2) What’s the last book that kept you up all night to finish reading?
The Life of Pi by Yann Martel. What a remarkable and beautifully written book!

3) When did you first consider yourself a writer?
You know, it took a while! I think a lot of us writers have the imposter syndrome…you know, where you’re convinced that anything decent you’ve produced thus far is just a fluke. My fourth book, Too Good to be True, was difficult to write, and that was the first time I had to struggle. When it was finally done, and when I still wanted to write another, I thought I might be a real writer after all.

4) Where’s your favorite place to read?
There’s this big squishy green chair in our living room. Our cute little mutt jumps up and wedges herself in with me, and it’s heaven.

5) What books have influenced your life the most?
To Kill A Mockingbird by Harper Lee; Gone With the Wind by Margaret Mitchell; Abide With Me by Elizabeth Strout. Though there are dozens of books that have influenced me, these are the books I read again and again.

Linkage
The Book Barbies - "I have officially found a new book boyfriend."
The Book Binge - "It's been a while since I've laughed this much while reading a book."
Book Harbinger - "What I love about Higgins is that I can depend on her to be relatively clean and always fun."
The Bookpushers - "I can’t rate this book highly because of what occurred."

Dear Author - "I found parts of it so amusing that the part of me that just wants to laugh and have mindless fun really liked this book. Reading it made me feel bi-polar."
On the Wings of Books - "Higgins’ books make me laugh and tear up a little bit (or a lot)."
Parajunkee - "Kristan Higgins writes sigh-worthy HEAs"
The Pretty Good Gatsby - "The Best Man was my first Kristan Higgins’s book and I can assure you, it will not be the last!"
Romance Around the Corner - " . . . as much as I enjoyed the novel, I was left with the uncomfortable and unhappy feeling of having read a book whose flaws irrevocably tainted the original enjoyment."
Smexy Books - "The Best Man is a romantic contemporary that digs deep into your heart and funny bone and doesn’t let go."