Bibliocrack Review: All I Ever Wanted by Kristan Higgins 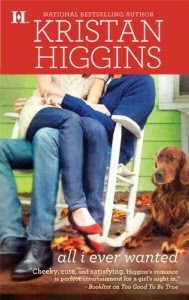 Calling all Julie James fans! Calling all Jennifer Crusie fans! Have I got a book for you. Of course, most of you have probably heard of Kristan Higgins before and are, in fact, already aware of the delectable treat that is her books. But just in case you haven't, I'm here to clue you in. I first discovered her as part of Sarah Rees Brennan's summer reading recommendations and (because I trust her so) I just went ahead and picked up a copy of All I Ever Wanted along with The DUFF. I am so very glad I did. Because this was the perfect book to read on the heels of The DUFF. And I'll admit I've gone on a bit of a Kristan Higgins binge after finishing it. And I don't regret a moment of it. What a wonderful find! And such an eminently recommendable one at that. I seriously feel I could hand this one to anyone. It makes me a bit giddy--the possibilities of passing this one on. It really does.

Callie (short for Calliope--ha!) Grey's life is reaching critical mass. And not in a good way. About to turn thirty, she's in some serious unrequitable love with her boss Mark. They had that one weekend a few years ago, but that's all it was. He's moved on (though he insists on flirting with her shamelessly in the office), but Callie just . . . can't. At least she doesn't live in her family's funeral home anymore, though they are holding her birthday party there this year. In the Tranquility Room, to be precise. And at night, Callie goes home to her curmudgeonly old grandfather and her beloved dog Bowie. Enter Ian McFarland, the new veterinarian in town. Despite looking rather unnervingly like a Russian assassin, he fits the bill as eligible bachelor, and Callie decides he just might be perfect for helping her move on from Mark. Unfortunately, eligible bachelors are few and far between in tiny Georgebury, Vermont. Add to that the fact that Dr. McFarland is about as tense and forbidding as they come, and things go south pretty fast for poor, well-intentioned Callie.

Perfectly delightful--that's what All I Ever Wanted is. I was giggling within the first few pages, and I immediately liked Callie because she is unashamedly herself. She's bright and bubbly and, well, honestly she's not my typical favorite kind of heroine. But she is also overtly honest with her emotions, and she gives as good as she gets when those around her chide her for being overly emotional or slow to recover from her lifelong crush. Her interactions with her insane-with-a-capital-I family are hysterical. Her parents are estranged, and her mother waltzes around the funeral home she runs, followed by the uber-creepy Louis, who insists on hitting on to Callie every time he sees her, heaping on the funereally sensual overtones with gag-inducing results. But it's her halting relationship with Ian that takes the cake for me. Whenever they're in the same room together, he spends most of the time being quietly appalled. Usually at Callie's constant effervescence, her ginormous hound, or some combination of the two. Callie, on the other hand, does her best to lure him out of his fortress of solitude by offering to do some PR for his new practice. These two together are just stellar. As Sarah Rees Brennan said, "I love people who are staggering around being staggeringly crazy in love." Just so. Callie and Ian's catastrophically awesome combination of sparkles and prickles filled me with joy. If you haven't had a chance yet, I do hope you'll give this one a shot. And believe you me, you'll be hearing more from me about Kristan Higgins in the very near future.