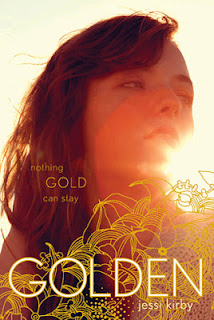 I feel like contemporary YA and I are going through a rough patch. We're having trouble seeing eye to eye. We seem to be going in different directions. We don't want the same things anymore. Take your pick. I realize this is likely just an unfortunate string of mismatches, but after a little while it's hard not to take it personally, you know? So much good chatter surrounded today's release of Jessi Kirby's Golden. Not having ready Kirby's previous two novels, I found myself curious about the fervor. Then I heard whispers of a decade-old unresolved mystery and something about Robert Frost and I was on board. Somewhat uninspiring Generic Sunlit Girl cover aside, I like that it doesn't lead the reader too much as to what to expect inside. That combined with my lack of knowledge of the author's work in general made it possible for me to go in with fairly untouched expectations. Which is always a nice thing.

Parker Frost (yes, that Frost her father maintains) is on the cusp of greatness. She's ready to blow the Popsicle stand that is her small-town home and head off to Stanford for some real living. She's got Valedictorian status in her hip pocket. The only obstacle remaining between her and her dream is a scholarship speech. Knowing Parker, she can slap that puppy out in her sleep and still have time for coffee with her best friend Kat. But when her English teacher asks her to send out a stack of journals to his old students, she stumbles across something that might force her to throw all her carefully laid plans by the wayside. That something is the personal journal of Julianna Farnetti. Presumed dead (along with her longtime boyfriend Shane Cruz) in a violent car crash ten years ago, Julianna has achieved the status of local legend by now. But as Parker gives into temptation and reads the journal, she realizes that not everything in the young lovers' lives was as it seemed. And now, inexplicably, Parker finds herself on a mission to resolve their deaths and, just possibly along the way, find the answers to her own burgeoning questions about the life that she leads and the kind of person she wants to be.

It started out well. I liked Parker fine. I liked the cute, somewhat fuzzily arrogant boy who seemed to have his eye on her. Though her best friend Kat immediately felt like the usual carboard cut-out, wilder than the heroine but with a heart of gold best friend that so frequently populates coming-of-age novels of this ilk, I figured as long as she didn't play too obnoxiously large of a role, we should be able to rub along tolerably well. Her mother was an irritatingly nebulous, overbearing presence in her life, but the mystery felt intriguing and, most of all, important to Parker. So I read on and found myself wanting to know more of Julianna and Shane and the mysterious Orion. Soon, I was far more interested in spending time within the pages of the journal than with the living, breathing teens in the present day who were fumbling to unravel the past. I had no trouble understanding Parker's preoccupation with Julianna's story, but I lost my preoccupation with Parker and hers. And since not all that much time is actually spent inside the pages of the journal, I found my emotions invested in the areas guaranteed to give me the least payoff. The boy (and his interest in Parker) never materialized, always shunted to the backseat. Kat did stay in the picture. And while I bought her affection for Parker, I longed for more depth between them. And then there is the title and the whole Robert Frost thing. And let me tell you, it is a Thing. Frost poems herald the start of each chapter, they run through Parker's head, they insinuate themselves into every fold and crevice of the story. And it was just too much for this reader, too much browbeating with the theme. I get it, Ponyboy. Nothing gold can stay. You've got to grasp life by the horns when you have the chance. I just don't respond well to the painfully earnest shoving of these truisms down my throat. I finished Golden actually angry. Angry at my time spent with another undifferentiated, underdeveloped, well-meaning contemporary. There. Is that cantankerous enough for you? For what it's worth (and as is the trend lately), I am alone in my high dudgeon.

Golden is out today.

Linkage
Alexa Loves Books - "Parker's journey is beautifully handled."
Confessions of a Book Addict - "Golden is on my "special" bookshelf dedicated to my favorite reads."
A Good Addiction - "Golden is a brilliant, aching must read of a book."
Good Books and Good Wine - "Golden does a wonderful job exploring the theme of myth versus reality."
I Read Banned Books - "This story hold more than just one note. Highly recommend!"
Ivy Book Bindings - "Golden is a novel that I emerged from a different person."
The Midnight Garden - "Writing like this is contemporary YA at its best."
The Perpetual Page-Turner - "Golden is a stunning book with incredible depth, a skillfully unraveled mystery and characters that I really loved."
Stories After Twelve - "This book blew my mind away!"