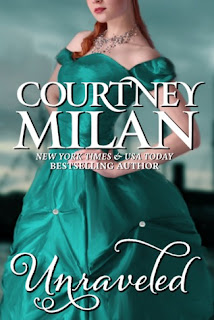 So I realized that while I spend rather a lot of time lauding the genuine charms of Courtney Milan's writing, I have only reviewed one of her books. And that one a novella. Personally, I think she's elevated the novella into an art form, but her novels are incredibly entertaining as well. It's high time I went back in the stacks and reviewed possibly my favorite of her full-length novels. Rose Lerner recommended this book to me early last year and, as it is the third in Milan's Turner Brothers series, I immediately checked out the first from my local library. I made short work of all three books and, while I do love Ash (the eldest brother and hero of the first book, Unveiled) with a warm, fuzzy sort of love, I do believe this third and final book (and brother) is my favorite. It helps when the author keeps a secret for an entire series, waiting patiently to reveal it all in good time. Smite Turner was that secret. And it was a decided pleasure accompanying Miranda and getting to know him on his own terms.

The streets of Bristol are a swirling den of card sharks and pickpockets, petty criminals, and masterminds. They fear no man. No man but the infamous Lord Justice. Known throughout the teeming city for his unsympathetic, single minded thirst for justice, Smite Turner's reputation has taken on a life of its own. And while he is unsympathetic and single minded, he is also wedded to his privacy. And Lord Justice's fabled courtroom showdowns do tend to get in the way of his carefully crafted life of solitude. Which is why when Miranda Darling winds up in his courtroom, he is loath to follow his instincts, all of which are clamoring that he has seen her somewhere before. For her part, Miranda is dismayed to realize she's caught the exacting magistrate's eye. Especially as she was in disguise at the time. Part of the network of the Patron—the leader of the local underworld—Miranda is required to appear in court from time to time to testify on behalf of people the Patron wants kept out of jail. Working her fingers to the bone as a seamstress and wig-maker, Miranda can barely keeping herself and her young charge afloat. She wants no part of anything that will put her in Lord Justice's path. Her luck has run out, though. When Smite sets his mind on finding the truth behind the lies, he sees it through to the bitter end.


Miranda shook her head slowly. "Good heavens. That's quite an act you put on."

He drew himself up haughtily. "I beg your pardon."

"An act," Miranda repeated. "Stand as tall as you like, and frown at me all you wish. I saw you just now. You were feeding cats."

"So I was. And do you make something of that?"

"You," Miranda said daringly, "have a kind heart."

He turned away from her, the tails of his greatcoat swirling about him. "Don't enlarge too much upon the matter. The cats were hungry. I had food. This seemed to be a problem with a ready solution. It's not kindness to solve problems; it's efficiency."

"I stand corrected. You have an efficient heart."

I don't know, guys. There is very little not to love about Unraveled. I went in with what I thought was a fairly accurate approximation of just how shut off Smite was. But the reality does rather take isolated to a whole new level. And given how thoroughly Ms. Milan portrays Smite's remoteness, I was amazed at how easily I accepted the introduction of an outsider into his life. And not just any outsider, but a confirmed accessory to several criminal activities. Now that might cast Miranda in a dim light, while nothing could be farther from the truth. Miranda is excellent. From her independence and earnestness to her checkered past and closeted loneliness, she shines throughout the novel. Together, they are a jumble of contradictions and uneven lengths. Smite is intimidating and impatient. Miranda is thoughtful and uncertain. But they are both of them weary of being ever alone. It is this key facet of their makeup that allows a measure of affection and need to ease its way into their interactions. And that small change in Smite's daily regimen is all that is necessary to set his life on a course he had not planned, one he abjectly disapproves of.


"I'm not broken," he repeated. "Although at the moment . . . " This was what came of violating the sentimentality quota. Everything he kept bottled inside him came out. He shut his eyes and pinched the bridge of his nose. "At the moment," he muttered numbly, "I may be coming a bit unraveled."

Poor Smite. It is painful watching him resist change and grasp Miranda's hand at the same time. As the agent of this change, it is an uncomfortable role she assumes. Uncomfortable in the extreme. But that need we spoke of. It is so dashedly real, living and breathing and pressing out against their fragile skins. I felt so much on behalf of these two lost ones and the ruthless choices they are forced to make. The specter of Smite's past is large enough and dark enough it casts a shadow upon every smile, every small happiness. That shadow is so palpable that I wondered right up until the end whether or not the coping mechanisms he put in place would allow enough give to accommodate joy. It was what I wanted for him, for both of them, and it was what they deserved. But, as is the case in my favorite novels, I would have accepted whatever ending Ms. Milan saw fit to give them, the writing is that clear and pleasurable. Unraveled was the book that forced my hand. I confess, I will read whatever she writes.

Linkage
Dear Author - "There were portions of the book I loved, including the dialogue exchanges between Smite and Miranda."
Feminist Fairy Tale Reviews - "It is very rare when every book in a series is considered a 5-Star read.  But, that is exactly what happened with Courtney Milan's epic Turner Family series."
Fictionally Inclined - "It made my heart happy."
Mayhem Reviews - "Courtney Milan writes exceptional historical romances."
Medieval Bookworm - "Milan never puts a foot – or a word – down wrong."
Smexy Books - "What I love about a Courtney Milan book is that every scene, every sentence feels delicately crafted."