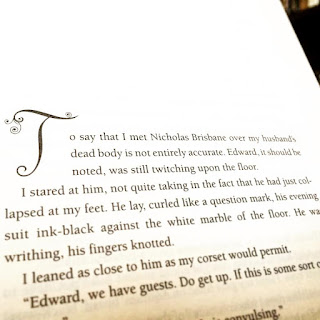 So get this. In all my years of blogging (I can't believe I just typed that), I've never written up a post on my favorite literary opening lines! This strikes me as funny given the fact that I somehow have made time to discuss my favorite first kisses, favorite endings, favorite big bads, and all manner of other Very Important Lists. So. Today, we're going to dig into the best first lines, the ones that sucked me in so fast my head spun. For purposes of space, we're going to exclude classics. I know. It's just that once I get started with Austen, Dickens, Tolstoy, etc., I have a feeling we'll start spiraling out to sea.

Some of these lines make me laugh. Some make me cry. Some fill me with the kind of nostalgia only a pivotal book in my life does. And some woo you in gently with their come-hither eyes, deceptive in their simplicity. No matter their ilk, all of them belong to books that reside firmly on my Beloved Bookshelf. And so. Favorite opening lines that are not, "It is a truth universally acknowledged . . . "

Side note: I thought about organizing these by title, by author's last name, by the order in which I read them, by order of personal preference, etc. In the end, I went with the far more scientific order in which they came to mind.

"It was a dumb thing to do but it wasn't that dumb. There hadn't been any trouble out at the lake in years. And it was so exquisitely far from the rest of my life."
– Sunshine

"Three children lay on the rocks at the water's edge. A dark-haired little girl. Two boys, slightly older. This image is caught forever in my memory, like some fragile creature preserved in amber."
– Daughter of the Forest

"To say that I met Nicholas Brisbane over my husband's dead body is not entirely accurate. Edward, it should be noted, was still twitching upon the floor."
– Silent in the Grave

"Theo, by occupation, was a devil."
– Westmark

"The pipe under the sink was leaking again. It wouldn't have been so bad, except that Nick kept his favorite sword under the sink."
– The Demon's Lexicon

"When I stepped out into the bright sunlight from the darkness of the movie house, I had only two things on my mind: Paul Newman and a ride home."
– The Outsiders

"It was a dark and stormy night."
– A Wrinkle in Time

"There was a boy called Eustace Clarence Scrubb, and he almost deserved it."
– The Voyage of the Dawn Treader

"My father took one hundred and thirty-two minutes to die. I counted."
– Jellicoe Road

"When the lights went off the accompanist kissed her. Maybe he had been turning towards her just before it was completely dark, maybe he was lifting his hands. There must have been some movement, a gesture, because every person in the living room would later remember a kiss."
– Bel Canto

"On a cold, fretful afternoon in early October, 1872, a hansom cab drew up outside the offices Lockhart and Selby, Shipping Agents, in the financial heart of London, and a young girl got out and paid the driver. She was a person of sixteen or so—alone, and uncommonly pretty. She was slender and pale, and dressed in mourning, with a black bonnet under which she tucked back a straying twist of blond hair that the wind had teased loose. She had unusually dark brown eyes for one so fair. Her name was Sally Lockhart; and within fifteen minutes, she was going to kill a man."
– The Ruby in the Smoke

"The angel Gabriel went to the oracle on Mount Sinai, looking for a wife."
– Archangel

"The whole affair began so very quietly."
– Madam, Will You Talk?

"It is the first day of November and so, today, someone will die."
– The Scorpio Races

"On Christmas morning, Rebecca lost her moral virginity, her sense of humor—and her two best friends. But, other than that, it was a hell of a holiday."
– The Road Home

So which would you add to the list? Do we share any favorites? And, perhaps more importantly, do any of these entice you to run out and grab the book right now?